“It was awesome,” Genna said of selling nearly all her pieces on display.

The tattoo studio is one of the many diverse businesses across Long Island, from coffee shops to movie theaters to medical offices, that open their walls to unsung local artists and photographers to showcase their work.

Empire Tattoos hosts four themed exhibits a year, each with an opening night that includes food and drink, live music, a merchant’s table, and as many as 200 attendees. Manager Tiera Gonzalez said the studio has developed a reputation that has attracted many artists to participate in the exhibits, patrons who buy their work, and sponsors from Blue Point Brewing to Converse. It helps, of course, that the studio’s owner is Tommy Helm, star of Tattoo Nightmares on Spike TV, who has staged these exhibits since opening in 2007. 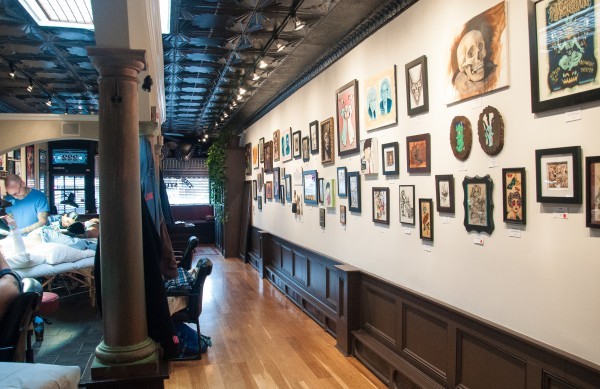 Empire State Studio Tattoo Gallery in Oceanside exhibits the work of unsung local artists and photographers on a 32-foot-long wall.

“Between us promoting it and getting sponsors in here, we kind of guarantee for people to see your stuff, not to mention that the show is open for a nice amount of time,” Gonzalez said.

Helm and Gonzalez choose a theme and the art and photos to display across a 32-foot-long wall for each exhibit. Genna, a Bay Shore resident, was among ten regional artists whose work was selected for last fall’s exhibit, after she had featured in a few solo shows at the studio. While previously Genna had drawings displayed in a skateboard design show at an art gallery, she prefers the nondescript commercial venues.

“I definitely would like to do more of the smaller places, like the local coffee shops,” she said. 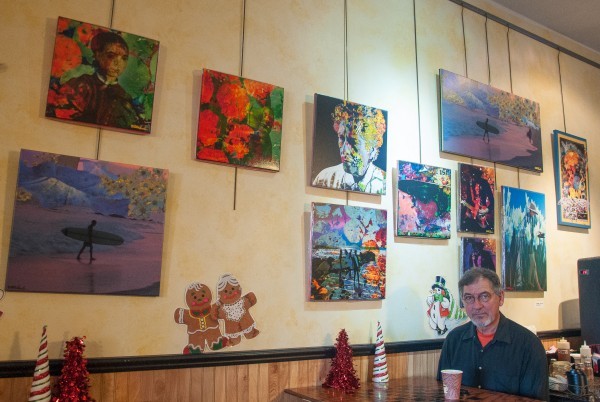 Nick Meola, a mixed media artist, has curated exhibits at Coffee Nut Cafe in Long Beach for the past 10 years. He defines success not primarily by the number of sales made at the coffee shop, but rather the interest the painters and photographers generate in their work, in the form of business cards taken, websites visited, and phone calls and connections made.

Meola tells stories of exhibitors whose work later landed on the pages of magazines or graced the home walls of wealthy Manhattanites who summer in the beach town and patronize the Coffee Nut Cafe.

“More often than not, the first-time exhibitor winds up selling a piece or two and that spurs a whole new interest in their work, and immediately you can see the change in their work,” Meola explained. “They become more confident and a deeper sensation of what they are striving for in their work comes to the surface.” 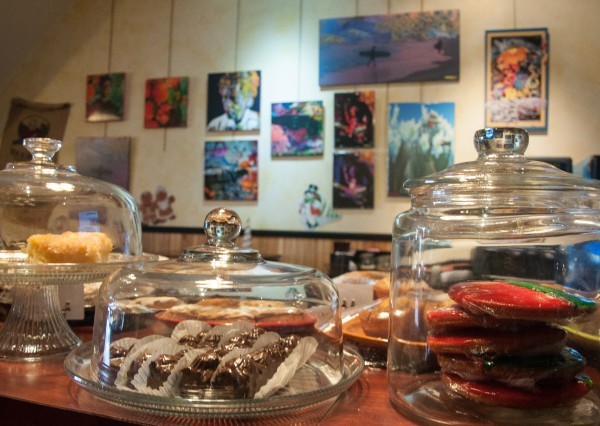 Meola manages a roughly 21-day rotational schedule and a four-month waiting list. He exhibits the paintings and photos on a tall, spacious wall above high tables and stools where patrons can sip coffee, observe and contemplate. Coffee shops are an ideal business for artists to exhibit their work, Meola said, because of their steady volume of traffic and the opportunities they afford to meet, sit and chat with patrons. “For five bucks, people can spend a couple of hours in a coffee shop,” he added.

A painter from Glen Head, Byron Nernoff finds there is a significant difference between displaying his colorful canvases at various privately-owned and public venues, including cafes, banks, libraries and government offices. At public libraries, for example, his paintings are displayed in conference rooms, usually downstairs from the main floor, which are locked unless an organization holds a meeting or event there.

“If people want to go and see the art, they have to knock on the door,” said Nernoff, who paints everything from the interior mechanics of watches to Biblical subjects. “You can’t have that.”

Conversely, when his paintings displayed for a comparable length of time at the Corner Copia Cafe in Port Jefferson, Nernoff said, he sold a few pieces. “You get a tremendous amount of exposure, because it’s open to the public and they’re open all the time,” he said. 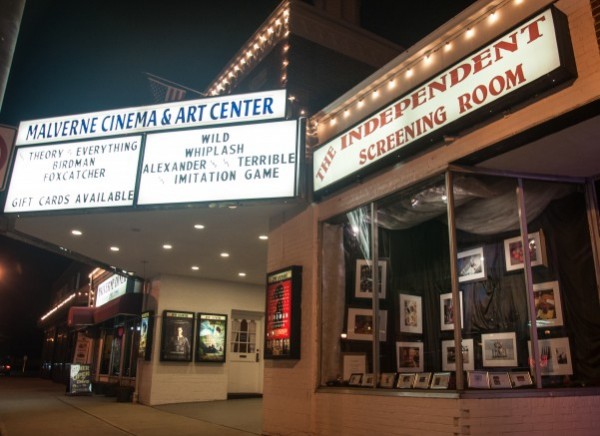 The Malverne Cinema & Art Center turned an adjacent coffee shop into a fifth screening room and donated the window to Long Island photographers to display their work.

Last December, Nernoff found a new space to exhibit his work. He asked his chiropractor, Dr. Scott Cavagnuolo, if he could hang three paintings in his office’s reception area. An admirer of his uplifting art, the doctor enthusiastically obliged, calling it a win-win situation.

“You have a local artist getting exposure for his work, and then someone like myself, I’m getting decorations in my office,” said Cavagnuolo, who is open to allowing other artists displaying their work on his limited wall space. “So, I’m able to change it up and have a different look in my office, which is good for me.”

In a twist on the coffee shop as mock gallery, Henry Stampfel, owner of Malverne Cinema & Art Center, turned a former coffee shop next door into a fifth screening room and later donated its unused storefront window to local photographers. For the past three years, they have displayed their snapshots in the window on a quarterly rotational basis. Stampfel said pedestrians often stop to look at the displays that sometimes generate work for the photographers.

As a board member of the Nassau Council Chambers of Commerce, Stampfel calls for more businesses with underused or vacant storefronts to employ similar displays to make their downtowns more appealing and to promote business.

“A lot of downtowns have lost their retail; it’s mostly service business, and this is another way of getting people to come to their local villages,” he said. “I think it wouldn’t be invasive and could become part of the landscape of Main streets. I just think it’s a home run.”