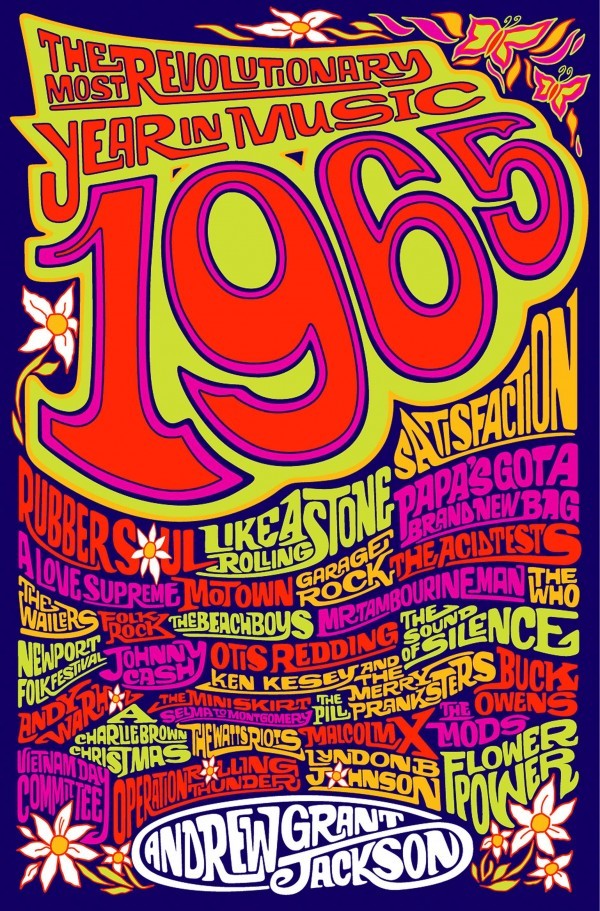 You turned up the volume – again.

Surely, the guy in the car next to yours must think you’re weird. There you are, groovin’ to your tunes, seat-dancing, singing along like you were in-concert. Really, is there such a thing as having the music too loud?

No. There’s not, so turn up the volume one more time and read 1965: The Most Revolutionary Year in Music by Andrew Grant Jackson.

As the year 1965 began, more than forty percent of Americans were under twenty years old. Teens emulated their parents then: boys wore short hair, girls wore long skirts. Segregation was common, color TV was new, eighty percent of America was white, and the country’s youth had tasted The Beatles and loved them.

Bob Dylan did, too, though John Lennon had once dismissed his music. The Rolling Stones were singing “puppy love” songs, while Barry Gordy hoped his Supremes might follow in Dean Martin’s footsteps since the “big money” was in nightclubs. Marvin Gaye, meanwhile, wanted to be “singing Cole Porter,” Malcolm X (who would soon be assassinated) met Martin Luther King, and thousands marched to Montgomery .

By the summer of 1965, President Johnson launched Medicaid, Medicare, and escalated America ’s presence in Vietnam . Sonny and Cher got you, Babe; everybody was dancing at discotheques; Barry Gordy hired “a charm school teacher” to prepare the Supremes for stardom… and Watts burned.

With 1965 winding down, Herb Alpert & the Tijuana Brass’s album whipped up interest. Frank Sinatra insisted that Sammy Davis, Jr. be allowed to stay at Rat Pack hotels, and Paul McCartney allowed a string quartet on “Yesterday.” Cass Elliot became a Mama, John Lennon insulted Carol King, and drug songs were hip. And so, at years’ end, was the premiere of A Charlie Brown Christmas.

I looked it up: time travel remains merely theoretical. Still, you can have the next best thing by reading “1965.”

This book will have you humming along with songs you remember (or recognize, if you weren’t around then). Author Andrew Grant Jackson melds history, music, and little-known anecdotes as seamlessly as butter but what’s most fascinating about this book is seeing
how times changed so completely in one year: we went from flattops to Beatle mops, from black segregation to Black is Beautiful, from “I Feel Fine” to “I Feel Good.” And, indeed, it was.

So is this book, and I think 1965: The Most Revolutionary Year in Music is what you should reach for next. If you’re an oldies fan, a follower of culture, or if you remember the year with fondness (or regret), how could you turn it down?