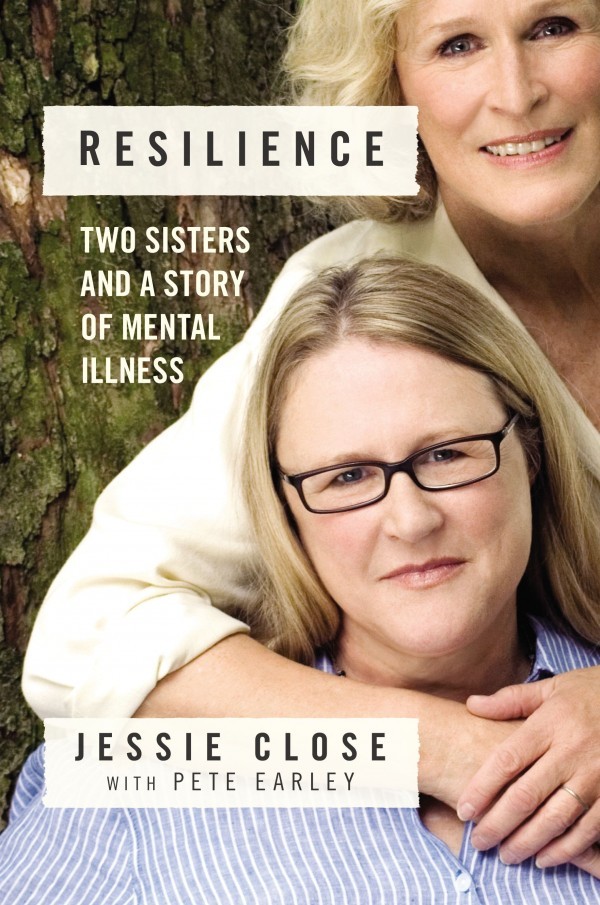 Your friends think you’re made of rubber.

You always bounce back, as they point out. You’re always happy when the good times roll but when they don’t, you reach for your bootstraps. Nothing lays you low for long because you just bounce back.

And it seemed that way for Jessie Close. But in her new memoir Resilience: Two Sisters and a Story of Mental Illness (with Pete Earley), she wasn’t bouncing back. She was bouncing around.

The Creature lived right behind her left ear. It had been screaming “over and over and over again,” taunting Jessie Close to kill herself. She didn’t want to do it, but that wasn’t the first time suicide had entered her mind.

Born the last of four children, Close had always been “the family troublemaker.” The trouble, however, wasn’t all hers: when she was five years old, Close’s parents joined the Moral Re-Armament, which was “a cult, plain and simple.” The family moved to New York , to an MRA estate where they were purposely separated. Eventually, Close’s father was sent to Africa and the family joined him there.

By that time, Close was “isolated and lonely,” prone to picking at a spot on her hand until it bled. She felt abandoned, and started acting out until she was sent back to the States, to various family members and schools in an attempt to control her behavior. She began drinking and sleeping around, much to her parents’ horror. At seventeen, she married her first of five husbands, a man whose abuse drove her further into the mania she’d been experiencing for years.

But the relationship Close had with him wasn’t the only thing that turned bad: through the ‘60s and ‘70s, she held a series of jobs in various parts of the country, married and left men impulsively, had an abortion and gave birth to three children. She received tentative diagnoses and medications but their effects didn’t last.

By the time Close neared her 50s, the Creature was winning….

Of course, there’s much more to this story and therein lies the issue I had with this book: there’s almost too much to take in when you’re reading Resilience.

Author Jessie Close (with Pete Earley) packs a tornado in this memoir, in the form of multiple moves, jobs, and loves. She’s here on one page and there a page later, only to move the story to a new locale again in a few paragraphs. Yes, you could argue that the narrative explains the illness, but it was a bit too much.

The appeal of this book, I think, lies between those lines. Close brings readers to the edge with her, clearly giving us a sense of the helplessness and fear that accompanied her mental illness. That, not the frenzied travelogue, is what’s worth reading.

Add in a few second-viewpoint chapters from big sister Glenn and you’ve got a memoir that, as a whole, is pretty powerful. See if you can overlook the relentlessness of it, and Resilience could be a book you’ll bounce for.