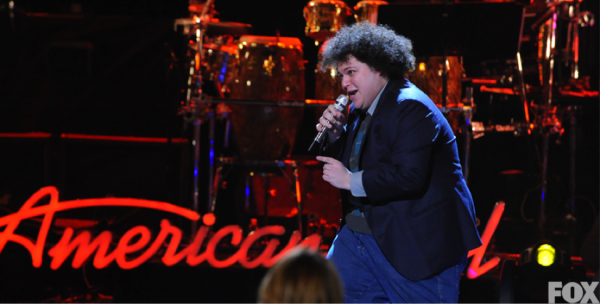 Wednesday night’s episode of “American Idol” sparked the beginning of 12 hopefuls’ musical careers. But sadly, it marked the end for Long Island native Adam Ezegelian. Ezegelian, 21, of Wantagh, New York was eliminated from the singing competition after not receiving enough votes or earning the judges’ two wild card picks to round out the Top 12 contestants.

As Ezegelian waved enthusiastically to the crowd at the end of the show, there were some assurances this may not be the last time fans hear of the student, who was majoring in toy design at the Fashion Institute of Technology before he decided to try out for Season 14. Revisiting that life-changing audition may be bittersweet now, but it’s worth noting since last night’s theme forced each contestant to sing the song they originally chose for their first audition.

The moment Ezegelian walked in for his audition with his signature curly coif, plaid shirt and flip-flops and gave each of the judges their own personal caricature drawn by hand, you just sensed Ezegelian was anything but predictable. With an incredible sense of humor and innate ability to entertain, Ezegelian was a breath of fresh air for the competition early on, and he proved during his audition that rock ‘n’ roll doesn’t have to be dated by singing Steppenwolf’s “Born to Be Wild” a cappella. But before the judges handed him a golden ticket to Hollywood, Ezegelian was prompted by judge Jennifer Lopez to show them something different and more mature. And he did with the hit song “I’m Yours” by Jason Mraz, which advanced him to the next round.

Boasting a musical theater background and Guitar Hero bragging rights, Ezegelian has been singing ever since he could remember and performed live for the first time when he was 13. Sonically, Ezegelian is the musical hybrid of Jack Black and former “Idol” alum Adam Lambert, who are coincidentally two of Ezegelian’s musical influences along with Jason Mraz and Stevie Wonder. And those influences were made more apparent in each of Ezegelian’s performances during Hollywood Week, where he fused his own artistic nuances and powerhouse vocals into popular songs such as Michael Jackson’s “P.Y.T. (Pretty Young Thing)” and Whitesnake’s “Here I Go Again.”

Ezegelian managed to effortlessly tackle different genres of music, while staying true to his soulful roots when the contestants performed in Detroit for a live audience. After a thunderous rendition of Twisted Sister’s “I Wanna Rock” and a slower version of the Jackson Five’s “I Want You Back,” judge Harry Connick Jr. said Ezegelian was dangerous and “impressed him with his powerful, accurate voice.”

And while Ezegelian won’t get the opportunity to continue to sing for our votes, we’re left with a bit of hometown glory for the guy who always engaged the crowd with his wide vocal range. Ezegelian left the show with a lasting memory in the same way in which he began, where we got our first glimpse of him posing in front of the “Welcome to Wantagh” sign.