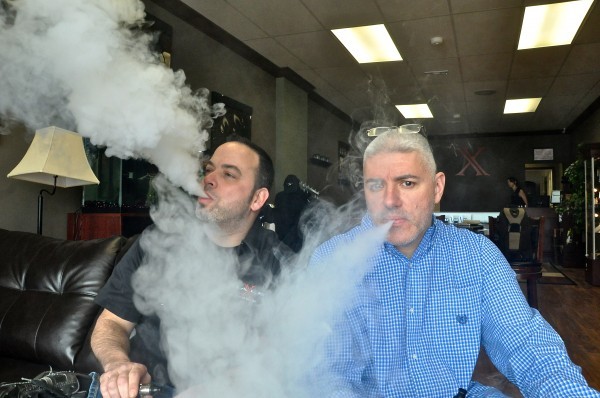 Xhale Custom Vapors is nestled in a nondescript strip mall in Ronkonkoma. But the shop’s interior sports a brown leather couch, sage walls, and cherry wood tables and chairs and glass display cases, a decor designed to distinguish it from hookah bars and head shops.

Xhale is among a small but growing number of establishments on Long Island that sell people on “vaping,” the lingo that describes the use of e-cigarette devices to draw on nicotine-infused, tobacco-free liquids that produce vapor mists.

While other vapor shops stock mass-produced, flavored e-liquids that come pre-packaged and ready to use in rechargeable devices, Xhale’s owners, Steve Smith and Douglas Cambria, concoct custom-made solutions. These “juices,” as they are called, come in hundreds of flavors, including multiple fruits and desserts. But Xhale customers can choose thousands of combinations of these flavored e-liquids, as well as varying levels of nicotine strengths (0 to 24 milligrams) in dropper-like bottles. 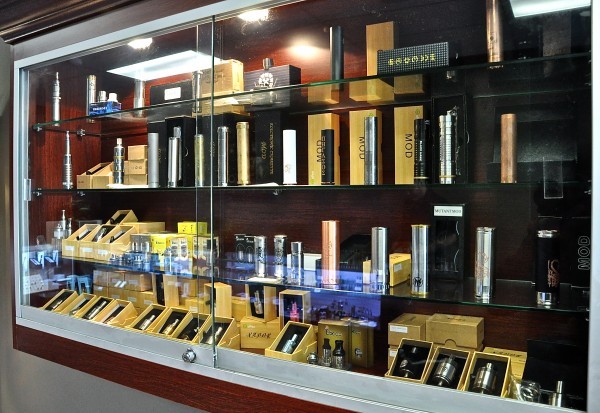 The shop caters to two types of customers: the long-time cigarette smoker looking to quit and the advanced e-cig user. Among the latter is Eric Hampton, who started to patronize Xhale soon after it opened in January 2014. The 39-year-old started and quit smoking during his 20-something years, but he still desires the physical aspects of holding and smoking cigarettes, which he found relaxing. Like the typical vaping newbie, Hampton first used the e-cig devices that resemble pens.

“I still like the idea of sitting around playing cards and smoking, but it just wasn’t an option,” said Hampton, who vapes using nicotine-free liquids and customized flavors. “And vaping kind of gave me a way to do that without actually smoking again.” 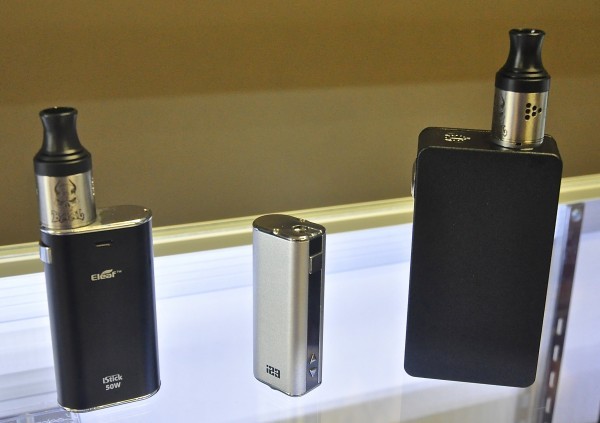 A line of vaping devices on display in a case at Xhale Custom Vapors in Ronkonkoma. Image: Joseph Kellard

Now he uses devices that are shaped like a miniature walkie talkie, called a Box Mod, which features a larger tank to hold more liquid, a more powerful battery, and stronger coils. All of this produces a more robust draw and vapor mist. Advanced users like Hampton like to “blow clouds,” the large billows of vapor that resemble clouds of smoke.

“The extra flavor that you get out of the larger unit and the power that it puts out, it becomes a bigger vape,” Smith said.

The rechargeable devices range in price from $25 for the pen-like start kits to $700 for large-sized Box Mods or barrel-like units known as Mech Mods. 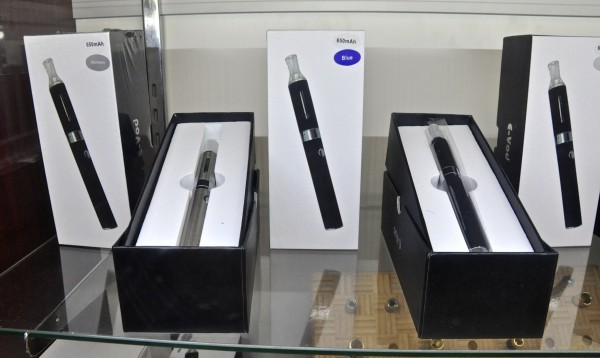 People new to vaping typically start off with pen-like e-cigarette devices, as shown in these starter kits. Image: Joseph Kellard

Cambria noted that if a customer smokes non-filtered cigarettes, such as Camel or Lucky Strikes, with nicotine in the area of 20 milligrams, he and Smith try to gradually wean the smoker on e-liquids from 19 milligrams to zero, to avoid potential withdrawals.

“Typically for us to match up to somebody that is smoking a pack of Marlboro Reds, the nicotine is quite higher as we start them out,” Cambria said. “As they get used to vaping, it’s a slow wean.”

While vapor shops and lounges are widespread in California and Florida, they remain relatively scarce and unknown in New York and Long Island. Yet last fall, Smith and Cambria were able to open a second establishment in Port Jefferson, complete with a granite juice bar. Their 1,100-square-foot facility in Ronkonkoma features a flat screen TV on which patrons watch everything from sporting events to YouTube videos on how to build coils. The partners host a comedy night, and they plan to hold cloud competitions. They also plan to open more shops.

But vaping is not without controversy. Advocates highlight that e-cigs are tobacco- and smoke-free and tout them as a healthier way to help people quit smoking. Opponents claim that, due to their nicotine content, they are an addictive drug that will harm people’s health and and will help to glamorize smoking.

Moreover, Suffolk County bans e-cigs wherever smoking tobacco cigarettes is prohibited, including restaurants, office buildings and parks, and sales are restricted from anyone under the age of 21. A similar ban is proposed for Nassau County, where anyone 19 or older can buy e-liquids.

Asked about the underlying reason for the ban, even though e-cigs are smoke-free, Cambria believes it is all about perception: “Vaping resembles smoking, so to a person who is not in the know, they look at it and think, someone’s smoking, they shouldn’t be doing that.”

Meanwhile, the Food and Drug Administration is reviewing e-cig technology in order to classify and regulate it. The agency is expected to classify e-cigs as a tobacco product because of the nicotine content, as well as ban e-liquid in its bottled form because people may drink the solution. Smith and Cambria fear these regulations could cripple small shops like theirs.

No matter, they plan to forge ahead and expand their locations as e-cigs grow in popularity, a goal they set from the outset.