Our extensive database of the region’s attorneys enables us to conduct a “peer review” method of distinguishing a select group. Attorneys were invited to nominate those whose expertise and practices were so outstanding in 10 specified areas, they could be considered the best. Some of their names are often in the headlines, advocating for a client or setting a precedent; some you may not have heard before. They are identified by our special “2015 Top Ten” logo—a designation spotlighting their honors. Click here to RSVP to our 2015 Legal Eagles Awards Dinner. 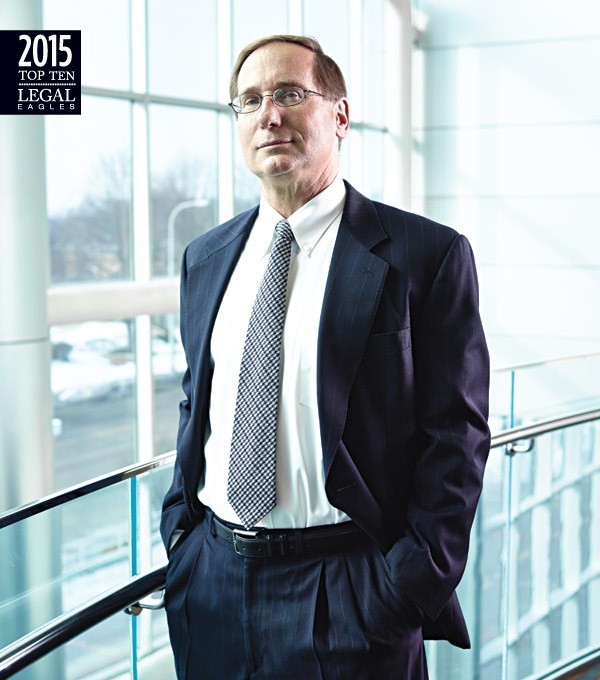 Thomas R. Slome, Member
Meyer, Suozzi, English, & Klein, P.C.
Banking/Finance
As chair of the firm’s bankruptcy practice and co-chair of the firm’s corporate finance practice, Slome represents a wide variety of creditors in all aspects of bankruptcy. Over the last decade, he has represented parties involved in some of the most notable cases including American Airlines, Blockbuster, Borders, Enron and Lehman Brothers, to name a few.

Slome is a board member of Big Brothers Big Sisters of Long Island, holds the officer position of treasurer and is chair of its board nominating committee. At the New York City Bar Association, he is chair of the committee on bankruptcy and corporate reorganization.

Slome credits his success to his early days as a newly minted graduate. After applying to hundreds of firms and being rejected, he began knocking on courtroom doors in hopes of securing a clerkship with a federal judge. At Bankruptcy Court for the Eastern District of New York, he found himself at the door of Hon. Robert John Hall. As a test, the judge assigned him to write a draft opinion on a case. It wasn’t easy but Slome fi led his draft—early. Judge Hall agreed with Slome’s draft on one of his most difficult cases and gave him the job. 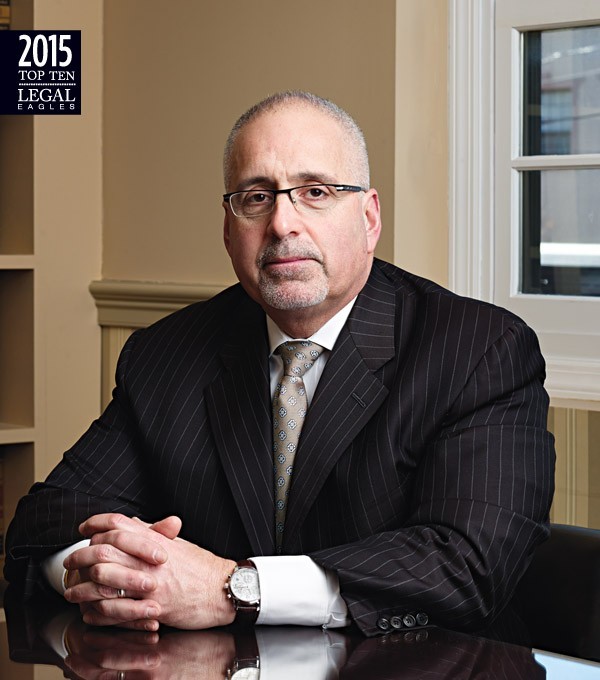 Marc Gann, Founding Partner
Collins, McDonald & Gann, P.C.
Civil/Criminal
This former Nassau County Assistant District Attorney is particularly adept at trial—he has appeared in the courts of New York City, Nassau and Suffolk Counties. Gann has handled major felonies and federal indictments—some of which included economic crimes, fraud and conspiracy. At the state court level, he has extensive experience defending major crimes, including murder. Alongside his associates at Collins, McDonald & Gann, he has provided defense of clients charged with narcotics and white-collar crime. In the 25 years since he formed the firm, Gann has also lectured to bar associations and the National Institute of Trial Advocacy. He serves as adjunct faculty at both Hofstra Law and Touro Law and is often counted on as a media source on issues of criminal law. 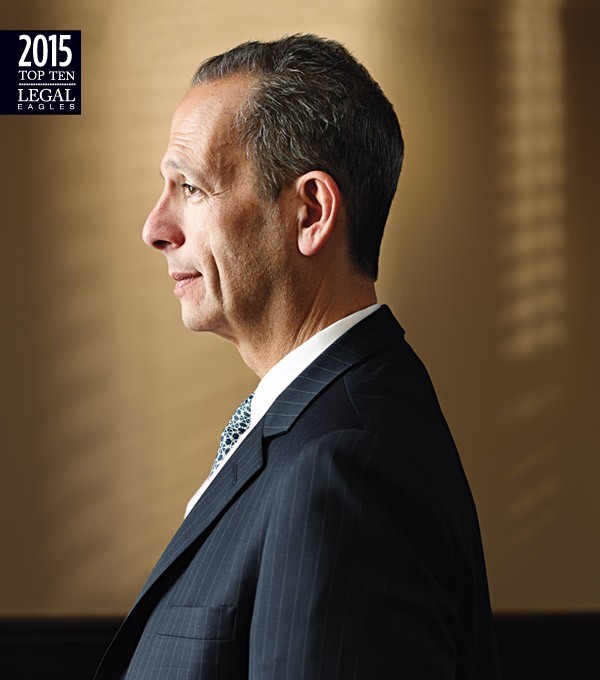 Steven L. Levitt, Principal
Levitt LLP
Corporate/Contracts
Both individuals and Fortune 200 companies have benefited from Steven L. Levitt’s representation for more than 25 years. Levitt’s approach to “practicing outside the box” hinges on getting to the elements of a case clients don’t think to ask, reporting a yield in clients’ successes in excess of $1.25 billion in just the last 5 years.

When a menswear manufacturer got into a license dispute with one of the largest retailers in the country, Levitt was chosen to work alongside a top firm to represent the client in a two-week long commercial arbitration in Manhattan. Levitt’s responsibility was handling cross-examination of key witnesses, all experts and other critical aspects like the damages. This past January, the case concluded with a $42.6 million award in favor of the client. 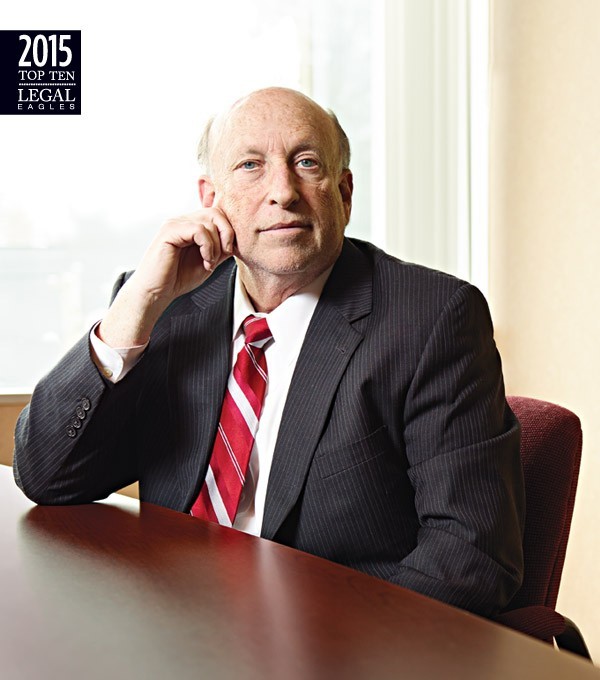 Jerome A. Wisselman, Founder
Wisselman, Harounian & Associates
Divorce, Child, Family & Matrimonial Law
When Jerome Wisselman founded his firm in 1976, he was already established in matrimonial and family law. But he recognized the importance of a full service firm having adequate resources—and professionals with relevant experience—and the firm has grown in size and scope to include real estate and other areas of litigation.

Today, Wisselman’s firm is among the largest matrimonial firms. One of the unique assets he brings to his clients is his accounting and tax law background, allowing him to navigate complex financial issues.

Wisselman gives back to the legal community as a member of the Board of Editors of New York Family Law Monthly. He also conducts legal workshops for mental health professionals to assist them in guiding patients through matrimonial litigation. 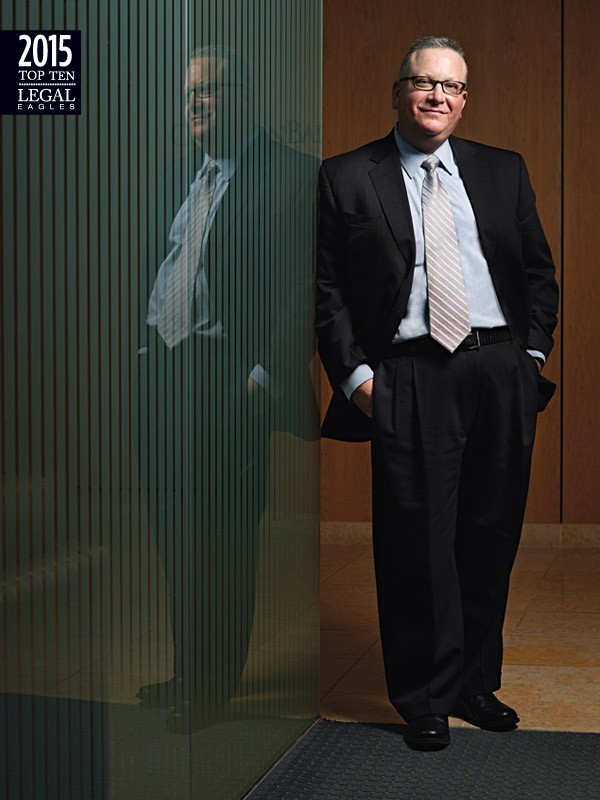 Paul S. Linzer, Partner
Certilman Balin Adler & Hyman LLP
Labor, Employment, Executive Compensation & Employee Benefits
Paul S. Linzer served as an Assistant District Attorney in the Nassau County District Attorney’s Office for approximately eight years before he joined the firm of Certilman Balin in 2000. Today, he is a partner in the labor relations and criminal law practice groups leveraging his trial experience, as both a prosecutor and a defense attorney, to represent clients in all aspects of public sector labor law litigation.

That client roster includes the New York City firefighters’ union; many county, town and village-level police unions; and the supervisors’ union from the New York City Department of Corrections. He concentrates on these clients’ grievance arbitrations, improper labor practice proceedings, policy negotiations, collective bargaining of contracts, interest arbitrations and drafting of potential legislation. But he also handles cases from another perspective: internal affairs, disciplinary proceedings and other internal or external administrative investigations. Linzer is admitted to practice in the states of New York and Florida, as well as the District of Columbia. He is also admitted to practice in the United States District Court for the Eastern and Southern Districts of New York, as well as the United States Court of Appeals for the Second Judicial Circuit. 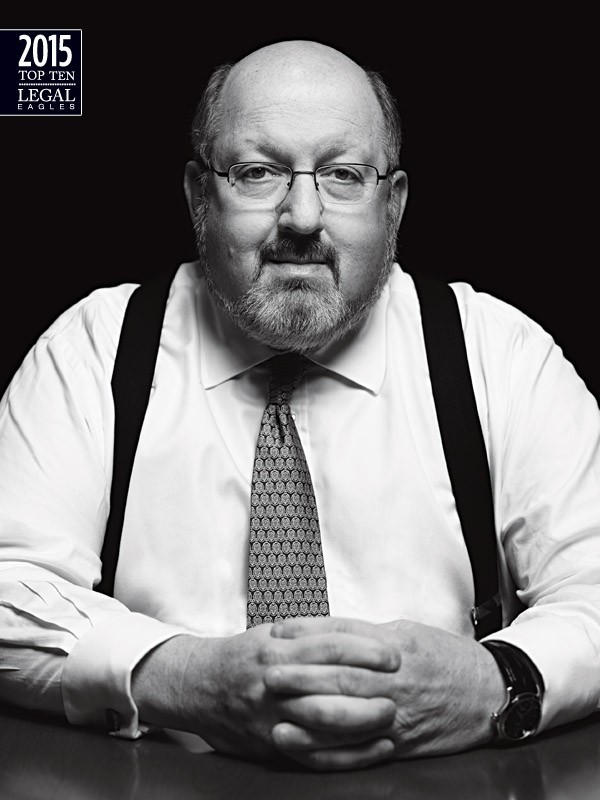 For certain government agencies, he has acted as special counsel. In the commercial world, he has served as a director of three publicly held corporations. Among his more unique cases are those in which he has litigated on behalf of elected offi cials, including the governor of the state of New York. Schlesinger has been appointed by the Appellate Division, Second Department as a member of the Character and Fitness Committee and served as the chairman of the Professional Ethics Committee of the Nassau County Bar Association. He’s also a member of the litigation committee of the American Bar Association and of the New York State and Nassau County Bar Associations. 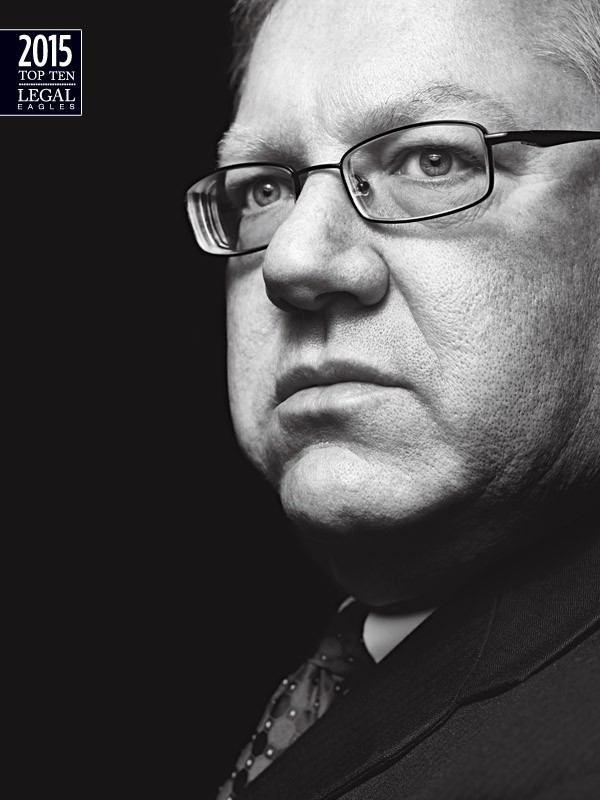 In a recent case before the Nassau County Supreme Court, Manzione successfully defended a surgeon against a patient who claimed Manzione’s client failed to provide swift and proper medical attention. Manzione’s concise representation of his client led to the jury ruling in his favor.

After earning his juris doctor degree from St. John’s University School of Law in 1987, Manzione joined Furey & Furey, P.C. and has been a partner since 1995. He is a member of the Trial LawyersAssociation of Nassau and Suffolk Counties and he has lectured to physicians about risk reduction strategies pertaining to patient care. 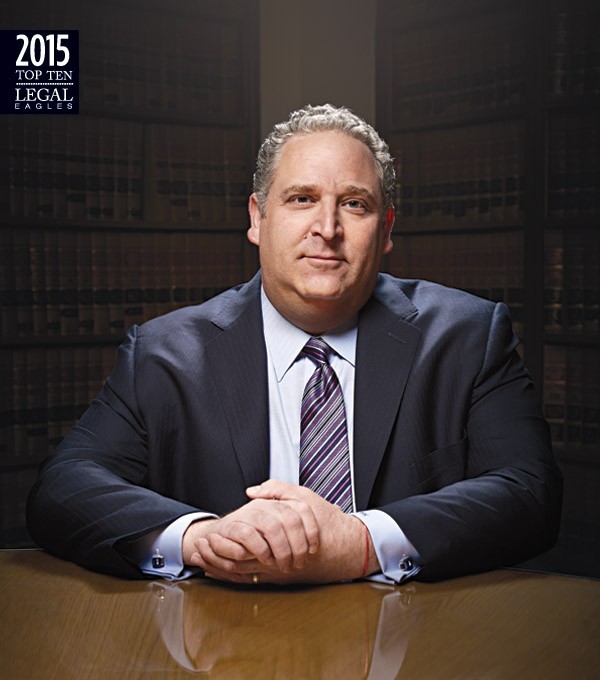 Lawrence P. Krasin, Senior Partner
Edelman, Krasin & Jaye
Personal Injury
Plaintiffs’ personal injury and medical malpractice litigation are just a few of the areas Lawrence Krasin focuses on when representing clients. His experience in property management, rentals and maintenance rounds out his repertoire. Krasin has served his community as a board member of the Crohn’s and Colitis Foundation of America and Walk the Walk, an organization dedicated to fighting elder abuse.

Among his proudest moments is a case many other firms rejected. Krasin successfully represented a 26-year-old electrician against B&G Electrical Contractors. The client was injured while assisting B&G Building Services with work at a Home Depot store and Krasin brought suit against Home Depot and B&G Building Services under labor law and industrial codes. The case was complicated by Home Depot bringing third party actions against both B&G companies for contractual indemnification. After six years of treatments and surgeries, the Workers Compensation Board found Krasin’s client to be permanently disabled. Finally, in the seventh year of the case, Krasin was able to secure a settlement for his client valued at more than $10 million. 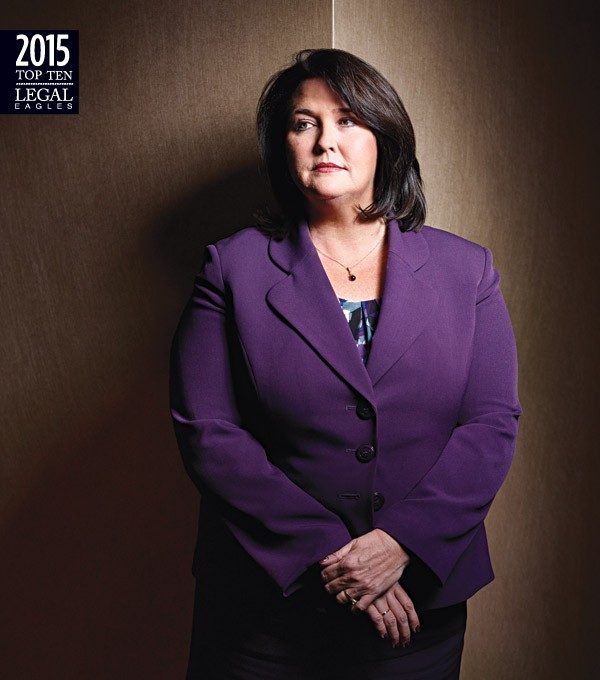 Kathleen Deegan Dickson, Partner
Forchelli, Curto, Deegan, Schwartz, Mineo & Terrana, LLP
Real Estate
The mark of a good attorney is eff ectiveness outside the courtroom, as well as when a hearing begins. Kathleen Deegan Dickson claims success representing clients in real restate, particularly land use and zoning law, because of her positive coordination of the various parties on the development landscape.

Her most gratifying success was representing SCO Family of Services. The nonprofit wanted to open a residential school for autistic children at the vacant convent of St. Brigid’s parish in the Village of Westbury. Residents began vehemently campaigning against the school. Deegan Dickson worked hard to recruit supporters to attend the public zoning board hearing. When she arrived the night of the hearing, she saw what she thought were huge crowds there to counter the proposal. But, the throngs were actually out in support of Westbrook Prep. Her work connecting with supporters drowned out the overwhelming opposition and the zoning board approved the application. 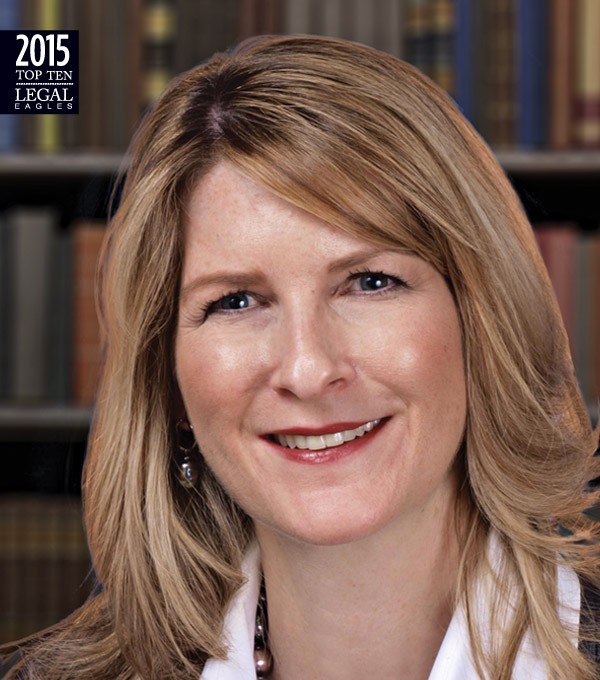 In fact her “death before determination” case changed the way some Medicaid determinations are rendered. Cona’s 94-year-old client was legally blind, deaf and suffered from diabetes and other medical conditions. He applied for Medicaid when he could no longer fund a home health aide himself, but the review process took so long the man died before benefits were approved. Cona showed his care plan and daily services were a de facto nursing assessment in accordance with state regulations. The tribunal ruled in Cona’s favor, accepting the evidence to establish the amount of care that should have been authorized. The subsequent Medicaid payout absolved the client’s estate from the liability of tens of thousands of dollars.

Cona serves on the Board of Trustees of the Long Island Alzheimer’s Foundation and has been featured in many internationally recognized newspapers and publications. She is a frequent author and lecturer and has appeared as a guest on WNBC-TV, WABC-TV, CNN and News12 LI, to name a few.