Being on a diet in America is akin to choosing an option at a restaurant. There’s Atkins and South Beach for meat lovers, the trusty vegetarian lifestyle for those who like a carb every so often and fl exitarian for those who can’t decide. There are also a slew of celebrities endorsing commercial diet giants like Weight Watchers (Jennifer Hudson), Jenny Craig (Kirstie Alley) and Nutrisystem (Marie Osmond). With all this choice, it’s no surprise that Americans spend $60 billion annually to shed the pounds, according to market research firm Marketdata Enterprises.

It appears, however, that the diet industry’s flash and flair just can’t compete with gimmick-free simplicity; for the fifth consecutive year, U.S. News & World Report named the humble DASH Diet the year’s best overall. Unlike the other 34 diets ranked, including the third-place Mayo Clinic diet and last place’s paleo diet, DASH— Dietary Approaches to Stop Hypertension—is not a diet designed to shed pounds. It was developed by the National Heart Lung and Blood Institute in the mid-1990s to fight high blood pressure, and considers weight loss an extra benefit. “It’s not really a diet in the sense of, ‘I’ll do this for a few months and then move on,’” said Joseph Diamond, director of nuclear cardiology at Long Island Jewish Medical Center and a fellow at the American Society of Hypertension. “It’s a lifestyle modification.”

For 43-year-old Holtsville resident Christine Livingston, DASH sounded like an improvement over her previous “diet” of fast food and snacking over the sink. “You’re eating fresh fruits and vegetables, low fat, you can still have dairy,” she said. “It’s a healthier way to eat—a better lifestyle.” And while Livingston’s 13-year-old son isn’t a fan of veggies quite yet, she said her whole family has benefited from the change. It helped her stabilize her fluctuating blood pressure, reducing her risk of serious health problems and she’s lost about 15 pounds in the 8 years she’s been on the diet. Since adopting DASH, meals in the Livingston home have consisted of mostly organic foods, fish, lean meats and poultry, fresh salads, vegetables, homemade sauces, whole-grain pastas along with low-fat or fat-free dairy, beans, nuts and seeds. Those waiting for the razzle-dazzle might be shocked at the simple, sound approach DASH takes. The focus is on reducing blood pressure and the risk of hypertension. Proponents are encouraged to limit salt intake to 2,300mg per day, about one teaspoon (or 1,500mg for those with diabetes or chronic kidney disease), and to cut back on red meat, sweets, sugary drinks and alcohol. The diet stays within the government’s recommended percentages of daily calories from total fat, protein and carbs, but aims to keep the saturated fat well below the benchmark 10 percent.

An added bonus of the diet, according to Diamond, is that it’s not inherently expensive if dieters make smarter choices—like buying seasonal local fruits and vegetables versus those imported out of season, or local bluefish instead of wild Alaskan salmon. “Even in the fast food world there are now more options in the salad bars,” Diamond said. “It requires some education on how to read food labels.”

Another DASH benefit: it’s not restrictive in the way most diets can be, according to Jennifer Fitzgibbon, a registered oncology dietician at the Stony Brook Cancer Center. While people should remain aware of portions and serving sizes, there’s really no limit on food groups. On diets like Atkins, which Livingston did for nearly a decade before former colleague Fitzgibbon turned her onto DASH, dieters must all but abstain from carbohydrates (no more than 20 grams per day) and focus mainly on proteins and fats. “You can’t live on that,” Livingston said. “It’s so restrictive and that’s not a lifestyle change.” Although she did experience some minor restriction when first adopting DASH, Livingston found it to be sustainable.

“It’s a win-win,” Fitzgibbon said. “You reduce blood pressure and lower your weight,” which reduces risk factors for diabetes, cancer and other diseases. DASH also encourages clean eating, meaning organic food that has not been genetically modified or doused with pesticides. That’s an important aspect for Fitzgibbon, who works with cancer patients and has read up on the possible links between pesticide chemicals and cancer. “The jury’s still out,” she said, “but I think we should be conscious of the pesticide content in our food.” 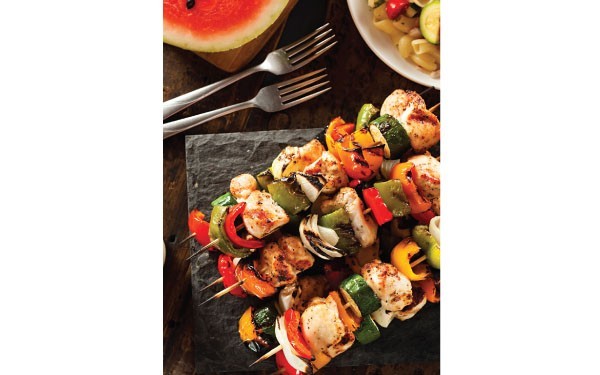 While people should remain aware of portions and serving sizes, there’s really no limit on food groups.

Both Fitzgibbon and Diamond find DASH to be especially useful for prevention: high-fiber, plant-based diets are essential to reducing cancer risk factors, and potassium, magnesium, calcium and foods rich in antioxidants hamper heart disease and stroke, two of the leading causes of death for Americans. The diet focuses on increasing fiber, potassium, calcium, vitamins B12 and D, which were labeled as “nutrients of concern” in the 2010 dietary guidelines published by the Departments of Agriculture and Health and Human Services.

Obesity is still rampant throughout have high blood pressure. Of those 67 million people, fewer than half have the issue under control, which increases the risk for heart disease and stroke, according to the Centers for Disease Control and Prevention. “We’re doing better now than 10 years ago. Education is getting better, but we’re not there yet,” Diamond said, adding that he’s seen an increase in the number of patients with hypertension asking how to utilize lifestyle changes instead of medicine.

In the initial DASH studies, researchers found that the systolic blood pressure in participants with hypertension dropped up to 11 points within a few days of starting the diet. Those with borderline blood pressure saw drops of up to 3.5 points, which Diamond considers significant.

Despite its success and more than 10 years in practice, DASH never became a household name. With a focus on managing high blood pressure, not weight loss, DASH doesn’t have media appeal, Diamond said. In fact, the diet helps lower blood pressure without requiring any weight loss at all. “With these other popular ‘food exclusion’ diets, people follow them usually with the primary intention to lose weight,” Fitzgibbon said, but DASH has a more clinical reputation.

Since snagging the top spot on the best diets list, DASH has garnered some attention. It made headlines globally and became the subject of a number of books, including a cookbook and part of the For Dummies series. But it really is simple, according to Livingston. “You just have to be conscious of what you’re eating and you’ll get accustomed to it,” she said. “Nothing fancy.”