When East Rockaway designer Keith Mazzei was asked to revamp this home’s interior, the formal dining room was the last space touched. The family had recently moved in and other rooms were more pressing. When the time came to convert the space into a relaxed, casual room for family entertaining, it had nothing in it, which most designers agree is a big benefit. But that doesn’t mean it was easy. “This room isn’t enormous, it’s about twenty-six by forty feet,” Mazzei said. “The clients wanted a place to gather and watch TV, but also a fireplace, a bar and a pool table. The biggest challenge was making it comfortable for everybody, the adults and the kids.” Compounding the situation was that the 1950s Georgian colonial in Locust Valley already had a den, meaning this room had to feel different albeit cohesive with the rest of the home’s interior.

Mazzei tried five or six different floor plans before settling on one that placed the TV on one wall surrounded by a seating area. The other elements— the pool table, bar and fireplace—were grouped into another entertaining zone. The split gives the room a natural separation when both adults and children use it. Mazzei incorporated transitional style furnishings—a spherical chandelier, chairs, benches, a bar table and ottomans—that retain some of the traditional look of the rest of the home, but with more contemporary lines.

Save for the fireplace’s location, which was existing, all the structure is new, including the permanent bar, the first thing Mazzei addressed. The client requested it and Mazzei delivered with a custom built bar that has an old school, New York City look and feel, complete with mirrored back and glass shelves. “Most men want bars that are very accessible and they want to see everything, they don’t want stuff hidden behind doors,” said Mazzei. The same Long Island based craftsman built the new fireplace mantel in a dark wood with ornate carvings. Flanking the bar are tall seats for guests and a pair of wingback chairs for larger gatherings, or for players waiting their turn during a game. 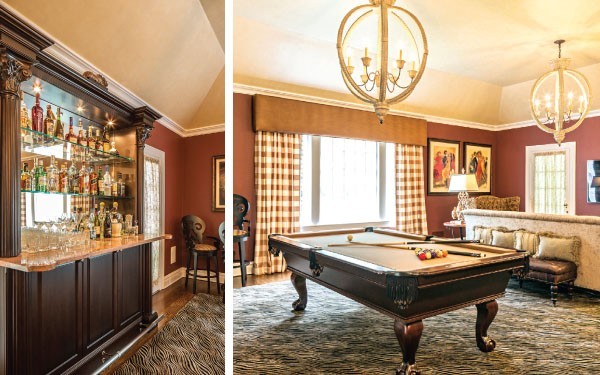 The rich stained wood used in the pool table and seating is decidedly masculine, reinforced by the gingham curtains.

The pool table visually dominates the room because of its size and the clearance required around it. It mimics the bar’s masculine feel with squat feet in dark wood. Typically, a fireplace is the focal point of most designs. Here, it plays a secondary note to the pool table and other furniture. “I did a lot of furniture that was moveable, like chairs, little stools and ottomans and if they wanted to cuddle up next to the fireplace that’s easy to do,” Mazzei said. “And by not having seating around the fireplace all the time, it makes the space less formal.”

Walls are painted in a color that plays a subtle backdrop to the room’s artwork. Because the rest of the home doesn’t shy away from color, Mazzei didn’t want these walls to be neutral, but he didn’t pick a vibrant color either. The room’s largest window is topped with a leather valance, the only animal skin in the room—a conscious decision considering the extensive use of the material in the nearby den. Underneath is a gingham check pattern on the drapes, a continuation of the theme started in the bar area.