Opening the door to Gyrotonic Manhasset’s downstairs studio reveals a bit of a bewildering display: an array of exercise machines that look like a cross between Pilates towers and high-end yacht furniture. Among them is the Gyrotonic Pulley Tower, with all sorts of straps and attachments; the Archway, which looks like grown-up monkey bars and the Jumping Stretching Board—a hybrid between parallel bars, an elliptical machine and a people mover. There are no barbells, treadmills or elliptical machines here, but then again, this is a different sort of workout.

“I used to try to explain to people what Gyrotonic is all about,” said Marni Larkin, a physical therapist and owner of the 4-year-old studio. Now she encourages the curious to try out the yoga and dance- inspired workout. “It’s three- dimensional and based on a sophisticated understanding of the human body. It shows you what it’s like to feel your best posturally.” The benefits of the workout range from less stress on joints because of the pulleys, something older athletes appreciate, to better coordination between major muscle groups, which benefits everyone from dancers to lacrosse players.

In the 1980s former ballet dancer Juliu Horvath started Gyrokinesis (Gyro for short), a mat and stool- based workout of gentle, rhythmic sequences with movements similar to those found in yoga, dance, gymnastics and tai chi. The Gyrotonic machines, made from gleaming metal, glossy plywood and leather, make it easier to complete the biomechanically challenging movements. “The floor work, to the uninitiated, can be hard,” Larkin said. “The machines are more fun. I can guide people better because I have equipment that helps me either support them or allow them to resist.” Classes tend to incorporate both floor work and time on the machines.

Larkin said Gyro’s rhythmic, circular motions can seem underwhelming at first if proper form and positioning are ignored. “It’s more like a martial art in that first you learn a basic movement,” she said. “There is an evolution of your understanding of each movement. You do the same motions but it’s the quality and the skill level that increases, which is developed over time.” 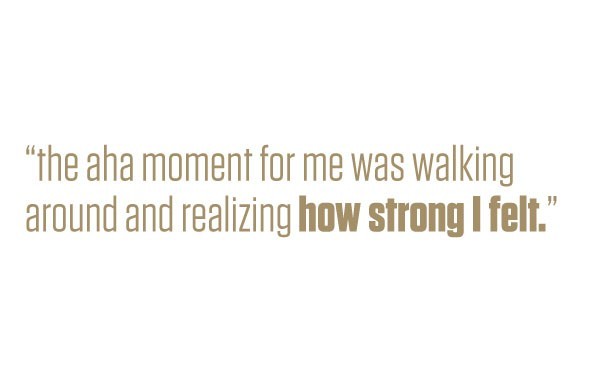 Each of the five Gyro pieces is customizable to the athletes’ shape and all can be used to perform several kinds of movements. A typical move on the Pulley Tower involves straddling the bench, grabbing hold of two knobs and making circular movements with hands, arms and shoulders while rotating at the waist. The Gyrotoner, which looks like a stationary bike with rotating arm wheels, allows users to sit below the seat and thrust forward while rotating the arms away, almost like a breaststroke, or rest on the seat, strap their feet in and rotate them towards or away from each other. Athletes hang down from the parallel bars on the Jumping Stretching Board while moving each foot independently on the rails.

One middle-aged female regular comes a few times a week to augment her tennis. She said Gyrotonic felt like “working the body from the inside out.” Stacey, another female regular from Port Washington, credits eight months of the workout for doing more for her body than a decade of Pilates and yoga. She’s seen an increase in muscle tone, especially in her back and core, a longer, leaner feel and better posture and movement. “It takes a while to understand the benefits, but the aha moment for me was walking around and realizing how strong I felt.”

Unlike a Pilates reformer tower, which adds resistance, the Gyro equipment can be used to remove resistance from limbs, increase range of motion and allow users to focus on core muscles, lengthening and expanding the body. “I think it’s much more biomechanically sophisticated than yoga or Pilates,” Larkin said. “In Pilates you hold your spine still and with yoga, while there are a lot of different forms, some- times the movements don’t matter while other forms are super specific.” Because Gyro constantly moves the spine the benefits are applicable to any sport or form of exercise. “It’s training you to move in the best possible way in any situation.” Gyro is gentle enough for seniors but challenging enough for seasoned athletes in a sort of mental, mind-body rewiring way. But retraining the brain and body and getting away from negative patterns of movements—like hunching over the computer—can be a slow process, and takes repetition and patience.