Most designs place heavy emphasis on wall space—and rightfully so, it’s a vast expanse of canvas at eye level. The ceiling however, is rarely conversation-worthy outside of some basic crown molding and an uninspired smattering of white paint. But when viewed with a fresh perspective, that swath of drywall overhead can become the focal point of the room. Generally any treatment fit for a wall can be applied to a ceiling. And because scuff marks and crayon scribble aren’t a concern, the need for washability isn’t (usually) as high a priority; the surface actually lends itself to a greater number of finishing options. Those enhancements range from easy, DIY projects like a bold new paint color to designs that add architecture, like the crisp lines of a coffered ceiling. Designers use five different aesthetic ceiling treatments to make the fifth wall shine, but the most inspired result typically involves combining a few. 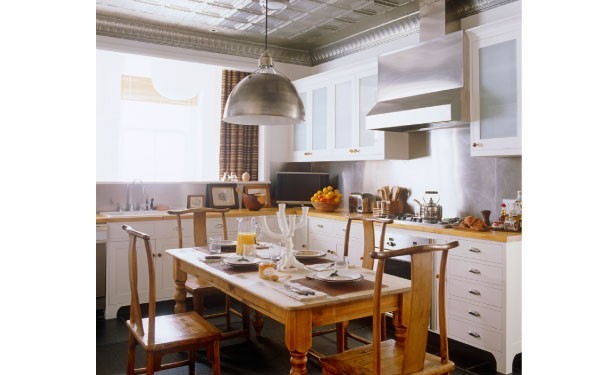 Everyone wants high ceilings because they add interest, light and visual volume. But changing the structure of a roof system requires construction to actually raise the plane to create a vault, barrel shape or tray ceiling. Another way to alter the room’s profile without the time, expense or mess of a major framing renovation is by adding a coffered ceiling—moldings applied to the existing surface, forming a grid pattern. “To do this, at least three different moldings must be used together to build the squares so that they are finished on all sides,” said remodeling contractor Steve Fuller, president of Island Park’s Fuller and Company.

Another requirement: the room should have ceilings at least eight feet high. With ornate, stain-grade molding this is a traditional approach to room décor—think English library—but “a more contemporary look can be achieved by using smooth, flat moldings,” added Fuller, referring to painted whiteboards. The center of the framed-out area can then be painted, wallpapered or finished with an applied texture. Adding faux ceiling beams is a new trend used to infuse the space with a casual, relaxed vibe. “The character and warmth of reclaimed wood is ideal but new wood can be distressed or weathered to attain an older look, or glazed so the cracks, grooves and other variations appear darker,” said Fuller.

When budget or existing conditions won’t accommodate a coffered ceiling some simple carpentry can do the trick. “Smaller moldings can be applied to flat ceilings in a configuration that either outlines the dimension of the room or centers around a lighting fixture,” said Fuller. The quickest fix of all is to nail or glue up a pre-formed medallion before installing a chandelier then painting the molding in either the same glossy color as the rest of the trim or in an interesting, unexpected hue. This sets off a ceiling by adding a bit of detail along with a contrast in color and paint finishes. 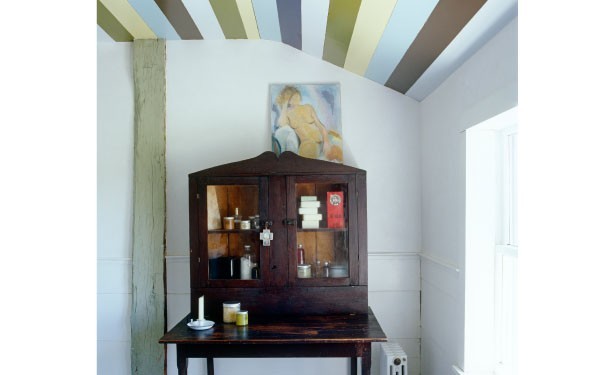 No other treatment can change a ceiling’s look the way an artistic paint job can.

Permanently applied to the drywall, these renderings and faux finishes can make a low ceiling feel higher, a tall one seem lower and cozier or trick the eye with a three-dimensional look. This approach can mimic nearly anything from the timeworn feel of limestone to impersonating the weather with dreamy clouds or organic branches and climbing vines.

Decorative painter Rachel Meslin of West Babylon layers on different techniques to create one-of-a-kind surfaces, ranging from florals in a dining room to the solar system in a kid’s bedroom. “Designing the ceiling is a great way to add warmth and coziness to a home that has very high ones or to bring an air of drama to a room in general” said Meslin. “If there is a great deal of wall space, you don’t also want a big, plain ceiling, so it’s a good area to fill with color, texture or the illusion of something.” In a Syosset home, she gave the dining room a Moroccan feel with a red paint base coat followed by a red glaze, some intricate stenciling and brass studding. 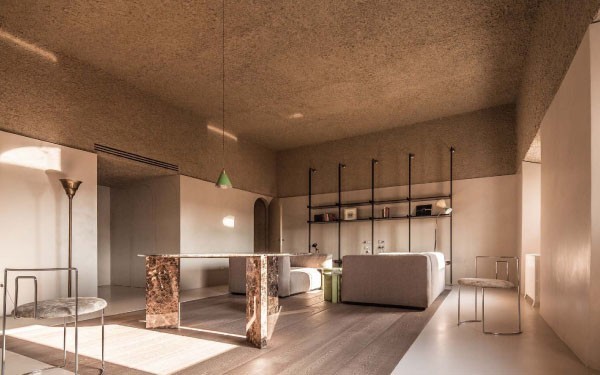 The white, cake-icing stucco of decades past (and its cousin, the popcorn ceiling) have been replaced with more refined surfacing techniques like Luster Stone, Shimmer Stone and Marbelux. These specialty plasters contain limestone and marble dust that lend a masonry feel to ordinary drywall. “They get trowelled on and then sanded to a desired texture to reveal a suede-like finish with shiny flecks throughout,” said Meslin. A tint is added to the plaster before and a paint technique is used after application to give the surface depth and a multitude of tones. “A room’s lighting is also key in making the most of these reflective materials,” added Meslin.

Nina Bock, president of Ethereal Designs and Interiors in Plainview, used a Luster Stone product called Faux Effects in the cool Frosted Denim color on the ceiling of a dining room in Westbury. She complemented the bluish-gray base with rich gold stenciling, then incorporated the family monogram. “It’s a decorative, architectural coating that reads like a natural reflective stone. They can be used alone or in combination with other materials like sandstone, Venetian plaster or fauxtex (a latex alternative) to produce a wide assortment of subtle and dramatic finishes,” said Bock. 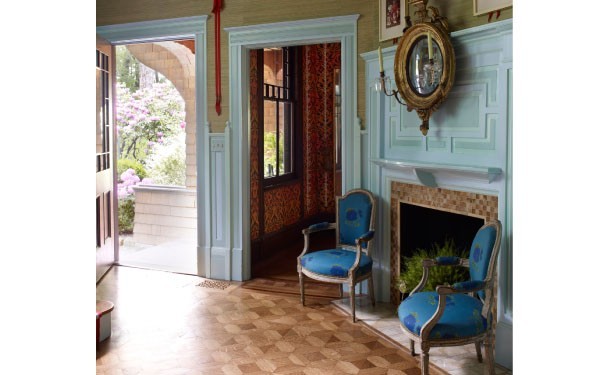 Many designers feel a white ceiling is a wasted opportunity to draw the plane into the décor. “I never use white,” said Rebecca Goodman, owner of Lola Tucker Interiors in Sea Cliff. “Bringing color to the ceiling adds the element of surprise and is also an interesting way to unify the rest of the room.” For a solid-colored ceiling Goodman opts for the same hue as the wall, but in a deeper shade, bridging the gap between the two with crisp molding painted glossy white. She prefers walls and ceilings to have a degree of gloss to them, capitalizing on the light in the room, but a flat finish up top introduces an interesting contrast against eggshell on walls or high gloss on trim. A more involved way to achieve that texture is with decorative paint products that finish the ceiling in metallic, faux leather or suede or a crackled, weathered look.

When it comes to adding texture or refined patterns wallpaper can’t be beat. To maximize the impact overhead, Goodman often combines a strong pattern with a bold wall paint below. “I prefer to put a wall covering on the ceiling over picking one wall in the room to feature,” she said. “By wallpapering your ceiling, it introduces the pattern into the room without limiting the space to one particular furniture layout.”

Depending on the room and style of the home, the ceiling can take on virtually any mood—from whimsical to supporting a themed design to classic or modern geometric patterns. A wall covering with metallic accents, different from the foil papers of the 1970s, catches the glimmer of the chandelier and gives that space a bit of sparkle. Even in a room where a bold, punchy paper isn’t the right fit, a softer choice with subdued texture works because the right lighting will showcase even the softest pattern. Grass cloth is an example that can go from a barely there texture in an earth tone to a deeply stamped look in a bold color. Embossed vinyl coverings often have a scroll or fl oral design, or are sculpted with a modern, cubist pattern. Once a wall covering is decided upon, Goodman said she “then lets the ceiling design dictate what will be done with the walls.”