“Pictures are one dollar!” said a powerfully New York-accented voice from behind a curtain of hanging salamis and dry mozzarellas. I lowered my camera to grin at the man hazing me, which allowed him to see my Yankees cap. “Oh! A Yankee fan? Ok, this one’s on the house.”

The man in my viewfinder was Peter Capuano who works at Mike’s Deli in the Arthur Avenue Market, the Bronx. I carefully took a few steps backwards to stand between barrels of salt cured capers and brining olives and shot a few more frames. The compact Capuano ducked away for an instant then reappeared holding a cluster of apricot-sized dry cheeses on strings.

“Let me show you a trick,” he said, producing a long slicing knife from behind the counter and impaling a cheese. “Remember going camping as a kid…?” Capuano turned to a stove and a burner flickered to life. He held the little cheese directly in the flame for half a minute, rotating the knife for even toasting, then quartered the treat and passed the charred, oozy hunks across the counter. “Italian marshmallows!” he announced. “Mangia!”

Like everyone who isn’t from the Bronx, my ideas about the borough were formed onscreen. Films shot in the Bronx almost exclusively use the area as Hollywood code for “tough neighborhood”—the way eye patches and white lap cats indicate crime bosses. Films like A Bronx Tale and Rumble in the Bronx focus on how incurably gritty the area is. In 1979’s The Warriors, when all the gangs in New York meet for a caucus, the only logical locale is the Bronx.

I hate to admit it, but even having been born in Manhattan my visits to the Bronx have been largely confined to the big three: Yankee Stadium, the zoo and the botanical gardens next door. In fact, until I made a conscious effort to explore the borough I pictured the Bronx as a kind of giant, 1980s D train covered in graffiti and patrolled by garishly attired breakdancing crews with switchblades.

What I found when I made a conscious effort to investigate, is that it’s a prideful community filled with interesting enclaves, attractions worth exploring and genuinely friendly and welcoming people. 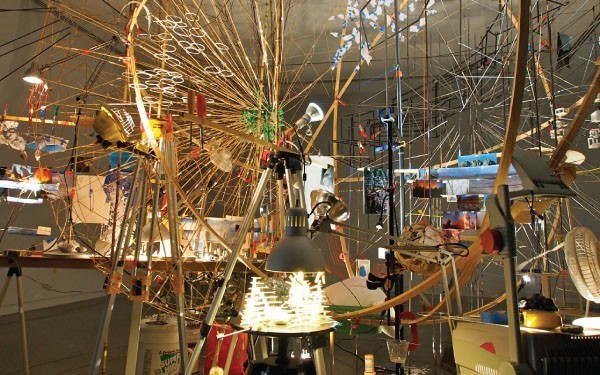 A GRAND BEGINNING
I began my tour at Grand Concourse and 165th: The Bronx Museum of the Arts. Admission to this manageable museum is free and the collection comprises Bronx-based permanent exhibits, guest artists and a rich events calendar. (The museum doesn’t open until 11am, try lingering over brunch down the street at hipster hotspot Giovanni’s at 150th.) During my visit I viewed Sarah Sze’s ambitious “Triple Point (Planetarium)”—a veritable cosmos of found objects including screwdrivers, desk lamps, building toys and even a precariously suspended dandelion.

Leaving the museum I strolled south along the Bronx Walk of Fame—a collection of lamppost signs celebrating homegrown celebs like Ace Frehley of KISS, Grandmaster Flash & Furious Five, Colin Powell, Regis Philbin, DJ Red Alert and more. The walk took me past Babe Ruth Plaza where I paused to look downhill at Yankee Stadium before continuing to Sam’s Soul food on 150th.

This welcoming Southern kitchen is as much an attraction as an eatery and offers authentic soul food including oxtails, ribs, baked ham, fried fish and a variety of meats that have been “smothered.” (The hot ticket items sell out quickly, the hostess cautioned, and advised an early dinnertime.) I enjoyed a heap of braised turkey wings with greens and hot cornbread and also learned that Sam’s hosts karaoke events every Saturday in its lounge. I was not able to attend a karaoke night, but I’d be very surprised if the event didn’t qualify as “bangin’.”

GREENER PASTURES
I wrapped up my Concourse explorations after lunch and headed for the greener pastures of Pelham Park. Verdant expanses are certainly not among the first things one imagines when picturing the Bronx, but at three times the size of Central Park, Pelham has a lot of green going for it. A 13-mile saltwater shoreline hugs the Long Island Sound within the park’s confines and is enjoyed by beachgoers, fishermen and canoeing and kayaking enthusiasts. Summer stage events are frequent here and there are two golf courses within the park as well as miles of bridle trails and the historic Bartow-Pell Mansion Museum.

I was accompanied on my tour by a birder from Washington State and we enjoyed spotting osprey nests throughout the area. (My friend also taught me that our local great black backed seagulls are the world’s largest gulls—which may explain why they’ve taken so adeptly to mugging children for hot dogs and ice cream cones.) Pelham Park, we jointly learned, is home to one of New York’s largest flocks of wild turkeys; among the collective nouns we called up on an iPhone for these birds were the terms: rafter, raffle, gobble, gang and posse. (The latter two seemed especially apt for Bronx-based turkeys.) 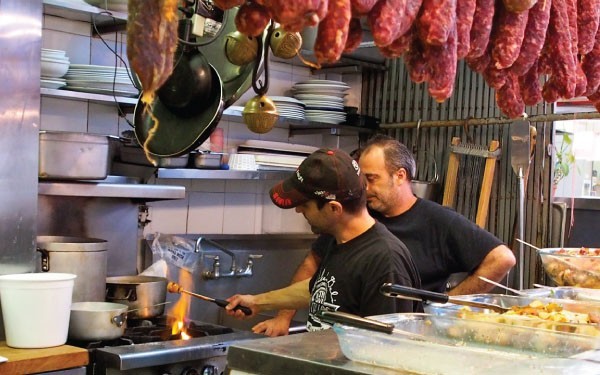 ELECTRIC AVENUE
Two days’ leisure time in the Bronx is easy to fill. In fact, 48 hours may not feel like enough. Just because one is attempting to uncover an area’s hidden secrets does not mean one should ignore the established landmarks. Yankee Stadium, the Bronx Zoo and the New York Botanical Garden are all treasures that merit at least a morning or an evening’s attention. So too do the shrimp boxes and crab shacks of City Island, the Soviet era lithography exhibit at the Hebrew Home, the Edgar Allen Poe Cottage and Gun Hill Brewing—the only Bronx brewery currently producing its beer on-site.

My last discovery on this trip to the Bronx however, was the infinitely explore-able string of restaurants and pork stores along Arthur Avenue. Widely referred to as New York’s “real Little Italy,” Arthur Avenue certainly has a charm and accessibility that Manhattan’s ever-shrinking stretch of streets has lost. Clam and oyster carts sit outside of fish shops and communal bottles of hot sauce and vinegar sit in pools of melting crushed ice. Butchers’ windows along the avenue offer animals and parts of animals you can’t find in more tourist-friendly locales: “Wild Boar, Venison, Pheasants, Rabbits, Foie Gras, Quails, Poussin,” one shop window advertised.

Up the street from this purveyor of throwback meats, past Madonia Bros. Bakery but not as far as the Albanian cafes near 186th, is the Arthur Avenue Market. Busy, colorful and more exotic than a New York market has any right to be, this cluster of emporia is a self-contained world. A three-man cigar rolling operation caters to the folded-newspaper-under-the-arm crowd up front, while a florist, a bar, a fishmonger, a grocer and several drygoods stalls spread out within.

Past the communal dining tables that anchor the center of the market I encountered Peter Capuano. After his engagingly salty quip about charging non-Yankee fans for photos, Capuano grinned readily and happily shared his inside tip about fire-roasting dry mozzarella. He didn’t know that I was a journalist on assignment in the Bronx. He didn’t know I was attempting to defuse my prejudices about the borough. All Capuano knew was that I was a big guy who’d probably enjoy a toasty, cheesy Italian marshmallow. He was right.

WHERE TO STAY
The Opera House Hotel
An early 1900s opera house that staged shows by all-time greats like Harry Houdini and the Marx Brothers, this elegant hotel offers a boutique experience in the heart of the South Bronx. operahousehotel.com

The Andrew Freedman Complex
This landmarked complex on Grand Concourse was originally the home of financier and New York Giants baseball team owner Andrew Freedman. Today the 1920s structure houses a senior center, a gallery for local artists and 10 rental rooms that are part of a hospitality industry teaching initiative. andrewfreedmancomplex.com