Jacob deGrom didn’t throw a Major League pitch until the middle of last May when he was called up from Triple-A Las Vegas to fill a bullpen role for the Mets. Two days after his arrival deGrom was thrust into the starting rotation when Dillon Gee landed on the disabled list. DeGrom embarked on an incredible journey by shutting down the Yankees at Citi Field to the tune of one run over seven innings—even retiring Derek Jeter four times. The former college shortstop with flowing brown locks, a mid- 90s fastball and a wicked slider also made an impact at the dish, whacking a single in his first-ever plate appearance to end a record drought by Mets pitchers (0-for-64) to start the season.

The hits eventually kept coming for the 26-year-old right-hander, after the seven outings he needed to record his first big league victory. By early July he found a rhythm and began a stretch of wins in five consecutive starts, including an 11-strikeout, no-walk performance over seven shutout innings against the Atlanta Braves.

It’s widely believed deGrom, drafted by the Mets in the ninth round in 2010 out of Stetson University in DeLand, FL, overtook Cincinnati Reds outfielder Billy Hamilton in the National League Rookie of the Year race Sept 15 when he tied the modern-day record for strikeouts to start a game by whiffing eight Florida Marlins. He was lights-out down the stretch and finished 9-6 with a 2.69 ERA and 144 strikeouts.

DeGrom’s storybook 2014 reached a pinnacle in November when in a span of 48 hours he got married and was named the fifth ROY in franchise history. Pulse caught up with deGrom a few days before Mets pitchers and catchers reported for spring training in Port St. Lucie, FL.

Long Island Pulse: You are not the first young Mets pitcher to perform better in the majors when called up. Is there anything specific you can attribute this to?
Jacob deGrom: I got a lot of confidence from the first Yankee start. Even though I didn’t win a lot in the beginning, I had some good results and early on I knew I could pitch in the majors. It is better I came up when no one really noticed me, I was able to slip under the radar for a while.

What was it like facing Derek Jeter in your debut?
It was a big thrill to face a future Hall of Famer. When I saw him in the batter’s box, it was kind of hard to believe I was pitching in a major league game.

You struggled a bit after a quick start before turning it on. Was there any specific moment where you felt everything just clicked?
Things did not go well in the beginning, but I never lost confidence. Terry [Collins] kept running me out there every fifth day and our catchers—Travis d’Arnaud and Anthony Recker kept telling me “don’t get down, things will change,” and they did.

Mets pitchers were in a hitting slump last season until you came through in your debut plate appearance. How did it feel to get your first MLB hit?
It was a great feeling. Don’t forget I’m a former shortstop and I take pride in swinging the bat. 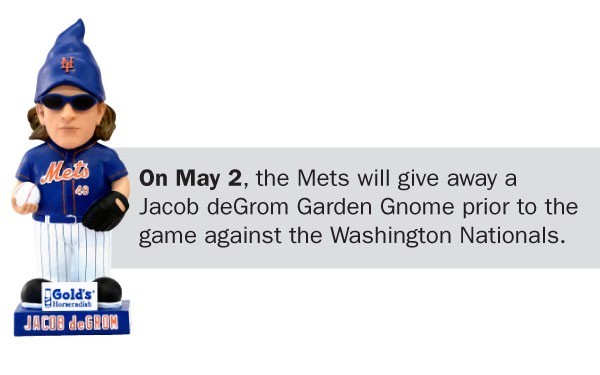 Did you keep the ball from your first hit?
I did keep the ball and gave it to my father [Tony]. A ball from my first MLB victory [June 21 at Florida] is in my house in Florida.

Where’s the ROY award displayed?
The Mets asked me to donate my award to the Hall of Fame and I loaned it to them for a year. It’s an honor to have it there.

The Mets hadn’t had an ROY since Dwight Gooden in 1984. What was your reaction when you learned you won it?
I am really proud to be in that company with Gooden, Darryl Strawberry, Jon Matlack and Tom Seaver. It’s just a great thrill to have your name in the same company as those guys. It was a tremendous year for me and my family.

How did your time in Las Vegas help prepare you for the big leagues?
Frank Viola really helped me a lot on my location. It was great having a former Cy Young Award winner as my pitching coach.

Does the fact you’ve already had Tommy John surgery (in 2010) influence the way you approach your starts?
No it doesn’t. From my surgeries in the past, I am stronger now than I’ve ever been. I do not think about the surgery at all.

How’s Matt Harvey doing with his recovery from the surgery?
We talk a lot. I tell him where I was at certain stages. I try not to be too forward about it. When he asks me, I will tell him things. Some guys have setbacks when they start throwing again. I didn’t and Matt didn’t.

The numbers are pretty frightening: 75 percent of ROY winners (as of 2005) see a decline the following year. How will you avoid the sophomore slump?
For me, last year is in the past. I just want to worry about getting better. I still have a lot to improve on and that’s where I will concentrate this season. I need to work on my command and cut down on walks. I also have to learn how to go deeper in games.

What are your thoughts on the 2015 Mets?
I am excited about our team with Harvey coming back. David Wright will be healthy and a lot of our younger players like [Lucas] Duda and [Juan] Lagares and d’Arnaud will just keep getting better and better. I’m not worried about setting a figure for wins. We have a great sense of optimism in the clubhouse and I think we are ready to take that step to the next level.