Perched in the cliffs above Saundersfoot Harbor, where the dramatic Welsh tides left some ships leaning on damp sand, is the St. Brides Spa Hotel. My massage treatment had just ended; it was the first time that I had ever fallen asleep on the table, despite the great service. After just two days in Wales, I had already exhausted myself. A surf off the Gower peninsula, a hike to Dylan Thomas’ writing shed that looked upon Sir John’s Hill and a 15-mile bicycle ride along part of the country’s 870-mile coastal trail (Wales is the first nation to have a path covering the entire coastline), meant the treatment couldn’t have come at a better time.

I left my masseuse and tried to shake this enervation before dinner. I disrobed for a freezing therapeutic shower in the spa’s thermal suite, grabbed ice from a basin to rub across my face, and poured myself tea before slipping into the infinity pool. From the ledge, I watched the tide continue its retreat from the harbor. Beachgoers who probably set their blankets a few meters from the shoreline earlier in the day were now left half a soccer pitch from the sea.

Dinner at the hotel’s Cliff Restaurant was a sleepy affair. I waited for dark- ness to steal the views before giving myself permission to trudge off to bed.

In the morning I walked out onto the balcony outside of my marine- themed room and saw the return of the tide. The ships’ masts bobbed like stuttering hands on broken clocks flirting with their twelves. I could have spent days in the luxury of St. Brides, but I knew that I had to see the country. I stationed myself at a table at the Cliff and plotted out my Pembrokeshire County itinerary over a feast of eggs and haddock. 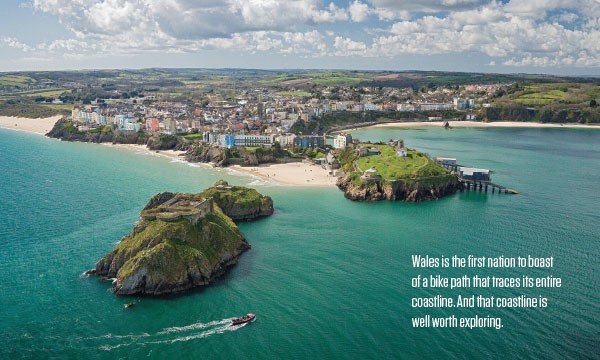 First on my list was the nearby seaside city  of Tenby. After arriving  in Tenby, I drove to one of the elevated roads above the shoreline. In the distance, across the hazy Bristol Channel, sat Caldey Island, home to the famous chocolatier monks, who also dabbled in baking shortbreads and handcrafting perfumes. I looked down at the pair of beaches and wondered how the city’s famous mathematician, Robert Recorde, could have conjured up the equal sign living by such inspiring, yet incongruous waterfronts. The head- land that ran from the town and toward the sea separated the beaches. To the north was one long stretch of sand while the southern beach had a small harbor with dozens of boats waiting for the tide to return.

Back in town, a similar disparity existed. Thirteenth-century medieval castellated walls neighbored the more modern Gregorian townhouses. I walked to High Street, where the cafes were setting up. The streets are closed to traffic around lunch time and as the locals grabbed tables, street performers filled the cobblestone paths and pushcart owners in the nose-piercing business waited for guests to feel daring in Wales.

I stumbled around and found a small lane called Quay Hill that offered a slice of sea view. I entered the Plantagenate Restaurant, famous for having the oldest and largest Flemish chimney inside a building, but decided that there wouldn’t be enough time to eat if I wanted to squeeze in a hike along the coastal trail.  I exited Tenby through one of the five archways of the city’s beloved barbican and drove up the coast to the smallest city in the United Kingdom, St. David.

The entire coastline is connected by a continuous path, but the most beautiful section of the trail is arguably in this region of Pembrokeshire. The trails near St. David offer hikers a pilgrimage in numerous forms.

The ethereal cliffs, rimmed and striped with bleached and tar-black lichen, bracketed the sea as a series of headlands. Plotted out on the page, the cliffs would have resembled musical scales. The cliff tops wore cloaks of fern and along the trail songbirds chased the sounds of crickets, butterflies danced upon flowers threaded into the bouquets of heather and Queen Anne’s lace, horses roamed, sheep paddocks bleated with life. In the royal blue waters at the base of each precipice, Atlantic gray seals periscoped their snouts from the sea before sunning atop boulders. They had come to the protected coves to pup. Nature was luxurious. And as I hiked I spotted only six white sailboats cruising the expanse of the Bristol Channel. 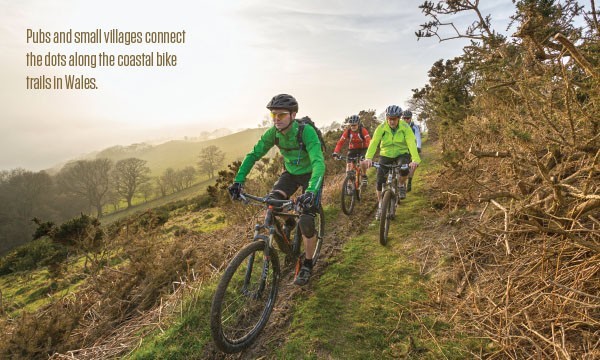 Journeys of a more theistic nature are possible in Wales as well. At White Sands Bay, to the north of St. David, a consecrated mound sits beside the car park where a church once stood. The church was built to honor a miracle that began at the bay. According to legend, pirates had abducted a Welsh boy named Patrick—better known as the Irish patron saint. In slavery, the boy performed his first miracle: converting his captors. To the south sits another destroyed holy site, the original St. Non’s Chapel, which was erected beside the spot where St. Non gave birth to St. David—who would become the patron saint of Wales. The story goes that a well sprung up at the place of this nativity, but today only the footprint of the church and an original Celtic cross decorate a field otherwise occupied by grazing cows.

I however, was on a less religious pilgrimage, heading down the path to Porthgain for a beer. I passed igneous tors that sat like black boils on the backs of green hills and cormorants fanning out their wings beside neon-rimmed tidal pools. I was in search of the Sloop Inn. While drinking a beer isn’t an uncommon way to end a grueling journey, it’s quite rare to find a pub along the path. But in Wales, where the entire coastline is home to both seaside communities and trail, I was able to plot out my voyage so that it would conclude with this luxury. At the Sloop, the beer was warm—in the way that the Welsh like their brews—and the interior designer was an eccentric. The inn looked  as though a tsunami had deposited the contents of a nautical museum in its rafters. Hanging above me was everything from glass buoys to award- winning giant crabs glued to plaques.

After slugging down one of the best beers of my life—albeit made all the more wonderful by the preceding slog—I looked at the time and decided there was room for one more pint. I took the back roads to a village in the Gwaun Valley.

Driving Welsh roads, which had been designed for single cars to traverse narrow lanes enveloped by sets of hedgerows, is both a cultural experience and a testa- ment to the people. Although motorists often face-off on these tight thoroughfares, no one beeps in frustration or in warning. Instead, in a lovely exercise in civility, drivers—sometimes six at a time—reverse to where the road widens to let one another pass. (And this in a nation where commutes are lengthened by sheep cross- ings and rams leaping suicidally from escarpments.) 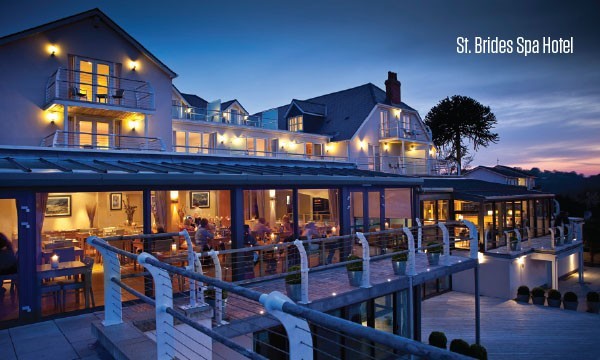 I reached the Gwaun Valley, where the people still ollow the Julian calendar, celebrating holidays like Christmas and New Year’s 13 days after the rest of the world. In the village of Pontfaen, I entered a small farmhouse pub called the Drffyn Arms, though everyone knows it as Bessie’s.

If the people of the Gwaun seem to be a fortnight behind, Bessie’s feels like it’s in the wrong century. Bessie, the elderly landlady, famous in these parts for her wit, sat in the misplaced church pew between the entrance and the bar. She moved her walker so that I could enter and make my way to a spot at the bar window, which resembled a bus terminal’s ticket booth more than a counter for the distribution of beer. I was served the only beer on tap, a warm Bass ale. While Bessie appeared too tired to shock the crowds with her endearing stories, she did allow a farmer to stage a cabbage auction for her clientele.

The next morning I returned to the beautiful precipices along the coast. But this time the plan wasn’t to walk the rim. The idea was to jump off. Coasteering is a nascent sport and Wales is its country of birth. Coasteering combines rock climbing, cliff jumping and extreme swimming. For adventurists looking for a crash-course (maybe that’s t he wrong word) in marine biology, it’s a must. I had expected it to be a day of non-stop adrenaline. But I paused with my guide to admire the sea anemones, grab at sand crabs and watch the grazing limpets of the tidal pools. But we always went back to hurling ourselves from 20-foot crags and swimming into caves where the swells would magnify.

The tide started to change, altering the depths that we required to plunge with safety, so we climbed back toward the van. My guide stopped to stretch, twisting his neck and rotating his shoulders. I watched the sun glimmer off the sea and the bluffs flow with fern. How wonderful it was to stand atop the cliffs of Pembrokeshire, lofted among its beauty, with odd pubs in close proximity. But I had paid the price of a thirsty athlete and Wales had done a number on me: my legs were sore from the hike, my arms weak from incorrectly scaling rock walls, my brain addled from pints. Maybe I should have postponed that massage and lavish stay until the end of my visit.