Gordon Korman cannot say exactly how many books he’s written. Sitting in a quiet sushi restaurant he guessed it was around 80. Yahoo! Answers sets the number at 83, but its unclear if that includes his newest, Masterminds, a trilogy that launched in February.

Whatever the actual number of books, it’s a lot, especially when you consider that Korman, who resides in Great Neck with his wife and children, is just 51. Of course the Toronto transplant did have a bit of a head start— he wrote his first book when he was 12 and it was published while he was a freshman in high school.

Korman has written about a wide variety of precocious youths in his career: a 12-year-old who turns out to be the world’s greatest natural hypnotist, a group of teen and tween shipwreck survivors and a whole middle school worth of aspiring athletes, science prodigies and budding business tycoons. But his inaugural effort, the 144-page boarding school comedy This Can’t Be Happening At Macdonald Hall, was rooted in Korman’s own reality.

“When I was in seventh grade the track coach had to teach English,” said Korman, an engaging speaker with a shaved head. “It was a staffing thing. They ran out of English teachers, but they had extra coaches, so we got the track coach. He was a good teacher, but he’d never taught English. He said we could work on whatever we wanted. It was more structured than that sounds—we gave him an outline the first week and then a chapter a week. My project became This Can’t Be Happening At Macdonald Hall.”

Korman, already a passionate reader, was loyal to writers like Judy Blume and Beverly Cleary in seventh grade. “I loved classic, old-school middle-grade novels—which weren’t old school when I was a kid. I think that’s why, when I was given so much time and freedom, I came up with a classic-format middle grade novel.”

Macdonald Hall tells the story of two irascible Canadian boarding school students named Bruno and Boots. It was published in 1978 by Scholastic—a company with which the 12-year-old Korman already had a professional relationship.

“I was the class monitor for Scholastic book orders,” said Korman who collected order sheets and payments and sent them to the publisher. He explained that as monitor, he considered himself essentially an employee of Scholastic, so when he finished his novel it was only natural he would give the company the right of first refusal. “I mailed my book to the address on the order sheets,” Korman said, laughing. “Being a seventh grader, two weeks later I’d forgotten all about it. But then we got this letter that was written in ‘maybe speak.’ It said, ‘We might, maybe, possibly, if the stars align, want to meet with you to talk about publishing what you’ve written.’” 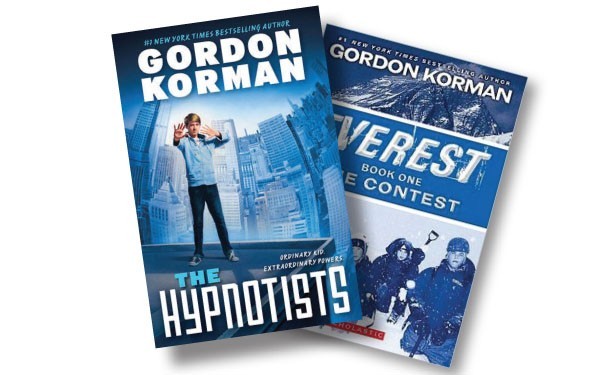 Korman wrote these and about 80 other books.

Korman is nonchalant about his precocious start. (His parents were wary at first, but after confirming that their son wasn’t being exploited, became his biggest fans.) Sipping green tea he explained that as a teenager he thought of authoring books as a summer job. Other kids would work as lifeguards or scoop ice cream and he would write books. His early efforts tended to revolve around likeable malcontents with exceptional talents: Rudy, an unhappy summer camper bent on escape, turns out to be a phenomenal, if reluctant, athlete in I Want To Go Home; Artie, 11, locked into a long road trip in No Coins Please, gradually emerges as an almost pathologically adept entrepreneur.

But while it’s easy to imagine that Korman, who published four books before graduating high school, might have seen himself as a wunderkind on the order of his protagonists, he said his actual experience was low key. “I wasn’t famous. I wasn’t making tons of money. Most of my friends thought it was kind of cool, but a lot of people probably thought I was the biggest nerd in the world. As I got into high school, the books became better known, and I was pretty marketable as ‘the teen author,’ but I didn’t actually take writing that seriously as a career. I always thought I’d do something else as a job and write on the side.”

Korman went to NYU to study film, but said it quickly became apparent he could establish a lasting career as a writer. During his time at college he fell in love with New York City and has lived here ever since.

“I loved the City,” Korman said, adding that he “put down roots” very quickly. However, after he moved to Long Island, he hasn’t really looked back. “I was living in Manhattan and my wife was a teacher in Great Neck, so she reverse commuted. But as soon as we started a family we moved to Long Island. I went from childless in Manhattan to living in Great Neck with a baby in, literally, a week and a half. It was an adjustment, but now I love this location.”

Korman currently spends his days writing, touring in support of youth literacy and shuttling his kids to various sporting events. He said that there’s barely a mile of Long Island he hasn’t traversed trying to find a field or a gym, and he added that watching each of his kids discover his writing is an amazing experience. “At one point or another, all three of my kids have been great fans,” Korman explained. “My fourth-grader is really into my work at the moment, and it’s been a blast to read the books together. It’s an awesome fringe benefit I never could have anticipated when I was first embarking on this career.”

When they’re not reading, the Korman clan enjoys exploring Long Island’s galaxy of cuisines. Their favorites are the SriPraPhai Thai restaurant in Mineola, Umberto’s Pizza in New Hyde Park and the ostrich offerings at Bareburger. The overall impression of Korman is one of contentedness. The majority of his books are still produced by his first publisher, Scholastic, and while some have taken aim at older teens—Born To Rock, Don’t Care High—the middle grades are where he’s most comfortable. Asked why he prefers to focus on this age group, Korman said he loves the loyalty middle school readers feel for their favorite authors. “Those years are where you’re first in charge of your own opinion. With the picture books you read just before that, it’s about the way your mom read to you, or the great voices she did. But beyond those years you start to pick what you like, and nobody can tell you what to do. Nothing’s ever as good as the books you read then.”

Pulse associate editor Chris Connolly loved Korman’s books so much as a boy he tried to emulate a Korman character who sold “attack jelly” on the streets of Manhattan. Connolly’s attack jelly sales were disappointing, but he did pursue a career in writing.