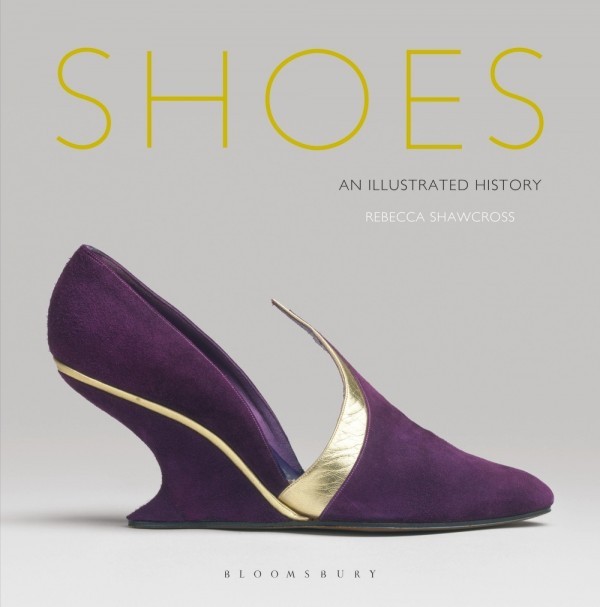 You couldn’t resist: last week, you bought a piece of art.

It’s not something you’ll ever hang on your wall. And though it might be tempting to put this art on show, a pedestal won’t be needed. No, you’ll display this art just below your ankles and, as you’ll see in Shoes: An Illustrated History by Rebecca Shawcross, you’ll be in good historical company.

While nobody knows who invented shoes, we know that they were worn on human feet at least 5,500 years ago. Shoes were simple then, made of animal hide and grasses which, said researchers wearing reproductions, were dry and cozy.

Very early shoes were often sandal-like and utilitarian, but footwear was also a sign of status for ancient Romans. That remained true throughout the Dark Ages and into medieval times, when shoemaking became a profession and extremely long, pointy-toed footwear was popular with the wealthy. Called “poulaines,” those shoes were nearly unwearable without a toe-to-waist cord to avoid tripping, frippery that working folk could ill-afford.

Disco-era super-high platform shoes had nothing on fifteenth-century chopines, which resembled small benches on which to walk. Henry VIII’s court loved the “footbag,” a shoe name that practically begs for revival. And during the Renaissance, even men wore fabulous shoes embellished with fist-sized roses.

Royalty, by the way, always left their footprint: though black was often a shoe color restricted to kings, Louis XIV laid claim to red as the color of royal footwear (Louboutin, anyone?). Charles II loved his buckles, and Louis XV’s mistress gave her name to heels. Madame Pompadour, incidentally, had nothing to do with naming winklepickers or brothel creepers.

As humans walked through history, we learned that shoes should be made for left and right feet and that sizing offers a better fit. Woven-grass cords gave way to shoestrings. Shoemakers added heels for both men and women in wood and metal, in heights both kittenish and “killer.” We’ve “concealed” shoes, tied them to cars and with superstitions, given them their own stores, and added bling and endorsements.

And in the end, we can still wear sandals, just like those of ancient fashionistas.

So how many pairs of shoes do you own? It’s the rare person who has just one or two, but even if you’ve reached Imelda Marcos status (which author Rebecca Shawcross calls “modest” at 1,250-3,000 pairs), you’ll want to take a giant step into this book.

That’s because “Shoes: An Illustrated History” isn’t just about those things we stuff on our tootsies; there’s Hollywood here, as well as biographies, pop culture, and plenty of history to dip your toes into. And while you’ll find a satisfying amount of narrative, what’s especially appealing are the dozens and dozens of full-color pictures of shoes, including bygone styles perfect for today’s runway, and footwear you’d likely boot to
the curb.

I think anyone with more than ten pairs of shoes in the closet is missing something if this book isn’t laying next to the bed. For you, Shoes: An Illustrated History is a real kick.