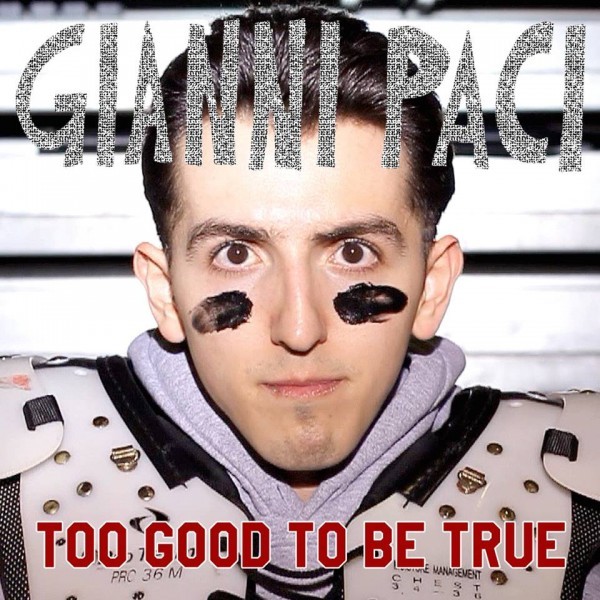 Gianni Paci, the 22-year-old Oyster Bay singer/songwriter/guitarist who has already shared the stage with members of KISS, Guns N’ Roses and Alice in Chains, recently filmed a large part of his second music video at Oyster Bay High School. The NYU grad has been working on his solo debut with producer Eren Cannata at Cove City Sound Studios in Glen Cove. On his latest single, “Too Good To Be True,” he adds some hip-hop beats to his signature guitar work and pop sound.

See Paci perform live on Wednesday, April 15, when he plays at Amityville Music Hall with Jenna Rose and Macy Kate, who was a contestant on ABC’s singing competition, Rising Star. The show is open to everyone over 16 years of age. Tickets are $10 and showtime is 6pm. Paci discusses his new song and video and how Katy Perry is “closing in” on him.

Pulse: What’s the story behind your new single, “Too Good To Be True?”
Gianni Paci: It was written at a moment in my life when I felt very much at peace with the way things were going. Everything just seemed to be coming together in a way that I was really happy about. At the same time, however, I was also reflecting on the difficulties I had faced in my journey up until that point—alas, the opening lyric, “no one told me just how deep the water was before I got in.” But as the song unfolds, it illustrates the transformative ability I’ve honed to make the best out of any situation… Every time I listen back to it I’m immediately transported to the exact headspace I was in at the time I wrote it. I guess you could say that ‘Too Good To Be True’ is one of the best opportunities for the listener to get a sense of who I am and what I stand for as I feel it truly represents me with my guard down.

P: What was the concept behind the video for the song? Did you play a lot of sports in high school?
GP: My friends in Twin Tomato Productions and I wanted to shoot this video as a way of showcasing three characters. It’s possible to see them as pieces of my personality accentuated to the umpteenth degree. Like my writing process for the song, our intention for the video was to capture a feeling or mood in its extreme instead of being too concerned with logistics. I think that mystery is valuable, and oftentimes, less is more. So we wanted the viewers to use their imaginations. We wanted to invite them into this world by giving them the space to come up with their own conclusions.
Contrary to what it may seem like in the video, I was not particularly athletic in high school. In junior high, I played soccer begrudgingly but that was pretty much the extent of it. In fact, I distinctly remember telling the soccer coach on a regular basis that I had to leave practice early so that I could go home and work on my guitar playing. I didn’t think twice about it at the time, but looking back, it took some gall to come out with something like that! I guess it just goes to show you what my priorities were.

P: When will you be releasing a solo album as Gianni Paci?
GP: While I’m in the midst of finessing a record deal, I’m spending a lot of time in the studio, writing and recording. However I will be releasing singles regularly in the form of music videos as a way of establishing a connection with my audience. These vignettes are a way of taking everyone with me on this journey to the next level.

P: Have you performed at Amityville Music Hall before? What do you like about the venue?
GP: Amityville Music Hall is one of my favorite venues on the Island! There is just such great energy in that room. Owner Jake Zimmerman did such a fantastic job with the space. I have played there in the past and I really appreciate the fact that the venue itself has a following and a great reputation. There’s a thriving music scene on the Island growing out of places like this.

P: Were you familiar with Rising Star’s Macy Kate before getting this gig?
GP: Before getting this gig, I had indeed heard of Macy Kate—that was part of the reason why I was so excited to book this show. I think it will be a really special night! Jenna Rose is also on the bill and I’m truly looking forward to meeting both artists.

P: Who would you most like to tour with, and why?
GP: If I had to pick one artist with whom I feel the most connected in a creative sense, it would be Katy Perry. She actually tweeted my college classmate’s (Kevin Garrett) latest single the other day. Among other strange coincidences and connections like this, I can’t help but feel that sometimes she’s closing in on me. ‘Katy, are you reading this right now?!’