When the comets were busy delivering the chemistry kernels for life to the pre-human Earth, the heavenly dust that landed on what is now Quito seems to have been enlivened by pisco sours.

Quito’s hills and grooviness recall San Francisco-but at one-tenth the price and in Spanish. Perched on a 9,300-foot plateau and encircled by mountains, Ecuador’s capital is the America’s largest preserved colonial city. A bustling place, yet, at the same time, a lesson in patience. Quito’s observant, hard-working locals interact with visitors like they’ve got all day to catch up. One woman, in particular, an herbal medicine healer, insisted that I sit down and repair my jetlag. The modern world continuing to mingle with ancient traditions is commonplace here. 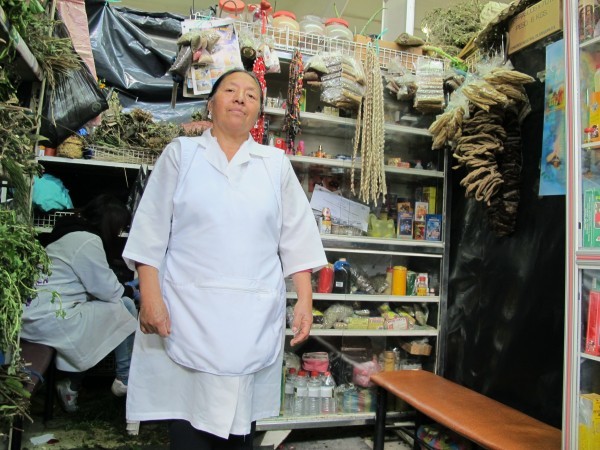 This herbal medicine doctor will cure your jetlag—or hangover

Quito is moving past its reputation as a stopover enroute to the Galapagos, having spent the last decade reinventing itself with a half-billion investment in its Old Town, where it doesn’t take long for the international traveler to notice the dramatic changes in cleanliness, infrastructure, street lighting, and focus on pedestrian safety. The elongated (32×4-mile) city overflows with fantastical Baroque, neo-Gothic, and Renaissance churches, handmade-hat shops, chic craft stores, interactive chocolaterias, homemade-sorbet parlors, and herbal-medicine laboratories—where all ills, including hangovers, are cured via herbal rubs or drinkable concoctions. There are also museums galore. La Compañía, a Jesuit church and one of Ecuador’s most elaborate, is decorated with gold leaf, gilded plaster, fantastical wood carvings—and a waist-high adjustable mirror facing skyward so you can look at the dazzling ceiling without craning your neck. Behind nearly every street-side façade in this archetypal Spanish village is an inviting colonial courtyard. You only need to step inside a few of these courtyards and let the magic happen, whether it be shopping, museum going, or dining. Graceful Ecuadorians haven’t forgotten to breath, or nap, thus, they have time to greet you. 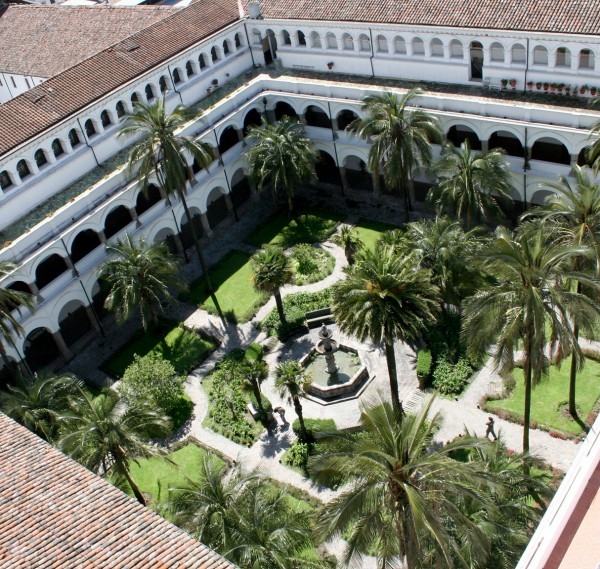 Ecuador’s Vice Minister of Tourism, Dominick Hamilton, interestingly a former travel writer, summed up Ecuador’s multiple World Heritage status in four words: “All in one place,” referring to it having the best of South America in a nutshell—featuring wildly megadiverse ecosystems, culture, and cuisine. Only one thing is predictable here. The sun rises and sets every day at six and the temperature is consistently between 70 and 75 degrees. In 1978, Quito was declared the first UNESCO World Heritage Site city and is considered the largest and best preserved historic center in the Americas. It defines highland calm, a South American Shangri-la with minimal machismo, only pure living among its historic riches. Temperate Quito has no need for AC or heat, but both are available. It also has delicious tap water. 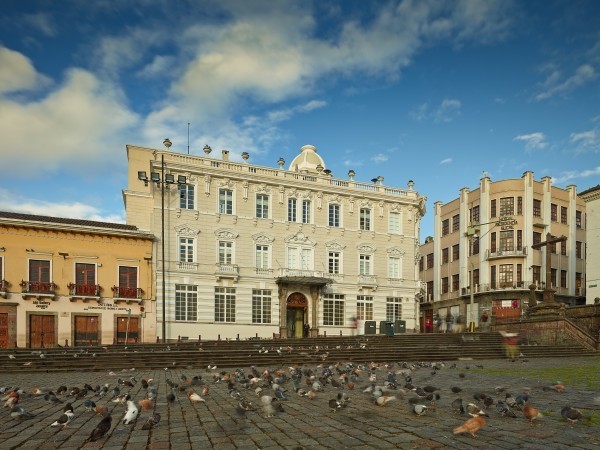 Some historic hotels thrive with multiple personalities. Casa Gangotena, inspired by a Venetian palace, is an imposing three-story 31-room white mansion with a classic courtyard garden and well-placed potted palm trees, tin ceilings, commanding views of Plaza San Francisco, and five-star everything. Originally the residence of several Republican-era presidents until it was destroyed by a 1914 fire, the manor was rebuilt in 1926 by the influential Gangotenas, whose lineage included industrialists, politicians, landowners, academics, and poets. Stately and exquisite for a boutique hotel, it was recently restored into ultra-classic digs—your stab at Ecuadorian royalty. 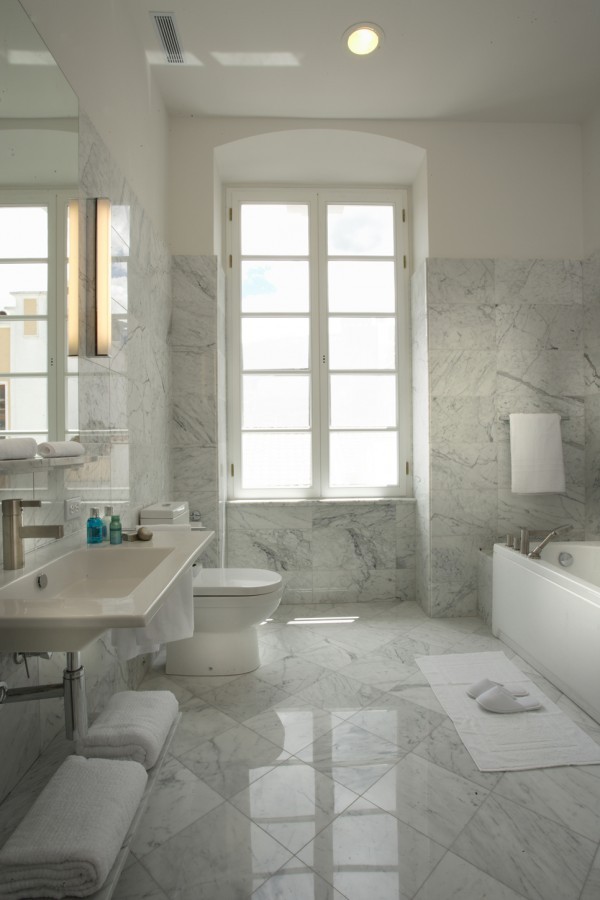 When you enter your room it announces comfortable—contemporary design merging with antique furnishings. Some of the guestroom bathrooms are bigger than some New York City apartments. Ascending another flight on the hotel’s grand stone spiral staircase you discover a third-floor terrace with sweeping 360-degree views of the hilly city. Up there, you can reflect on the adjacent plaza’s incredible history. Casa Gangotena, once the site of an Inca temple, sits atop the eternal heart of Quito, as both the Inca and Spanish settlers used the plaza as a vital open-air market. On my way back down to the lobby, I overheard a guest in the wood-paneled library discussing how the veteran staff makes “five-star service look easy.” 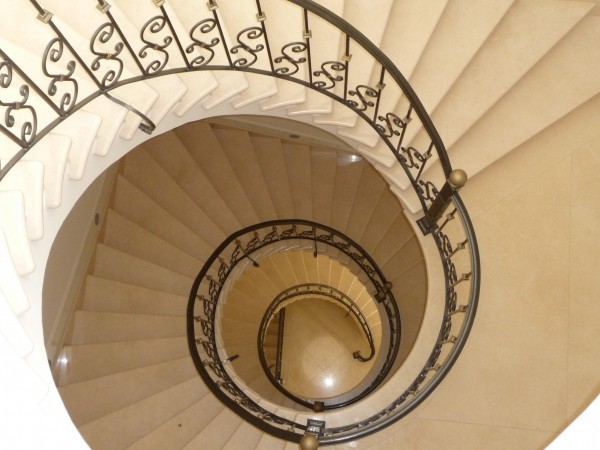 Casa Gangotena is also an epicenter for Quito’s most inventive culinary creations. Set within its courtyard restaurant’s glassed-in patio with art deco furniture and ceiling murals, award-winning Chef Andrés Dávila showcases enhanced traditional recipes from the Andes to the coast. Many dishes offer new twists with various corn grains, including a seared sea bass in black corn flour. Varieties of corn even find their way into paico, Quito’s traditional herb-infused potato soup—this is a soup-centric destination, and one of the it places to dine in Ecuador. 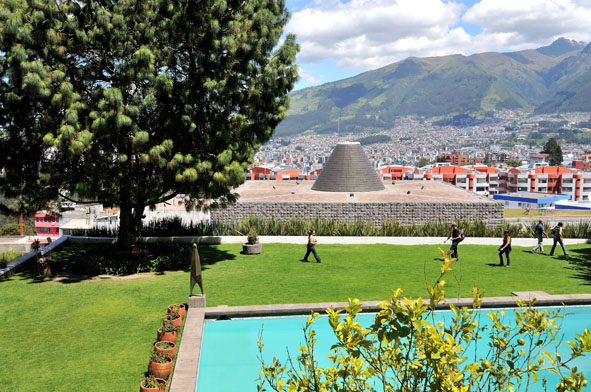 My unexpected Quito highlight occurred while visiting painter Guayasamin’s Chapel of the Man, an airline hanger-sized modern art museum sharing the artist’s (1919-99) gigantic macabre representations of the cyclical genocides that have devastated South America. On a much lighter note, next door is Guayasamin’s intimately preserved home and studio. Touring his palace brings you inside the mind and heart of this obsessed, quirky master. Upon seeing his living rooms, elaborate bathrooms, and bedroom, and seems-like-he’s-still-working-here work studios brings his genius back to life—and you start to like him. Born and raised very poor as the first of 10 children, his understanding of poverty remained a critical motivation behind his art. An in-studio cycling video of Guayasamin painting famed classical Spanish guitarist Paco de Lucia’s portrait overflows with emotional and waggish moments that drive home just how colorful Ecuador’s Picasso really was. Considered by some as South America’s artistic rough diamond, Guayasamin now moves me every day, as one of his paintings now graces my wall.

Down the road from Guayasamin’s creative campus is the Olga Fisch Folklore Museum and Gallery. Olga was one of Guayasamin’s early teachers. The Hungarian immigrant arrived in Ecuador at the age of 40 in the 1930’s and never stopped inspiring locals until her death. An artist, stylist, and collector, Olga had a visionary’s appreciation for Ecuadorian folk art and crafts. Her influence on local, archetypal folk artists endured for half a century—thus elevating that style of crafts into fine art.

Find Casa Gangotena here. Contact Metropolitan Touring for (at least) expert tour guides—they can also arrange pretty much anything in Ecuador, including private guided tours, hotels, lodges and Galapagos travel. Quito is the launchpad for ventures into all of Ecuador’s megadiversity.

Also, find your way to La Cuchara de San Marcos, a vintage-feeling organic vegetarian restaurant with craft beer and wine that’s blended into a cultural center. La Gloria Restaurant is in an artsy neighborhood, and it won’t disappoint.

And they’ll be no route canals getting here. Many airlines fly direct into Quito from the U.S.A. Quito is also kid-friendly. Stroll colonial Quito on Sundays when roads are only open to pedestrians and bicycles. Kids love the variety of piñata and children’s costume stores—not to mention Quito’s version of Willy Wonka with many candy, chocolate, and ice-cream makers. 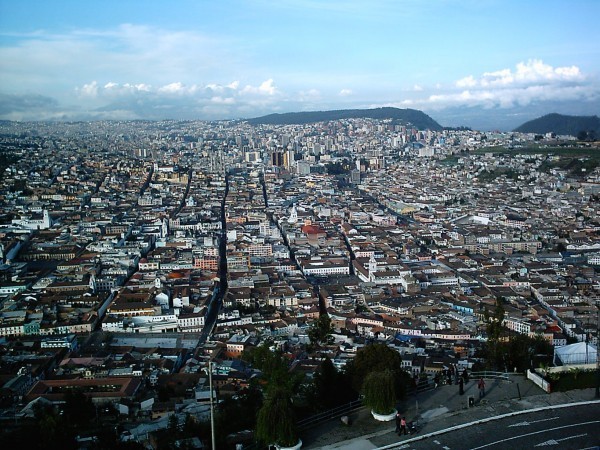