Twenty years ago, few people had ever heard of Oman, let alone takena vacation there. Today, the situation is…not much different. As this spectacularly beautiful country becomes better known to the world for its dramatic scenery, laid-back culture and friendly inhabitants, there will be more travelers coming home with tales of Old Arabia, the one that existed before the intervention of modern-day politics into a fascinating part of the world.

Located at the southern end of the Arabian Peninsula, bordered by Saudi Arabia, the United Arab Emirates and Yemen, and just across the Strait of Hormuz from Iran, the Sultanate OfOman’s neighborhood is not the most beloved by the world press. Unlike the headlong sprint toward ultra-modernization sought by some of its neighbors though, Oman drives along its new highways with a rearview mirror to the past.

Skyscrapers are virtually nonexistent in Muscat, the national capital where building codes regarding height and color (maximum six stories, white) keep a neat uniformity to the city’s downtown that leaves the natural setting un-obliterated by glass and steel. 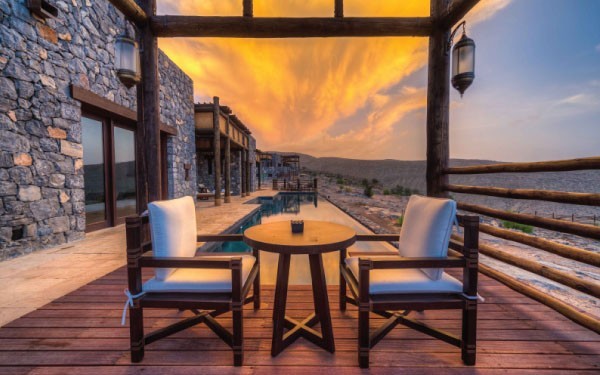 image: courtesy of alila jabal akhdar resort
Though visitors are eager to explore Oman’s various regions, almost everyone passes first through Muscat, a city reflecting the national ethos with verve and enthusiasm.It is a sensory experience without the overload so common elsewhere in a multi-connected world; though the picturesque Musandam Peninsula, the extraordinary greenery in the mountains of Dhofar and the historical coast of Sur are well worth visiting, first-timers may be fully content with Muscat, where there are enough sights and activities to keep busy for a week, maybe more,depending on how many senses one wishes to stimulate.

Scent To Please
Like its country of origin, fragrance company Amouage is virtually unknown outside the Gulf region, but this nimble corporation is currently in full expansion mode. Its exquisite products can now be found in fine department stores throughout the world, but the full Amouage experience is best enjoyed in situ. A visit to the headquarters offers a look into the full process of taking rare Omani ingredients such as oud, frankincense and mountain rose, the latter of which is still picked by hand in the Hajar Mountains and distilled using traditional methods. 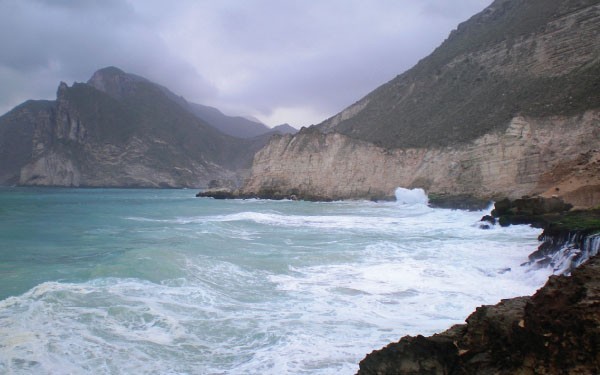 Cliffs at Dofhar. image: robert la bua
Good Taste
Another local enterprise, Salma’s Chocolates, began small but keeps on growing. The company’s single retail location is found in a pedestrian promenade on the ground floor of the Bank Muscat headquarters. Inside the store is a display of chocolates in colorful wrappers and silver and gold foil. Don’t expect to find anything remotely like Whitman’s Sampler here, not when there is the zesty taste of zatar (rosemary), the smooth mouthfeel of mahoo (a deluxe Omani version of halwa) or the alluringly aromatic luban (frankincense). The key to success has been originality; the owners have taken classic local flavors and “chocolatized” them to become unexpected taste sensations found only in their store.

Sounds Good To Me
The Gulf region’s first opera house, The Royal OperaHouse Muscat, immediately gained a loyal patronage from the moment it opened in 2011. Though opera has been a celebrated musical form for hundreds of years in Europe, and even longer in the Far East, it remains an unknown style in this part of the world.

As in Sydney, Paris, New York and other cities where the halls play influential roles in the cultural scene, the Royal Opera House Muscat hosts a diversity of events to appeal to a range of audiences. The ROHM’s seasonal calendar mixes classic Western opera and ballet pieces with a variety of musical performances from other genres, all of which benefit from the fine acoustics. The audience benefits from the remarkably large and comfortable seats upholstered in cloth patterned with violins. In Oman, no detail goes unnoticed. 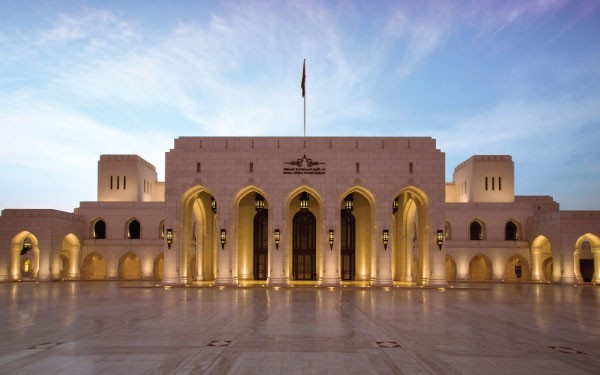 The Royal Opera House Muscat. photo: yoko hartono
Sight To Be Seen
The aesthetic lines and opulent decor of the Sultan Qaboos Grand Mosque make a deep impression on visitors who step into its immense interior. Everything about this ambitious project is impressive. Unlike some mosques in other countries the Sultan Qaboos Grand Mosque welcomes non-Muslim visitors. The carpet covering the floor of the main hall was woven in Iran and measures 196 by 230 feet; whatever floor is not intricately carpeted is covered by Italian marble. Suspended above are enormous crystal chandeliers drawing the eye upward.

The architectural features of Sultan Qaboos Grand Mosque take into consideration the cornerstones of Islamic culture; the Mosque’s five minarets, for example, represent the five pillars of Islam. In Islamic culture high respect is also given to the written word. Carved inscriptions decorate doorways throughout the complex, which includes a library, an information center and several other outbuildings clad in sandstone imported from Rajasthan.

The Royal Touch
Many hotels around the world have the word palace in their names; most of them use the term with hopeful hyperbole.The Ritz-Carlton Al Bustan Palace, Muscat’s finest hotel, is a true palace. Al Bustan was built on the orders of His Majesty Sultan Qaboos in 1985; 30 years (and several major renovations) later, Al Bustan still sets the benchmark for excellence in hospitality, a trait of local culture in which the Omani people take great pride. The entire top floor of the hotel is reserved for the private use of the Sultan, but guests elsewhere in the hotel are treated like royalty by a team of smiling, helpful hospitality professionals accustomed to providing a high level of service. 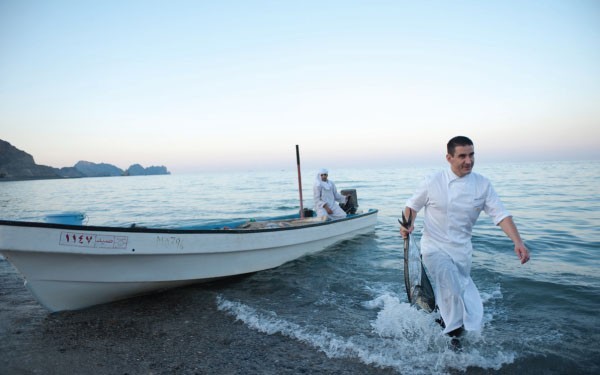 Al Bustan Palace staff will do anything short of walking on water for guests. photo: yoko hartono
As if the structure itself were not regal enough, the Palace’s sublime setting underscores the point that this isa special place. The hotel occupies a privileged position in a private cove backed by desert mountains and fronted by a deep blue Gulf of Oman. The water is Oman’s secret draw even as more divers and snorkelers are discovering its abundant marine life, reefs and pristine waters every day. For excursions into the city to experience Muscat in every sense, the hotel can make arrangements through select tour operators whose professional guides can gain access to sights and locations not necessarily open to the general public. Adding another sense to the Al Bustan experience, a Six Senses spa is now under construction in anticipation of receiving guests in an exclusive facility on the hotel grounds where mental and physical relaxation will be experienced in this most regal of vacation destinations.

Beyond Muscat
Oman offers a variety of destinations and experiences including the exotic sight of lush greenery and waterfalls in what is one of the driest countries on Earth. Not all year long, though. During the khareef season in July and August, when the tail end of the Indian Ocean monsoons make landfall at the base of the Arabian Peninsula, the mountainous areas above the Dhofar region’s coast catch the last of the moisture, turning an otherwise barren landscape into a temporary stand-in for Ireland. Rain sounds mundane to New Yorkers, but for residents of the Gulf it is a special experience,making the Dhofar region especially busy with visitors during the khareef season.

It is also in Dhofar where the best-quality frankincense grows high in the wilds of the coastal mountains. Frankincense has been a highly prized substance for thousands of years. Though grown ina few other places in this part of the world, Dhofari frankincense is recognized as the best. 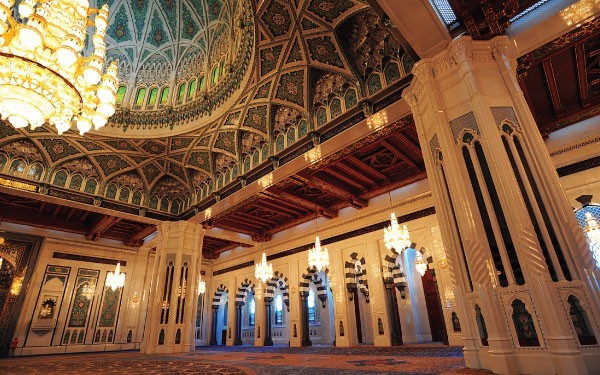 The Sultan Qaboos Grand Mosque was a gift from the sultan marking the 30th year of his reign. photo: yoko hartono
A visit to any perfume vendor in Salalah, the capital of the Dhofar region, can see perfumes and colognes custommade exactly to one’s preferences and specifications―a nice souvenir to match the memories of seeing sights such as Mirbat Castle, Museum of the Frankincense Land and the wild coastline.

To the north of Muscat is Musandam, a part of the Sultanate Of Oman separated physically from the rest of the country. Perhaps the most scenically bewitching of the country’s landscapes, Musandam’s dramatic cliffs,rock formations and ancient villages, some of which are accessible only by water, are surrounded by the various hues of blue in the sea and by pods of dolphins that jump alongside each passing boat.

In this part of the country, a dhow cruise through the desert fjords is an absolute must (a dhow is a small, traditional sailing vessel). One ofthe can’t-miss spots on such a cruise is TelegraphIsland, a hidden British outpost. The island is reportedly the source of the phrase “around the bend,”a term that derived from the heat and isolation endured by officers stationed there,who often went a little crazy.

For an experience outside the capital, it is not necessary to go far to Dhofar. Just two hours’ drivefrom Muscat International Airport is the city of Nizwaand the Birkat Al Mawzoasis. In Nizwa, a former capital, traditional life can be best observed every Friday at the ceremonial goat and cattle market. 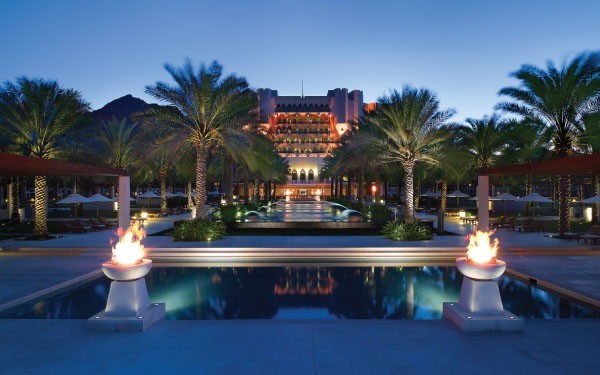 Ifinity pool courtesy of al bustan palace
More fun than it sounds, the market is a vibrant commercial event that follows elaborate customs with regard to presentation of the merchandise. No matter what the day, Nizwa Fort retains its position as one of the country’s most majestic man-made sights and provides a fresh perspective into a world vastly removed from life on Long Island. Near Nizwa is the newly opened AlilaJabal Akhdar resort, a landmark building set on the very edge of a cliffwith sweeping views of the valley below. The Alila brand may not be well known in the US, but it is one of Asia’s leading luxury hotel companies.This property on Jabal Akhdar (which means Green Mountain) is its first in Oman.

The Oman Ministry of Tourism maintains an extremely informative website, providing future visitors with useful background information for planning their trips. Those who have been to Oman already know why the country is growing in popularity; those who have yet to visit don’t know what they are missing.

GettingThere By Air
Though national carrier Oman Air does not fly to the United States, it is worthwhile connecting with the airline’s services from London, Paris, Frankfurt, or Zurich to enjoy a Business Class on par with most airlines’ FirstClass. A 1-2-1 configuration and seat pitch measured in feet rather than inches are only the start to the comfort. Oman Air has followed its country’s economic growth over recent decades and now ranks as one of the most pleasant airlines for passengers looking for amore genteel experience inflight and on the ground.