According to new research—prepared for the New York State Brewers Association and the New York Wine and Grape Foundation—the number of craft breweries in New York has more than doubled between 2012 and January of 2015, from 95 to 207. The state’s craft-beer-industry grew by 59 percent from 2013 to 2014, with a total economic impact estimated at $3.5 billion.

An area once scarcely inhabited by locally produced beer, Long Island evolved into one of New York’s craft-brewery hubs during this period of prosperity—and its future seems poised for continued success. In an article last month, WPIX noted that “the number of microbreweries on Long Island has doubled in just the last three years,” this while detailing Port Jeff Brewing Company’s involvement with a local homebrewing contest and the amateurs behind likely the area’s next debuting beermaker: Lithology Brewing. 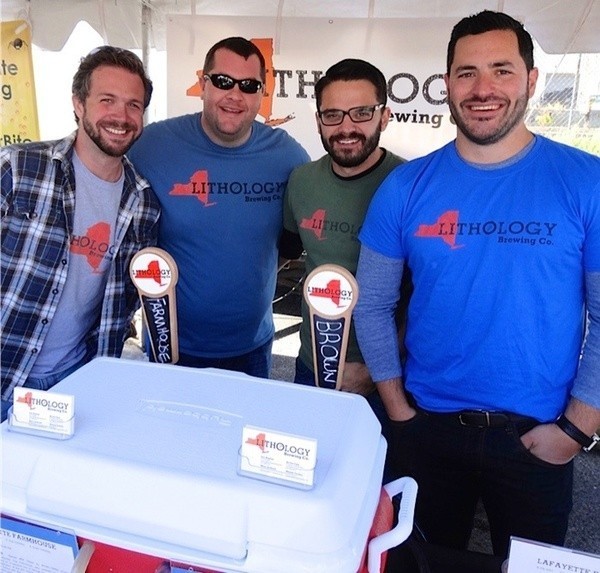 After starting the traditionally arduous application process last September, Lithology Brewing’s four partners—Marc Jackson, Kevin Cain, Lee Kaplan, and Manny Coelho—secured a federal license this February. They now await only state approval to sell their beer. “It’s a mysterious thing from what I’ve heard. It just comes in the mail. It could literally happen at any moment,” Jackson said. “When it does, we’ll start brewing right away. We’re ready.”

As the foursome anticipate starting commercially, these are five things to know about Lithology Brewing:

1) Lithology’s partners started brewing together in 2007. They have more than 20 years of combined experience. “Kevin and I shared an apartment in Deer Park and we’d brew in our kitchen, a really cramped space,” Jackson said. “Lee and Manny are college buddies and so we eventually started rotating brew days: Wednesday at our place, Friday at Lee’s… As far as recipe development it helped because sometimes we’d each brew the same beer with a little twist. It helped us to see what worked and what didn’t. We could really refine them, and that’s what we want. We’re the meticulous type.”

2) When I ask about the genesis of the company’s name, “Lee and I have environmental science and geological backgrounds, we were both scientists at one point,” Cain said. “We’re interested in rock and sediment as a whole, and Lithology is the study soil and sediment characteristics. These are earth’s natural water filters, and we all know the importance of water in beer. The connection seemed to be a perfect fit.” Jackson added: “Our water is what makes New York’s pizza and New York’s bagels unique. And beer is right up there with those. We’re fortunate to be able to brew with such great water on Long Island. Our name pays homage.”

3) Lithology will launch operations from Farmingdale’s A Taste of Long Island, which has a small brewery dubbed The Craft Microbrewhouse at A Taste of Long Island in its commercial kitchen. Jim Thompson, who owns Taste with his daughter, was a homebrewer in the 1990s. After a two-decade hiatus, he returned to his hobby and started this hub for fledgling brewers last summer, enabling them to rent and share his facility while remaining separate companies. This agreement is referred to as an alternating proprietorship and allows newcomers to function as a brewery without investing in a space. The Craft Microbrewhouse is used by Thompson, its host, and three tenant brewers: 1940s Brewing Company, The Brewer’s Collective, and Po’ Boy Brewery. Lithology will become the fourth.

3) A win at Hoptron Brewtique’s annual Beer Fields Homebrew Competition last June pushed Lithology’s partners to pursue brewing professionally. As promotion for the next competition at this year’s Beer Fields on June 27, which we alluded to earlier, they recently joined Port Jeff Brewing to make a larger batch (over 200 gallons) of their winning American IPA. Port Jeff’s version, Beer Fields IPA, will debut this weekend. “It’s a malty IPA and the Lithology guys are a nice laid back bunch,” said Michael Philbrick, Port Jeff’s owner and brewmaster. “We had a good day brewing the beer and it’s cool running into them at the various events in the beer community as they start to cut their teeth in the business.”

4) According to Cain, their initial focus is “to put out balanced styles, straightforward beers. As we grow and develop, we’ll introduce more complex recipes we’ve been working on for the last three or four years. I’d say we have about seven solid beers at this point.” Lithology will launch with two of these liquids. The first is L.B. I.P.A., the recipe used to win at Beer Fields. A “well-balanced IPA between malt and earthy hop profiles that’s very drinkable and should cater to everyone,” Cain said, it was originally made for Jackson’s wedding two years ago. The second, Lithology Brown Ale, also received an accolade recently: a bronze medal in the English Style Brown Ale category at the New York International Beer Competition (NYIBC). “I always wish more people made brown ales, and that’s what pushed us to have one at the forefront,” Cain explained. He describes Lithology Brown as “chocolaty, nutty, and malty. Plus a kick of hops to balance those flavors.”

5) Lithology has launched a campaign on Kickstarter to help raise startup capital. The crowdsourcing platform’s use by prospective breweries is not unprecedented on Long Island: Riverhead’s Moustache Brewing Company and Farmingdale’s Barrage Brewing Company both used Kickstarter successfully before opening, while Destination Unknown Beer Company, slated to open next month in Bay Shore, has already surpassed its current campaign’s goal by more than $500 with three days remaining. Lithology’s has raised over $17,000 to date. It must reach $35,000 by April 30 or the company will receive nothing. “We’re starting a brewery one way or another, but the Kickstarter will help us get off on the right foot and speed up the process for us to get out beer on the market,” Jackson said. “It’s money to buy more kegs, money for a truck and so on.”