I’m outside Miami’s EPIC Hotel, parked where the valets keep the really nice cars. Inches above my head, the drops from a torrential rainstorm pound the layers of fabric that comprise the soft-top of a 2015 Aston Martin Vanquish Volante. This is not what I had planned.

Since I wasn’t going anywhere for a while, I figured it was best to get really acquainted with the cabin of this hand-built, V12-powered British bulldog. After a 100-year existence, this has been touted as the Vanquish to lead Aston Martin into its second century. Expectations are high. 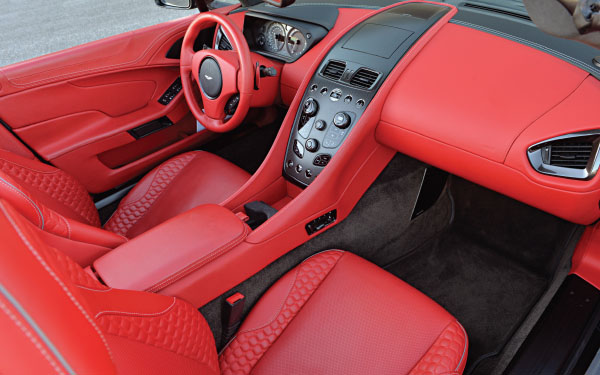 Glancing around, flash is not found. For a car that commands north of $300K, the cabin is incredibly Spartan from a driver’s perspective. Its steering wheel, save for the small silver and green wings, is almost nondescript. The analog gauges echo the feel of a simple, black-dialed chronograph with zero unnecessary trim. Perhaps the most attention-grabbing aspect is a cascading center-stack, which pours obsidian down from the windshield. Yet aside from its three prominent push-button controls and central knob, it too is executed in a flush, perfectionist but low-key manner. If diamond cuts and pearled trim are more your thing, this may not be the GT for you.

The rain has let up, it’s time to finally see what this car was built for. Pressing the hefty, glass and metal key fob square into the center console, the Volante roars to life with a cacophony of growls and gurgles that alarms a nearby crowd of onlookers. The sound is symphonious.

On the wheel near my right thumb, a red “S” pulses to life. I’ve been informed–or perhaps warned–that the car’s default is sport mode. I cautiously switch it off until I clear all the standing water. Five hundred and sixty-eight horsepower in a rear-wheel drive rocket ship can be intimidating on any surface, never mind a flash flood. The car’s “leisure” setting suits urban driving rather nicely, easing my nerves.

On that note of numbers, 568hp may not sound as impressive as it did just a few years ago. After all, you can buy a 707hp Hellcat or 545hp GT-R for much less; but neither of the aforementioned is constructed by hand or boast almost completely carbon-fiber bodywork. At a near-perfect 51:49 weight distribution, the Volante is Holyfield power in a Pacquiao frame, and I’m itching for the bell to ring. Driving down Biscayne Boulevard I see the standing water has subsided and switch back to sport mode. Immediately, the gentlemanly demeanor of this Vanquish is, well, vanquished. Luckily, the highway is not far off. Pulling aside to put down the automated top (without having to really stop), it’s finally go-time. 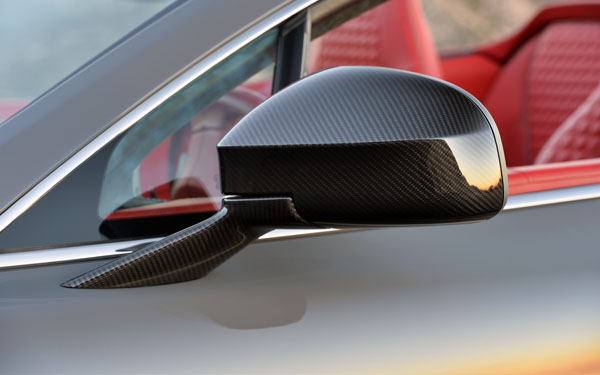 “Go” is something the Volante does with little provocation. Flattening the pedal in full automatic mode results in a slight delay, then an onslaught of power. But blip over to paddle-shift and experience an immediate, satisfying punch to the gut. Under hard acceleration, the exhaust note is an alarming drone that sounds like a turbo-prop about to buzz your head—and it’s delightful. Ripping through its eight-speed gearbox, the power is consistently aggressive. As I head southwest towards the Keys, the pavement dries and the tires heat up. In these optimal conditions, the convertible rides the pavement as if it’s on rails. I fight the urge to wave my arms in delight.

Over the past few years, there have been more than a couple “it looks like an Aston Martin” comments made on makes from the Jaguar F-Type to Ford Fusion. It’s not until you stand outside a car like the Vanquish, when you realize that nothing else out there truly mimics the low-slung, gaping-grilled visage of an Aston Martin. Gorgeously sculpted and stunning from every single angle, even the harshest of critics would be hard-pressed to find flaws.

A slow roll down Ocean Avenue is all it takes to validate that last statement (or, closer to home, Ocean Parkway). On a stretch of pavement where Lamborghinis and Rolls-Royces often go unnoticed, the attention the Vanquish garnered me almost got annoying. Almost.