David Bowie is widely considered a “rock n’ roll chameleon,” able to adapt to just about any musical style. But Todd Rundgren is just as deserving of this title, perhaps even more so, as evidenced by the recent release of his 25th studio album, Global. Although best known as a pop tunesmith (“Hello It’s Me”) and as a producer (Meat Loaf’s Bat Out of Hell), Rundgren continues to tackle numerous styles, heard via the electronic dance music (EDM) sounds throughout Global.

“It’s a bit of a follow-up on the last record, State, which was even more EDM,” Rundgren explained to Pulse. “So you can say that I’m regrouping a little bit, but at the same time, I’m involved in a lot of music with younger artists, and that’s starting to affect the way I hear music in a way. And I’m incorporating some of the influences that I gain in those collaborations, so it’s not really like I’m the changes overall that are in the music business.” 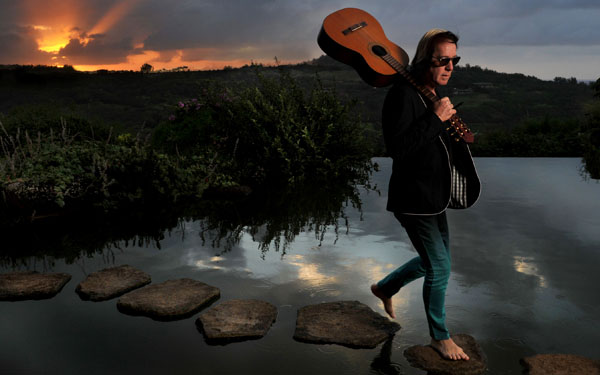 Rundgren continues to try new approaches on stage too, like the set-up of his tour. “It’s stripped down. It’s me, a DJ, two singer/dancers… and a lot of lights. That’s the approach we’re taking, which I think is in accordance with the music I’ve been making.”

Although he’s originally from Pennsylvania, New York City and Long Island conjure up fond memories. “Well, Long Island…My Father’s Place! And we played some big gigs out on Long Island as well. But for some reason, I always remember the smaller places. It goes back to when I became a performer. I was in a band called The Nazz and when that broke up, I decided I didn’t want to be in the public eye. I wanted to be a producer and work behind the scenes. Then when my first album came out [1970’s Runt], which for me was just an exercise in songwriting, I accidentally had a hit on it [“We Gotta Get You a Woman”], and had to learn how to perform. Some of the first shows that I did were with various combinations of musicians and often we’d be playing New York City—and especially out on Long Island. I remember Long Island was a big part of my education as a performer.”

In addition to his own material, Rundgren has been a respected producer for decades. But it is undoubtedly his work on Meat Loaf ’s 1977 mega-seller, Bat Out of Hell, for which he is best known. “I thought the album was a spoof on Bruce Springsteen. And we did it mostly live in the studio. I knew the songs were overlong, and that was part of the ‘goof on Springsteen’ part. I knew that it might be a hard sell. So when we were making the record, nobody thought that it would become as popular as it has. Even to this day, it’s sitting on the charts somewhere— probably in England or Germany.”

This band clicked so well from the beginning that Ringo’s been trying to keep us together for as long as possible.

You may also recognize Rundgren from his numerous performances with Ringo Starr & His All-Starr Band, with whom he was touring at the time of this interview. “This tour, essentially, has been going on for three years. This is something that Ringo has never done before—he usually tours for a season or a year with a band, and then he breaks the band up, takes a year off, records another record, and then puts a new band together. But this band clicked so well that Ringo’s been trying to keep us together for as long as possible. Every time that we think that we’ve wrapped it up, we’re done, and he’s ready to move on, he comes up with more dates! And there’s rumors flying about another tour, so Ringo’s going to keep us together, I think.”

With all of the hits he has racked up over the years either on his own, as a member of prog-popsters Utopia or as a producer, you’d think Rundgren would be a shoe-in for the Rock and Roll Hall of Fame. But so far, he has not been inducted. “I have never cared about that. I really have no idea what that’s about—what the process is like. I always said at a certain point they’re going to run out of people… they’re going to have to induct Billy Idol, at which point half the people will wonder why they’re in there in the first place. It’s not anything that I think about or care about, and really, my advice to my fans is don’t think about that, because it’s not important to me.”

But which recording does Rundgren feel is the most overlooked? “Overlooked? I don’t really track that stuff so much. The funny thing is I put out an album like A Wizard, a True Star after Something/Anything? and that creates a big kind of stink, because I’m not following up on the previous success, and I’m hardly even recording singles anymore. And then as it turns out that album is having some influence on a young generation of artists today, and that’s why I’m doing remixes for Tame Impala and Nine Inch Nails and stuff like that—almost solely because of people’s fascination with that record. So I’ve come to realize that maybe things don’t succeed in the time period that you put them out, but a record is a record. A record is forever—at least in modern terms.”