I briefly mentioned Destination Unknown Beer Company near the end of my last article, one that started by referencing new research revealing—or confirming, to the impassioned, interconnected world of local beeronauts—New York’s beer-industry boom over the last three years, and continued with introducing Lithology Brewing Company amid a month-plus Kickstarter campaign. Lithology’s four partners reached their goal of $35,000 on the massively popular crowdsourcing website, then surpassed it by $1,335 before last Thursday’s deadline. They only await state approval before commencing from Farmingdale’s The Craft Microbrewhouse at A Taste of Long Island as one of its tenant brewers.

Destination Unknown experienced similar success using Kickstarter recently, the reason for my aforementioned mentioning, strongly finishing a $20,000 campaign with $24,028 on April 26. It’s a different post-pledge plan for the greenhorn company, however, involving the launch of a physical brewery and tasting room in Bay Shore during Long Island Craft Beer Week, an annual 10-day series of events to promote the area’s prospering culture, this Friday, May 8. 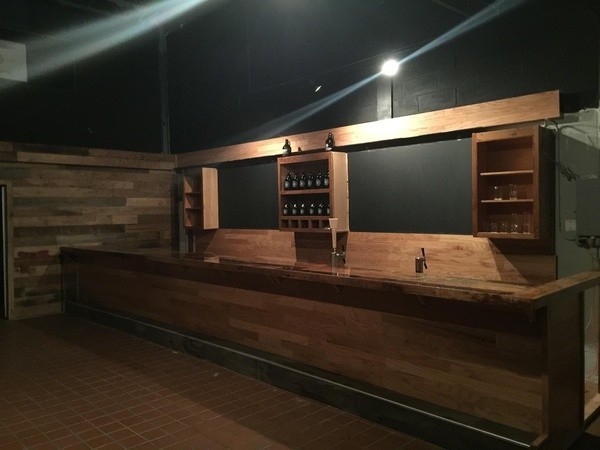 Destination Unknown Beer Company’s tasting room, which opens for the first time Friday.
Brad Finn and Chris Candiano are the duo behind Long Island’s next brewery to open, longtime homies who reconnected more than a decade after attending West Islip High School together through a mutual love of homebrewing. A shared penchant intensified over the five-year period of brewing in Finn’s garage that followed, until “it became a habit,” Finn said, laughingly admitting his kitchen was once filled with as much as 70 gallons of fermenting beer. His wife wasn’t thrilled with the smell of carbon dioxide regularly permeating their entire house, but she always encouraged him to continue trying new recipes, brewing bigger amounts. Candiano’s wife offered the same unwavering support. “They’ve both been there all along, since day one,” said Candiano. “They said, ‘If you’re going to do it this much and spend all this money on a hobby you love, just go for it.’ So we went for it.”

The pair signed a lease on a 2,000-square-foot industrial unit at 1 South Chicago Avenue and applied for a federal license in November. They spent the next few months arduously renovating the long-neglected space. “We had to pressure wash the floor four times. It was a mess,” Candiano recalled. They dismantled the unit’s second floor, previously used for offices, and built a bar on the ground level with repurposed wood from a house in East Hampton. They also made a small walk-in cooler for keg storage. Candiano owns a construction business, so all the labor was handled by him and his employees. “Having the pickup truck in the driveway, you’ll just get the itch to drive to Home Depot at 8:00 p.m. on a Sunday and start making stuff,” he said.

At the beginning of April, with their Kickstarter started, the duo received a state (Farm Brewery) license and immediately began brewing to accumulate as much liquid as possible for their launch. Each batch made yields about 30 gallons, only a few kegs, so some of the tasting room’s eight drafts will initially serve other on-Long Island breweries. (Great South Bay Brewery, Barrage Brewing Company and 1940s Brewing Company will pour at the Beer Week event.) According to Finn, it’s a “win-win move. We want to build relationships with other beermakers in the area which it accomplishes, and doing this also takes away the pressure of us making a set amount of beer. This’ll help while we get our feet wet and start to get a scheduling system going.”

Destination Unknown Beer Company’s logo.
At one point during our conversation, I inquired about the brewery’s name. Candiano immediately removed his shirt and turned around, revealing a tattoo nearly identical to the Destination Unknown logo covering most of his back. He explained: “I’ve traveled a lot of countries, I’ve worked at a golf course as a kid, I’ve had my own construction business for years. And now I’m opening a brewery. What I mean is, you never know where you’re going to be down the road, whether it’s one year, two years…”

“I got this compass tattooed long before we had an idea of opening a brewery. But the idea behind it fit what we’re doing here. We’re not pretending we know the answers. We just love beer and followed our dream. We’re called Destination Unknown because who really knows what’s going to happen next? We’re not afraid to admit that.”

Before the unveiling of Destination Unknown on Friday, I asked Finn to discuss their first four beers:

Dominick White IPA//7.2% ABV: This is our take on the white IPA style, and it’s a personal one: My brother Dominick White passed away in 2003 at the age of 21. This is my tribute to him. As a craft drinker, white IPA is one of my favorite styles. I’ll never forget the first time I had Blue Point’s Mosaic Session IPA. While it’s not a white IPA, it really showed me that an IPA didn’t have to be attached to a huge alcohol content and a ton of bitterness. It was a gateway to discovering the white IPA—Blue Point has a great version of this, as well—and after that I knew I wanted to make one, hitting a perfect balance between lightness and hop bitterness.

We worked on Dominick for a few years, changing the ABV and the aroma. Our dry-hopping methods were the thing that changed the most from batch to batch; I just wanted the aroma to burst out of the glass. After some time we finished at the current ABV which people are always shocked to see—everyone expects all wheat beers to be really low in alcohol. The malt profile is very low and the body is highlighted by a generous amount of wheat and Belgian yeast. It’s dry-hopped with Galaxy hops to give a very citrusy, fruity aroma. We tried Citra hops but that was a little too familar to a lot of other IPAs around. Galaxy gives it a little touch of peach that I love; it’s distinctive. I think we found the perfect balance of witbier and IPA with Walter. A common response from someone drinking this beer is “This is good, and I’m not an IPA person.” To me, that’s the ultimate compliment.

Breakfast Stout//5.1% ABV: My partner Chris is the stout guy, so this is his baby. I have to say that we were both torn at times over the years with this beer. It started as just your basic breakfast stout we brewed for St Patrick’s Day car bombs; we just wanted something like a Guinness that we could sit and drink. Then as our beer education increased we felt pressure from all of the big and complex stouts. We noticed people raving about barrel-aged stouts and ones with huge ABVs. We wondered, Do we want to make ours a Founders Kentucky Breakfast Stout or Goose Island Bourbon County Brand Stout? We’ve always tried to stay true to our roots with brewing and those types of beers were not what we were looking for in our stout. So we went back to the old recipe that had a balance of oats and wheat. We steep local coffee—mostly from Babylon Bean—just before fermentation to give it a nice espresso finish. It comes in at a low ABV which allows us to have one before noon if needed. And that was always the original idea.

Westtown IPA//6.3% ABV: This is one of our newest IPA recipes and it was the first time we brewed it. But I’m okay with saying it’s not exactly where we want it; we are always learning and trying new things and so we’re not afraid to fail. Unfortunately with the small size of our brewhouse at one barrel, or around 30 gallons, our “pilot batches” become the beer we serve. This is a “SMaSH” beer, meaning Single Malt and Single Hop. We used all two-row pale malt and the hops were whole-leaf Cascade hops donated to us by Westtown Beer Works, a farm brewery in upstate NY. For the ABV this beer has a more malty profile than a traditional American IPA. With the malt at the front you may expect to have the ABV a little higher. Although this beer could be a little more bitter we were very happy with how it came out and we’re even more excited to use some local New York hops in the future that come right from the farm, not in a vacuum-sealed retail bag.

Dubbel Rainbow//5.1% ABV: We never thought of ourselves as dedicated to one style of beer, but now sometimes when we look back at all the beers we made as homebrewers, we seemed to do a lot of Belgians; and why the hell not? They’re delicious! The heartiness and complexity of Belgian yeast strains allow you to do so much, so we’ll be doing a whole Rainbow Series of Belgian-style beers that play off the Double Rainbow viral video from a few years ago. Back then we had our main Belgian and then we made a Belgian dubbel. We couldn’t just call it that and sure enough the week after we bottled it that video went viral and Dubbel Rainbow was born! With its popularity among our friends and family over the years we knew that we had to make it for the grand opening. It comes in at a drinkable ABV and it’s loaded with a ton of Belgian dark candi sugar. This darkens it up a little more than a traditional Belgian dubbel and gives it a unique character of its own. Be on the look out in the future for Tripel Rainbow and Quadrupel Rainbow, by the way. Are you ready to taste it?