George Martin Restaurants corporate chef Frank Greco has had beef patties following him his whole culinary career, starting with his first gig at long-closed Heads and Tails in Commack. But it wasn’t until recently that the burgers became star performers.

“Going back to Heads and Tails, the menu had to have a token burger on it,” Greco said. “We had a good one, but it was more of a nuisance and I remember the cooks being like ‘My God, another burger? Why can’t these people order some real food?’ But now the burger has become more of a chef-driven thing. People are really putting the time and effort into making it really, really good.”

When George Martin made the logical move and opened the meat patty-centric GM Burger Bar a year-and-a-half ago in Rockville Centre, Greco rolled up his sleeves to elevate raw meat mixes to something extraordinary.

Greco is a hands-on kind of guy and relishes the tangible work. A former cabinetmaker who maintains a wood shop in his garage, at first he wasn’t enamored with the restaurant business. That is, until he got his hands dirty in the kitchen. 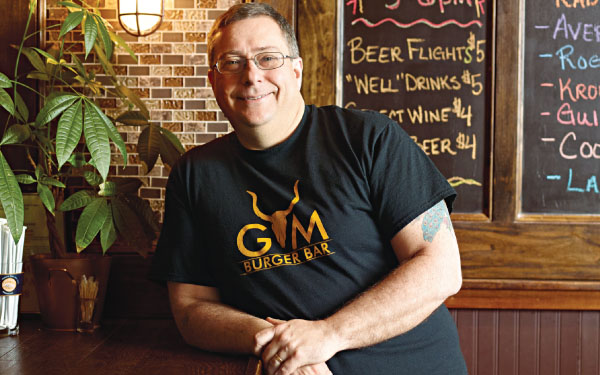 “I hated it,” said Greco about his first job bussing tables at Heads and Tails at age 15. One night a dishwasher stormed out on his shift and the manger asked him to help out in the kitchen. “I loved it in the back so much better. It was just the mystique of being in the kitchen. It was cool. And I took to it right away.” Greco pitched in doing prep work and within a couple of months was on the line plating vegetables and working the fry station.

He was also apprehensive about his first culinary class at the New York Institute of Technology. “I said, ‘Let me take a couple of classes, see if I like this school thing. When I got in there for the first class, the chef gave us a half hour lecture on how to use the knives and then threw half a cow on the table and proceeded to tell us how to break it down. I was like ‘Alright, I can do this. This is my kinda school.’”

To create GM Burger Bar’s mixture he set to researching. “Everywhere I went I had different vendors dropping off little bags off meat that I could cook differently, taste different blends, procedures, seasonings.” Ironically, when it came to taking the high-quality burger components from GM’s steakhouses and Grillfire and reconfiguring them for what would become Burger Bar’s signature dish, Greco made an uncharacteristic move: he took a hands-off approach.

After scaling off 8oz sections of the burger mix, Greco’s prep guys form loose balls. And that’s it. Until they hit the cooktop and are pressed with a spatula they’re essentially meatballs. Greco said that this creates a distinct texture. “It stays lighter and almost has a fluffy consistency.”

The signature burger is an all-beef blend of short rib, brisket and sirloin—different parts of the animal equals different flavors. But to really perfect the mix, Greco got scientific. “I found that we had to add a little more fat to the mixture. Instead of straight up 80-20, we had to go 77-23 to get a little more fat in there.” It’s that exact; and the meat processing is also meticulous. To get the melt-in-your-mouth feel, the beef mixture goes through a “triple grind,” an extra round of grinding that creates a finer blend.

All the burgers are cooked on a hot steel flattop. Another equation: more brown equals more flavor. It runs a little counter to the traditional notion of grilling burgers. But the proof is in the patty.