TOPICS
Up on the roof, out on the street
Down in the playground, the hot concrete
Bus ride is too slow
They blast out the disco on the radio
Rock, rock, Rockaway Beach
—“Rockaway Beach,” Ramones
The Rockaways possess an irresistible grittiness—a laid-back beach town vibe crossed with New York attitude. It’s an episode of Gidget with the A train as the backdrop. In this land of surf and sand, streetlights take the place of palms trees.You can hear the dichotomy of the Rockaways in the Ramones’ “Rockaway Beach.” The song encapsulates the band’s formula: craft a bubblegum beach tune, then play it through so much sneering distortion that the solid songwriting becomes almost indiscernible.Both the Rockaways and the Ramones prefer to keep it real, that’s what makes them ours. Rockaway beaches feature cool, crisp water, brilliant sun and a sparkling new boardwalk, but in order to enjoy them, you have to overlook the occasional bleached beer can or wad of orphaned gum. Of course, the Rockaways got a lot grittier after Sandy deposited about a million, zillion tons of grit along the East Coast. The area saw decades of infrastructure swept out to sea and recovery has been protracted. The fact that the rebuild is still underway however, presents a unique opportunity to watch a community heal. 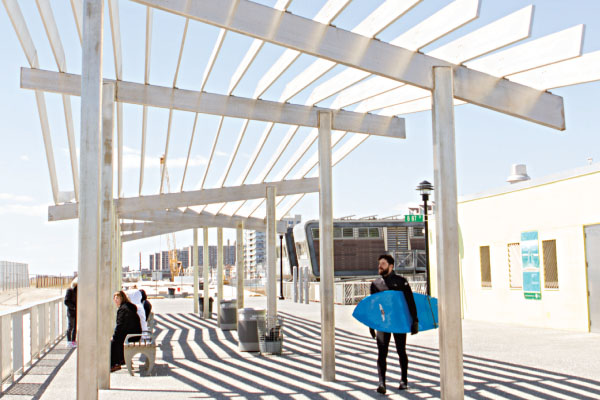 A sequence of visits to the Rockaway Boardwalk over the coming months will provide a time-lapse view of a prideful community rebuilding.
In the aftermath of Sandy it was popular to say, “You can knock the Rockaways down, but you can’t knock them out.” Today, areas like the Rockaways and Long Beach—which has its own new $42 million boardwalk—provide a gratifying reminder that those rallying cries weren’t just rhetoric.

The New York City Department of Parks and Recreation (nycgovparks.org) has posted a timeline for the $140 million Rockaway Beach Restoration Project. It promises that the boardwalk (and ancillary structures) will be rebuilt between 86th Street and 97th Street by Memorial Day, and that it will reach 107th by July 4th. “The entire boardwalk will be open for beach season 2016,” the site says, adding that all construction will be complete by summer 2017.

Walking the boardwalk in the coming months will yield a time-lapse perspective as shops open and re-open and buildings experience growth spurts. The ongoing nature of the project actually provides an ideal setting for Long Islanders to look back on Sandy and give ourselves a pat on the back. It’s important to remember how bad things were and how far we’ve come. The struggle isn’t over yet, but it’s encouraging to think that we actually did it. We really were stronger than the storm.