Sometimes I Sit and Think, and Sometimes I Just Sit
(Mom & Pop)
This Australian singer-songwriter is proof that you never know what people are going to connect with when it comes to music. Barely a year ago Barnett’s debut, The double EP: A Sea of Split Peas, was critically acclaimed and her folky, train-of-thought wordplay and hipster-friendly indie-pop hooks were all the rage in the blogosphere. Now Ellen likes her. That’s right, freakin’ Ellen! Barnett’s latest release lives up to the hype and more. The album’s disparate singles are the perfect primer to her sound; “Depreston” is a gorgeously pensive ballad about adulthood while “Pedestrian at Best” is a crunchy, riff- driven kiss-off to an unworthy lover. The songs couldn’t be more different in sound, proof that she really can do anything and impress just about anybody along the way. Barnett is so buzz-worthy she’s booked for a three-night stand at The Bowery Ballroom in Manhattan May 19-21.

Twin Peaks
Wild Onion
(Grand Jury)
One would expect a band named after a noir-ish David Lynch television series to sound dark and foreboding to the point of pompousness, right? Well, we’re pleased to report that this Chicago quintet, despite having some members in their teens, aren’t channeling that particular brand of avant-garde angst. In fact, most of the songs on their second album sound like something you’d hear on a Wes Anderson film soundtrack. They’ve been compared a lot to Exile on Main Street-era Rolling Stones (singer Cadien Lake James is a dead ringer for Jagger on the strut-worthy jam, “Good Lovin”), but their mid-70s, pre-punk leanings are undeniable, conjuring up flashbacks of bands like T-Rex (“Making Breakfast”), Big Star (“Flavor”) and The Buzzcocks (“Fade Away”). Taken as a whole, it can seem a little unfocused, but when every song is this good the youngsters can be forgiven for skipping their Adderall. Catch them when they play the Music Hall of Williamsburg on May 2. 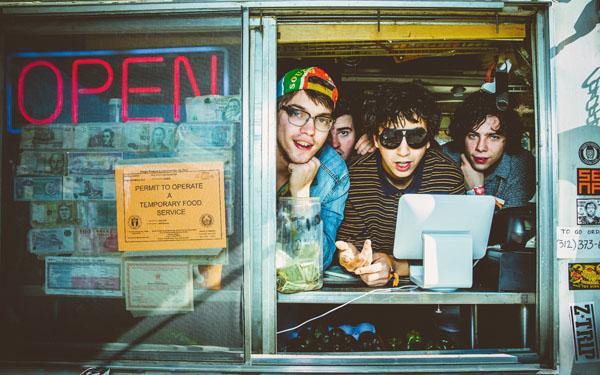 Purity Ring
Another Eternity
(4AD)
Along with fellow electro-popsters Chvrches, AlunaGeorge and MNDR, there seems to be a trend of female-fronted groups attempting to capitalize on an insatiable market for electronic dance music. And just like those other groups, the songs on this co-ed Edmonton duo’s second album seem more suitable for the after-after-party than the fist-pumping throngs at the club: “Push Pull” and “Bodyache” are songs to throw on in anticipation of texting that certain someone to see if they want to come over. Front woman Megan James’ voice is equal parts sexy and demure as she coos over bandmate Corin Roddick’s cushy, orchestral beats. Music trends are often fleeting, but Purity Ring has enough pop smarts and musical cachet that it seems likely we’ll be hearing their songs blaring out of the neighbor’s house even after the EDM bubble bursts. Oh, and they have some pretty killer light effects at their concerts. Check them out when they play June 2 at Terminal 5 in Hell’s Kitchen.