There’s a secret, slow motion world right under ours. A mostly dark, mostly silent dimension where strange, peaceful creatures creep and swim through a thick ether of eddies, sweeps and tides. Happily, human beings are capable of exploring this magical world, but first they must bite down on a regulator, strap on some SCUBA tanks and tighten their dive masks.

SCUBA divers do not generally dream of following a descent line into Long Island’s sounds and bays, but I believe they should. Our shores may not boast the same warm, sapphire conditions found off Cozumel or the Bahamas, but there are plenty of fish in New York seas, and they’re well worth a visit.

Long Island offers diving on every level—from chilly, long-lost wrecks to sedate shore dives just 15- or 20-feet deep. Like so many things in and around New York, diving off the East Coast does tend to be tougher and colder than in other locales, but in some ways that sense of challenge can add to the experience. Although I’ve been a certified SCUBA diver for more than five years, my guide to the local dive scene, Randy Randazzo of the Hamptons Dive Center in Riverhead, started me in a swimming pool. Randazzo explained that divers who’ve spent most of their dive time in tropical locales under near-flawless conditions, can be taken by surprise in New York waters, “You’re dealing with a hooded suit and gloves and boots, a lot of people aren’t used to that,” he said. 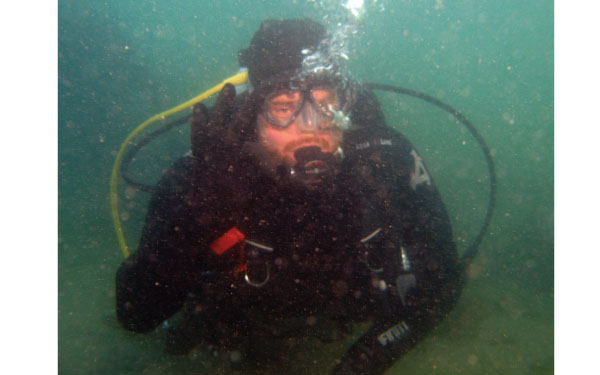 The Hamptons Dive Center pool was a great place to review SCUBA basics like mask clearing, regulator recovery and buoyancy control. The goateed Randazzo also advised me to shave the little bit of beard under my nose so the hairs wouldn’t make my mask leak. After I felt comfortable with the slightly increased difficulty level of East Coast diving compared to warm water diving, Randazzo and I agreed to meet at the Ponquogue Bridge just before low tide on a weekday evening.

There are actually two bridges in Ponquogue. Well… one and two thirds. A new span was built over Shinnecock Bay in 1986. This new construction is used by the traffic between Hampton Bays and Westhampton Island. The old wooden drawbridge was retired, the middle section was removed and today the two approaches on either side serve as fishing piers. The negative space previously spanned by the drawbridge is now a marine park.

Randazzo and I donned our wetsuits and strapped on our tanks in the flatbed of his pickup. Then we walked across the parking lot and into the water—a much simpler exercise than the hot, overly neoprene-y boat rides one generally takes in the Caribbean. We followed a sunken pipe out to the end of the abandoned bridge approach, then swam a couple dozen yards west to explore the marine life between the pylons of the new bridge.

When I told friends that I was planning to dive off Long Island the most F’d AQ was, “What will you see down there?” The answer turns out to be… a lot! The world off of our shores is distinctly browner than the azure waters in warm dive spots, but it is no less lively. As we descended, following the natural slope of the sea floor, Randazzo pointed out the diversity of marine biology spreading out beneath us. Hundreds of crabs scurried sideways to avoid our approach and families of fluke flattened themselves out to become invisible against the sandy bottom. As we dove deeper, the size and variety of fish increased. We saw a small school of sea robins, large-headed, armored fish with thin pectoral fins that look like legs. The sea floor was completely blanketed by a vast field of muscles and Randazzo showed me how to break open the black mollusks and attract nearby fish for a snack. 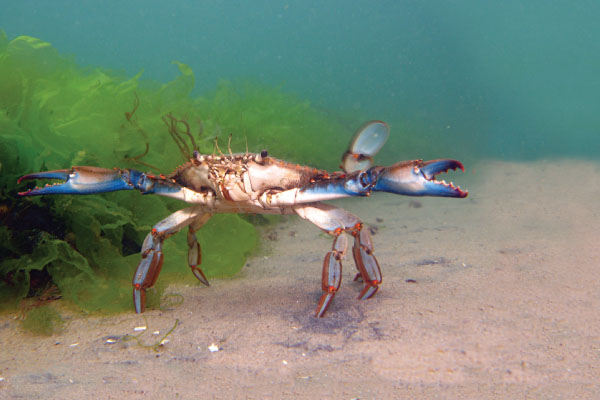 Among the most interesting things we saw under the bridge was what I must assume was the great grandpappy of all horseshoe crabs. I’m not telling fish tales when I say this old fellow was 18 inches across and had a whole apartment building of snails and barnacles growing on its back. Another surprise was the number of tropical fish we saw. Randazzo later explained that these fish are usually swept up from warmer climes by the gulfstream and become trapped off Long Island. We saw several juvenile snowy groupers—purple-black fish with iridescent white spots—and our photographer, Chris “Fish Guy” Paparo, used a sunken Pepsi can to catch a tiny, coppery Short Big Eye, which he gave to a marine biologist friend. (Most of the tropicals die if left to winter here, so divers collect them for aquariums or their personal tanks.) Other exotics that can be seen off Long Island include sargassum, triggerfish, leatherback sea turtles, octopi, puffers, seahorses, dolphins and seals. But, a grandfatherly fellow we encountered as we removed our gear post-dive told us that if we were looking for mermaids we were out of luck. He’d already caught them all.

It’s easy to forget that the waters around us don’t stop at the beach or among the white-capped waves, but by peering through a SCUBA mask we can see the active alien dimension that’s always churning away right below our own world. It may be a little harder to achieve that rare glimpse here than in other places, but now that I know the opportunity exists, I plan to drink in the view a lot more frequently.