Four teams, 175 games, almost 4 million fans—1 stadium. If 1975 wasn’t the most successful year in New York sports—and it wasn’t—then it was certainly one of the oddest.

In an era when baseball and football teams sharing large, multi-sport stadiums was common, 1975 was anything but in the Big Apple. For that one crazy season, four New York teams—the Mets, Jets, Yankees and Giants—all called Shea Stadium home.

For the Mets and Jets, Shea had been home sweet home since 1964. Ten years later, however, when the Yankees were refurbishing Yankee Stadium in the Bronx, they struck a deal to join the fun in Queens for two years.

“Ahh, that season be the death of me,” said Pete Flynn in a hushed Irish brogue while watching the Mets current grounds crew prepare before a game at Citi Field. From the day it opened, Flynn was the man in charge of keeping Shea Stadium’s Kentucky bluegrass and dirt infield playable for all games. As the head groundskeeper from 1964-2008, he was responsible for the field that most unusual year.

“It was a nightmare,” said Flynn, now retired and recently inducted into the Groundskeepers Hall of Fame. “I didn’t have a day off for months. And the field never got a day off. By the time the football season was over, there wasn’t
a blade of grass left in the entire place. That field just wasn’t made to be used everyday.”

However, it was not until Dec 19, 1974, that things got really interesting. It turned out that the Giants’ new, state-of-the-art facility in New Jersey would not be finished in time for the 1975 season. And to make matters worse, the Giants players were getting tired of playing their home games at the Yale Bowl in Connecticut, where they spent the previous two seasons. “Our players have never accepted it as a home field,”

Giants owner Wellington Mara told re- porters following the 1974 season. “If a group of athletes thinks it’s bad, then we’re at a competitive disadvantage.”

When New York City Mayor Abe Beame extended an invitation to the Giants to play in his backyard, it was gladly accepted. “I always felt two football teams couldn’t exist at Shea Stadium,” Mara said at the time. “But the positive of playing close to home outweighs the negative.” Not for everyone though, as Flynn recalled his reaction when he heard the Giants would become the fourth tenant at Shea. “Ha,” he laughed sarcastically. “It wasn’t a good one, I can promise you that.”

While fans may have had plenty of opportunities to fill the stadium that summer, the teams weren’t giving people much reason to make the trip. The Mets—two years removed from the National League pennant—had some positive stories that season, including Tom Seaver winning his third Cy Young Award. For the most part however, the Mets did not have many highlights and finished 82-80, good for just third place in the National League East. For them, sharing a stadium with the Yankees was not a big deal. “I remember that (the Yankee players) weren’t too happy with the dimensions of the park because Shea was a lot bigger than Yankee Stadium,” former Mets all-star shortstop and Long Island resident Bud Harrelson said.

“But I don’t remember really even seeing the Yankees at Shea that season. When we were home, they were away. And they used the Jets’ locker room, so we weren’t kicked out of our clubhouse, which was good.”

Like the Mets, the Yankees also finished in third place in 1975. However, the team suffered its biggest loss on June 13, when their young star outfielder Elliott Maddox got his right foot stuck in the swampy outfield grass, severely injuring his knee. Maddox, who would never regain his top playing form, sued New York City because of the bad conditions. Years later Maddox lost his suit, the New York Court of Appeals ruled that he knew the risks and played anyway. In an ironic twist, Maddox finished his career patrolling that same outfield as a member of the Mets from 1978 to 1980. 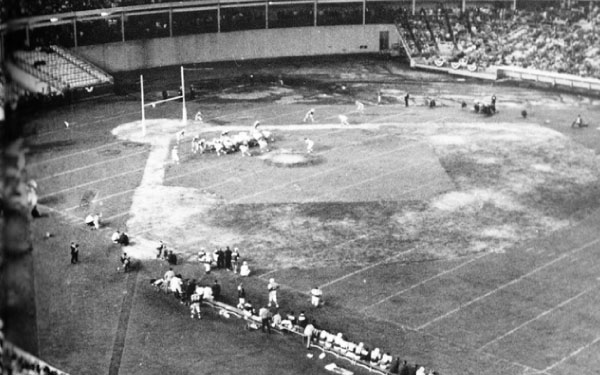 For Yankees fans, a stay at Shea was a necessary evil on the road to a new stadium. Gary Ciline was an 18-year-old Bronx Bombers fan who purchased a Sunday ticket plan for the season. “(Shea) was nothing special, it was just where we had to play while we were waiting for our new stadium to be built,” said Ciline, who attended roughly 50 Yankee games during that time. “It was definitely different. To me it was a ballpark. The old Yankee Stadium was a cathedral, it really was. Shea Stadium was not.”

When the baseball season came to an end, Shea would get double the trouble it normally experienced during the NFL campaign. That is when things really took a turn for the worse in terms of field conditions “We were able to keep it pretty good during baseball season,” Flynn remembered. “But once the football season started, forget about it. We just didn’t have time because it was every week.” Unfortunately for the fans, the quality of football was just as bad as the field conditions. For both the Jets and Giants, it was a season to forget. Legendary quarterback Joe Namath, now in his 11th season, was a shell of himself—throwing nearly twice as many interceptions as he did touchdowns—and the Jets won only one game. The only highlight was that running back John Riggins became the first Jet to rush for 1,000 yards in a season. The Giants, piloted by QB Craig Morton, did only slightly better, winning two home games during their five-win season.

One of those wins came in week 7 when 52,000 fans cheered the G-Men to a 35-24 victory over the San Diego Chargers. Among them was 16-year-old Sol Steinberg. “I was thrilled because I lived in Queens and for me to get to the Bronx to see a Giants game was very difficult,” said Steinberg, who remembers how excited he was when the team announced it was ending its short-lived tenure in Connecticut. But there were mixed emotions. “It wasn’t our home and we didn’t belong there. The best memory I have from the game was when offensive lineman John Hicks threw a block and sent one of the Chargers flying into the air,” said Steinberg, now an executive producer for FiOS News.

“I remember looking at the Giants down on the field and even though they were wearing their home blue uniforms, some- thing about it just didn’t feel right.”

As if there weren’t enough games being played, college football got into the act as well. In fact, the strangest football weekend of the season came on November 15 and 16, when Sunday’s game between the Giants and Philadelphia Eagles was preceded by a Saturday matchup between legendary coach Eddie Robinson’s Grambling State University and Norfolk State.

It was definitely a road trip to remember for Grambling sophomore quarterback Doug Williams.

“Going to play at Shea Stadium—for me—all I was thinking was that Joe Namath played here,” said Williams, who 13 years later would go on to be named the MVP of Super Bowl XXII as the quarter- back for Washington. “Coach Robinson always used to tell us that anything that was worth a damn eventually had to go through, or come from, New York.”

For Williams the trip to Shea was a personal one because he was able to play on the same field where Tommie Agee—who attended Grambling—celebrated a world championship with the Mets. “My brother had played baseball with Tommie Agee at Grambling. So for me that was big. But just being able to play in New York, and to play at Shea Stadium, was a blessing for us.”

By opening day 1976, Shea Stadium’s outfield grass had returned and the Yankees and Giants had vacated the premises. However, you only need ask Pete Flynn about that year to have a clear sense of what it was like. After pausing for a few seconds and then letting out a hearty laugh, Flynn’s honesty teels you everything you need to know. “I don’t have too many memories (from 1975) to tell you the truth,” he said. “Because I try to forget it.”