When the voice of Krishna Das resonates through a room, it’s a connection back to India, the birthplace of yoga. Whether it’s a yoga studio in the heart of Manhattan or someone’s living room in small town America, Das has brought sacred Indian chants to American yogis like none other. He was nominated for a Grammy Award in 2012 and then played at the Grammys in 2013. He’s got more than a dozen albums to his credit and he’s been dubbed the reigning rock star of the yoga world. But the clear baritone voice uttering those ancient mantras comes from a surprising source: Jeffrey Kagel, aka Krishna Das, a Jewish kid from Long Island. And although India has completely stolen his heart, he says he’ll always be a New Yorker.

Kagel, now 67, felt like something was missing in his life while he attended high school and college on Long Island. (He explained that he studied “basketball and the blues” at Stony Brook University.) Music was almost always a part of his life—he started on the trumpet in junior high school, played piano and took up the guitar as a teen- ager—but music alone didn’t fill the void for him.

For most musicians, it’s all about the music. But for Kagel, it’s not about the music at all. The music is a vehicle for something larger. When he was young and he hadn’t yet identified that “something else,” he felt empty. There was a lack of spirituality that he felt in a profound way. “Living in America at that time was terrible,” he said, “I was neurotic, frustrated and couldn’t find lasting satisfaction.” 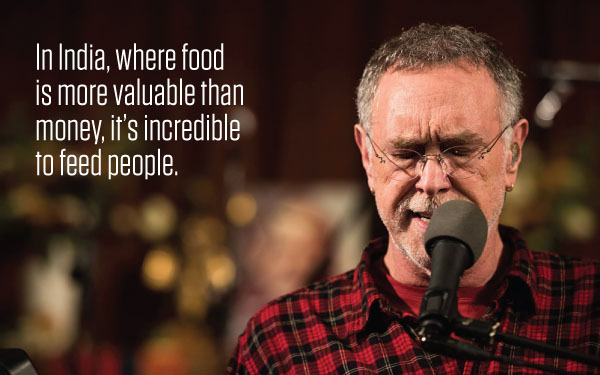 In 1968 Kagel left Stony Brook and moved near New Paltz where he drove a school bus and lived on a friend’s farm. It was the late 60s, everyone had heard about Richard Alpert and Timothy Leary and their wild experimentation with LSD at Harvard. Alpert, a western yogi, had found his guru in India, and had changed his name to Ram Dass. He was yet to write his seminal book, Be Here Now, when Kagel’s friends decided to go see him lecture, and Kagel declined to join them. “I wasn’t interested in American yogis,” he said. “I only wanted the real thing. It’s a stupid statement, but I was stupid at the time.”

Kagel remembers he had just finished milking a pair of goats when his friends returned from seeing Ram Dass. “[My friend] had this crazy look on his face, and the light shone out of him. I said, ‘Write down the directions. I’m going.’ I left within an hour and drove all night to Dass’ place. I met him and that was the beginning.”

Over the next year, Kagel got deeper into his meditation practice and traveled around the country with Dass. He spent the following summer meditating with Dass in New York, then, without any intention of ever returning, he left for India.

“It was completely life-changing. It was extraordinary to meet people who, no matter what they were doing on a daily basis, had so much spirituality in their lives. I was searching for inner peace and inner connection and it was mind blowing to be around people who had that.”

It was also in India that Kagel met Maharaj-ji, his guru. He and his traveling companions took a rickety old taxi through the mountain roads northeast of Delhi to Maharaj-ji’s temple where they were offered food. “He always fed people. Anyone who came to the temple got a full meal. In India, where food is more valuable than money, it’s incredible to feed people. He fed everyone who came to the temple and didn’t ask for anything in return.” 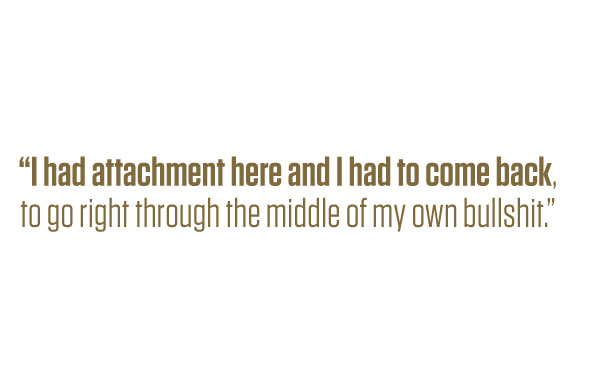 After their meal, they were led to another room to be with Maharaj-ji. There was no formal teaching. Maharaj-ji didn’t show them how to breathe or sit or slow down their minds. That’s not how it worked. “He was like the sun shining on everyone and everything equally all the time. We asked how to find God and he said to serve people. We asked how to raise kundalini [a yoga term for corporeal energy] and he said to feed people. The idea was to think of others instead of yourself.” Kagel took the name Krishna Das and started chanting as part of his spiritual practice. This branch of yoga, called Bhakti yoga, is the yoga of devotion. “But after two years, Maharaj-ji sent me back to America. He said I had attachment here and I had to come back, to go right through the middle of my own bullshit.”

Kagel had a rocky relationship with his parents and all sorts of desires he wanted fulfilled—things that had to be dealt with in America. Maharaj-ji saw that he was pushing away things from his homeland, running away and hiding. Kagel returned to the US and spent some time with his mother on Long Island and his father in New York City. But only six months after he’d left India, Maharaj-ji died. Kagel turned to music to deal with the loss and found solace not only in chanting but also from western musicians like Ray Charles, Van Morrison and Bruce Springsteen. (Kagel calls Springsteen the Bodhisattva of New Jersey.) He started visiting others who had been to India and shared similar experiences, then moved to California and started a kirtan band called Amazing Grace. He’s been playing kirtan ever since.

Playing kirtan and performing music are not the same thing. Even though there’s no disputing that Kagel/Krishna Das has been gifted with a beautiful voice and plays the harmonium deftly, he does not put on shows or entertain. “A kirtan is a spiritual, meditative practice.

And that is completely different from a concert. [Chanting] is something I share with people. When I sing, I am sharing my practice, and they are doing the practice themselves while we chant together.” This is where Kagel found the purpose of his music. He believes it was meant to take him somewhere—not to fame or fortune, but to enlightenment. Music and Bhakti yoga are the vehicles of his transcendence.

“It’s a repetition of mantras, the names of your own inner being. The practice is to repeat those names and to pay attention and have an experience of quieting down and opening up.” Kagel thinks the problem with our culture is that we’re always looking for happiness from external sources. That kind of happiness is fleeting, he believes. “Everything is changing all the time and one has to find peace of mind within.”

When he was a young man enamored with the Indian lifestyle, Kagel was struck by the spirituality of the Indian people. He saw it as a great contrast to his own existence on Long Island. But as he’s grown older and traveled farther, he’s learned that no matter where people come from, they want the same things.
“Everyone wants to be happy. The way they define that is different for everyone, but the feeling is the same inside.”

Kagel now lives in Rockland County. And as much as he’s contributed to the enlightenment of yoga practitioners across the world as Krishna Das, he’s also still a guy named Jeff Kagel who grew up on Long Island. Asked about the dichotomy, he declines to differentiate between the two personas. Did one have to die in order for the other to come alive? “Nope. It’s all the same person. Just me. They say you can take the boy out of New York but you can’t take New York out of the boy. I was formed by my experiences here and you take that with you wherever you go.”