When we called to make a reservation for a Wednesday night we were informed Krinti only accepts reservations for parties of six or more. We were advised to arrive by 6:30pm to secure a table since the restaurant begins to fill up at 7pm. Krinti, a Mediterranean grill in the Woodbury Common was the subject of that conversation. The restaurant’s representative was on target. Even on weeknights it’s not unusual to experience a wait for tables at this nearly year-old Turkish spot. It’s still hot, and deservedly so. Consistently, sometimes memorably, tasty food and exceptional service make this the Island’s most outstanding Mediterranean.

I sampled four appetizers, four entrées and four desserts and enjoyed every one of them. A tablemate who is less than keen about Mediterranean food agreed. Krinti (it means bread crumbs in Turkish) is a bright, shiny nicely appointed storefront with big windows and clean lines. A centerpiece of 10 filigreed lantern-style chandeliers dominate the dining room. A striking room divider between the bar and dining room holds candles and metal birds. All of this would mean little if the people who own and run this place didn’t know what they were doing. But they do.

The chef is Mevlüt Boyaci who previously presided at Dervish in the heart of Manhattan’s theater district. Navim Alkan, who owns Chicken Kebab in Roslyn along with his son Erol and son-in-law Andy Koksal, are Boyaci’s partners in this venture. Their modestly priced menu features superior renditions of familiar Turkish and Greek entrées like moussaka ($18), kebabs ($17 to $26.95), gyros ($17 and $18) and lamb shank ($19). Appetizers like baba ganoush ($7.50), tabouleh ($6.25), falafel ($6.50), stuffed grape leaves ($7.25) and spinach pie ($5.95) also abound. Surprisingly, despite its gently-priced food, Krinti’s wine list is pricey. The least expensive bottle of white from Crete (that was unavailable when I visited) cost $36. 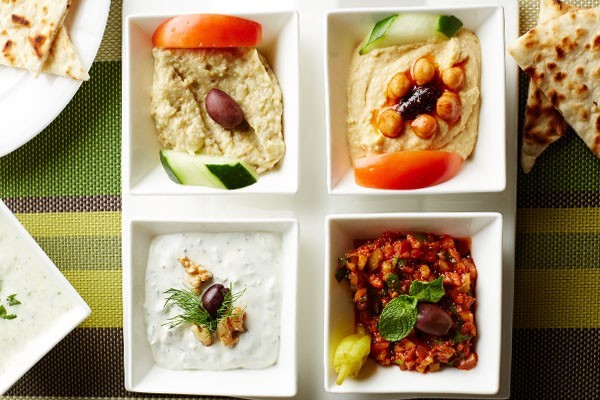 Two other appetizers worth mentioning were the four warm, soothing cigar böreks ($5.95), narrow, pan-fried filo rolls stuffed with feta cheese and mücver—tasty zucchini pancakes drizzled with yogurt sauce. A muscular, multi-layered moussaka will satisfy the hungriest of diners, while powerfully seasoned köfte kebabs ($17)—grilled minced lamb patties—produced admirable flavor. The iskender ($17) features the tenderest lamb gyro this side of Istanbul and a mild tilapia marmaris ($18.95), a filet baked in a tomato, garlic and dill sauce, is appropriate for those seeking an unthreatening fish dish.

Desserts sampled (all priced $6.95) were three super semolina cookies, baklava flown in from Turkey and chocolate pudding that features solid chocolate melted
down in Krinti’s kitchen.