The kids were unbelievably disappointed.

There isn’t much you could do, though, when a long-anticipated event gets rained out. You can rant and shake your fist at the sky but you know that’s energy wasted. The best you can do is rent a movie, re-schedule your event–and read Rain: A Natural and Cultural History by Cynthia Barnett.

Eons ago, just after Earth became more than a bit of debris flung off in the birth of the sun, water vapor got trapped in our planet’s atmosphere. Eventually, Earth’s surface cooled enough that that moisture poured down and it rained for years. That’s a good thing: without it, there would be no life here.

Early civilizations came and went with the rains. Humans moved from forest to savannah and picked up hoes, tamed livestock, and built boats. They created gods to explain where rain comes from and who ruled lightning, and just about every culture passed down a cataclysmic flood story.

Centuries ago, people learned to harness and save water, yet they could do little but dance or pray for rain to fall in times of draught. In the early 1400s, King Sejong the Great of Korea understood how to measure what fell. In the late 1500s, witches were blamed for dry spells; barometers were invented a hundred years later, and a fad for weather-watching captivated America and Europe. 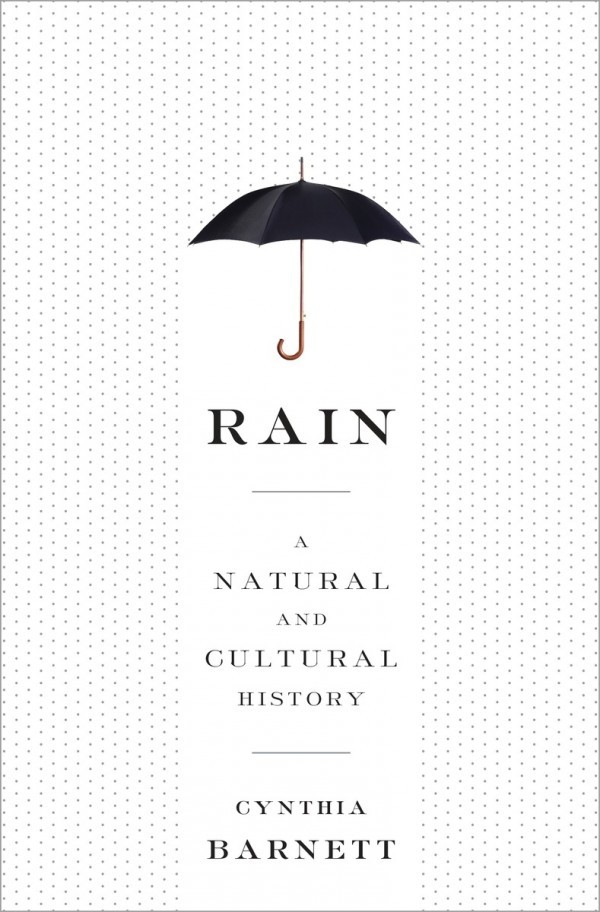 By 1802, clouds were named by a man whose father thought weather prediction was folly; later that century, rainmakers were paid fortunes to make clouds form over dry fields. Today, even though we have modern methods of predicting rain and there are thousands of local precipitation reporters around the world, meteorologists sometimes still miss storms and showers.

Even if we could tell where it was going to come down (or not), there are things about rain we tend to overlook. Doodlers get raindrop shapes all wrong, for instance. We ignore that rain has changed elections, societies, and wars. We mightn’t understand that pruny-wet fingers could be an ancient rain adaptation, or that “raining cats and dogs” isn’t what other cultures say. And we may not know that the rain falling on our faces today may have wet the faces of our most ancient ancestors.

Maybe because it’s as refreshing as its title, or maybe because it reminded me of spring, but Rain: A Natural and Cultural History made me very happy.

That stuff that falls from the sky isn’t strictly what this book is all about, though. Author Cynthia Barnett also touches upon history, biology, Earth science, global warming, and all kinds of tiny facets of culture. We’re sprinkled with delightful surprises, as well as terrifying tales of draughts and floods, then introduced to majesty on one page and destruction two pages later. That, for sure, is not all wet.

This book practically screams for weather fans to own it. It’s filled with fascinating knowledge, no matter where you live. Whether your pray for precipitation or curse it, Rain: A Natural and Cultural History is awash with goodness.