Summer on the South Shore means sandy feet and sun-kissed cheeks. When the days get longer, you can’t help but want to be outside soaking up every minute on this long stretch of beautiful beaches and lush parks.

Summer is the busy season for this beach community, there is no shortage of activity in the City by the Sea on weekends. The “bloodline” of Long Beach, as some locals describe it, is the boardwalk. The 2.2-mile boardwalk stretches from the east end to the west end of the city and is open to walkers, runners and cyclists. The Shoregasboard, a food court made up of food trucks, gives visitors numerous local options without having to leave the beach. An 18-hole mini golf course and bocce court sit next to the trucks, along with iFly Trapeze school, where kids and adults can fly through the air with the greatest of ease. 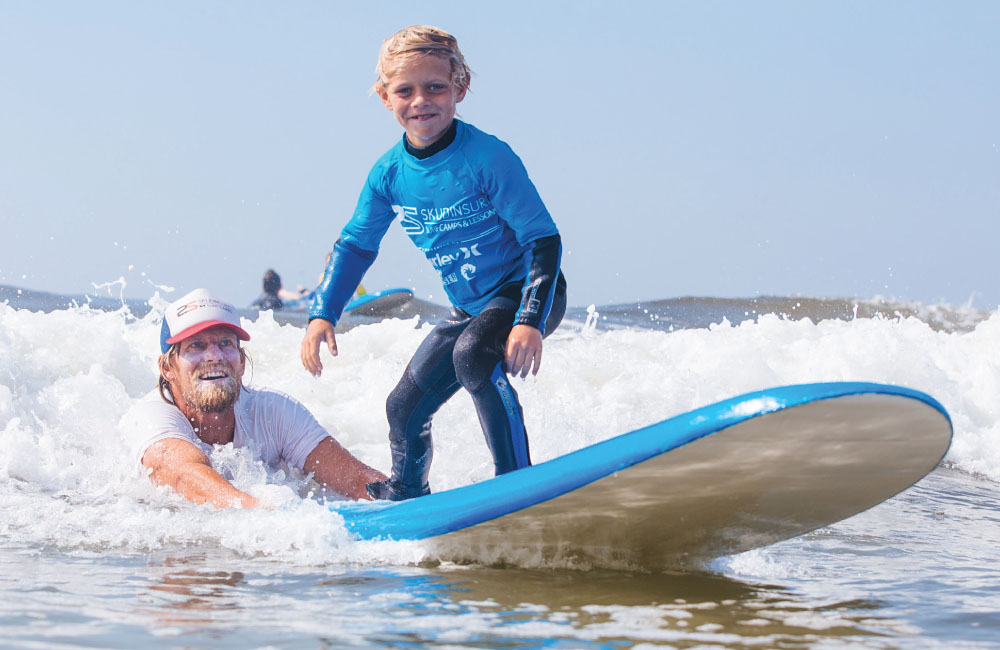 The city also hosts free beach concerts at least three times a week throughout the summer. In the central square, Kennedy Plaza, farmers and arts markets take over every Saturday. And Saturday nights are family movie nights back on the sand.
Philanthropy runs deep in Long Beach, residents and visitors look forward to annual events like the Michelle O’Neill Volleyball Tournament, which raises money for families with children undergoing cancer treatment, and Long Beach Waterfront Warriors, an organization that brings wounded soldiers and their families to town for a free vacation. 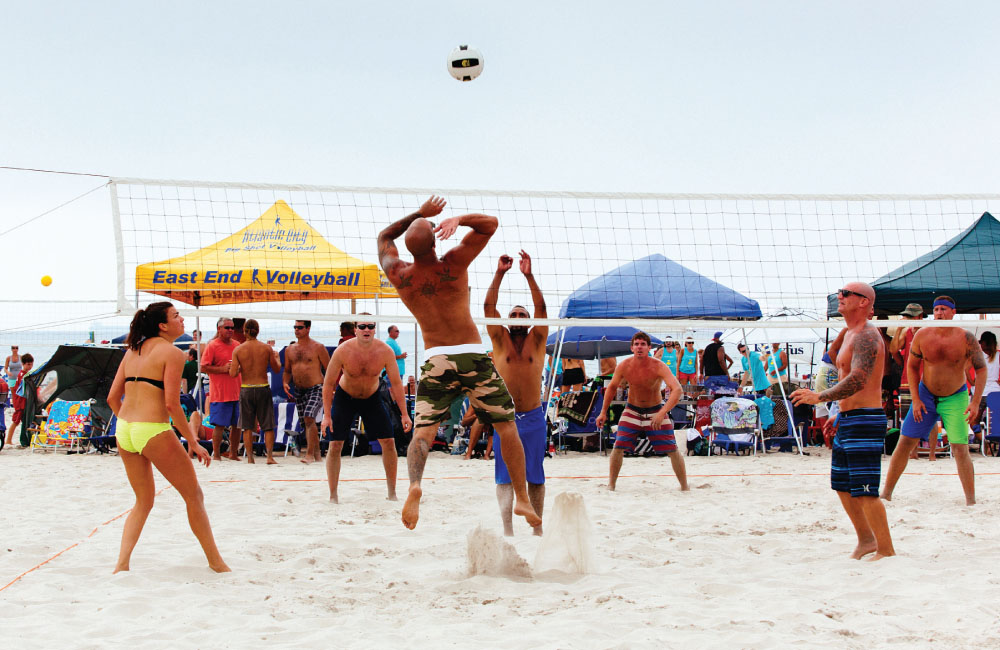 Designated surf beaches, four surf shops and a weeklong event dedicated to NY surf culture keep Long Beach true to its rep as a surf destination. Two surf schools, Skudin Surf and Surf 2 Live, are on the beach daily. Experienced instructors—some of them pros—will help you catch your first wave. Or rent a surfboard for the day from one of the many local surf shops—Unsound Surf, Long Beach Surf Shop, Maritime Surf or Moku Surf.

Long Beach also has a ton of restaurants with every style of cuisine imaginable. Jetty makes you feel like you never left the beach, with tiki bar décor and killer fish tacos. For some southern flavor, Swingbellys proves Yankees can do greay barbecue. Currywurst’s beer steins, bratwurst and picnic-table seating put you in the Oktoberfest mood any time of year and Corazon de Cuba has great mojitos and sizzling live music. Diner by the Sea’s bedazzled milkshakes come in decadent flavors like Nutella and cookies and cream and are even topped with a colorful toy. The diner also makes two very special and delicious secret sauces for their burgers. Both the Beach Burger Sauce and the Boom Boom go way beyond ketchup, mustard and mayo stirred together.

Nassau County can sometimes feel congested and miles away from nature, but Eisenhower Park does its part to dispel that feeling. What sets it apart are a variety of amenities and a dense schedule of events. For golf lovers, the park has three public courses, one PGA course that is lauded as among the best on the Island. A driving range and mini golf course are also on the grounds.

Batting cages are a fun way to relive the Little League years. The Long Island Road Runners Club hosts about 60 races a year in the park and also holds a kids’ ½-mile fun run and a 5k race every Wednesday night. The races are open to nonmembers and cost just $11 to enter. Eisenhower is also home to a number of staged events including concerts, movie screenings and international nights. The park’s Lakeside Concert Series features tribute and original bands playing disco, oldies, country and rock.

The series includes the Fresh in the Park concert that has brought in big name artists like Tegan and Sara and Sara Bareilles in recent years. International Music Night is a series that celebrates the music and culture of various nationalities. And Family Movie Nights bring classic family films like Princess Bride, The Wizard of Oz and Sandlot to the masses with free screenings on the grass. Schedules were not available at time of printing, but easy enough to find at the park’s website. 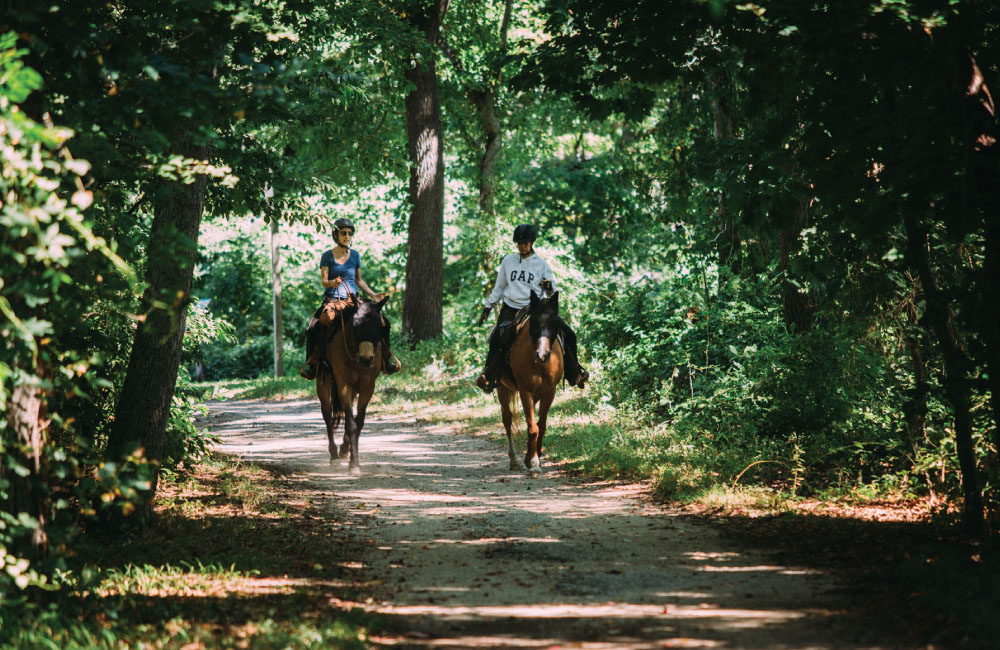 Nestled between highways in an unlikely locale is another hidden gem. The park, situated along Nassau County’s largest lake, features trails for hiking and horseback riding, picnic areas, playgrounds and tennis and basketball courts. The lake and surrounding ponds are stocked with trout and are open for fishing year round. It’s also dog friendly; fido can run off his leash in certain areas. And there are kids’ events—like juggling performances and magic shows— throughout the summer. Since it’s a state park, an Empire Passport gets you entrance into the parking lots without a fee.