Perhaps the most celebrated corner of Long Island, visitors from all over flock to the Hamptons in the summer to get a taste of the glamour. But locals know there’s more to the East End than pristine beaches, lavish estates and designer shopping. Not that we need more, but for those who want it… 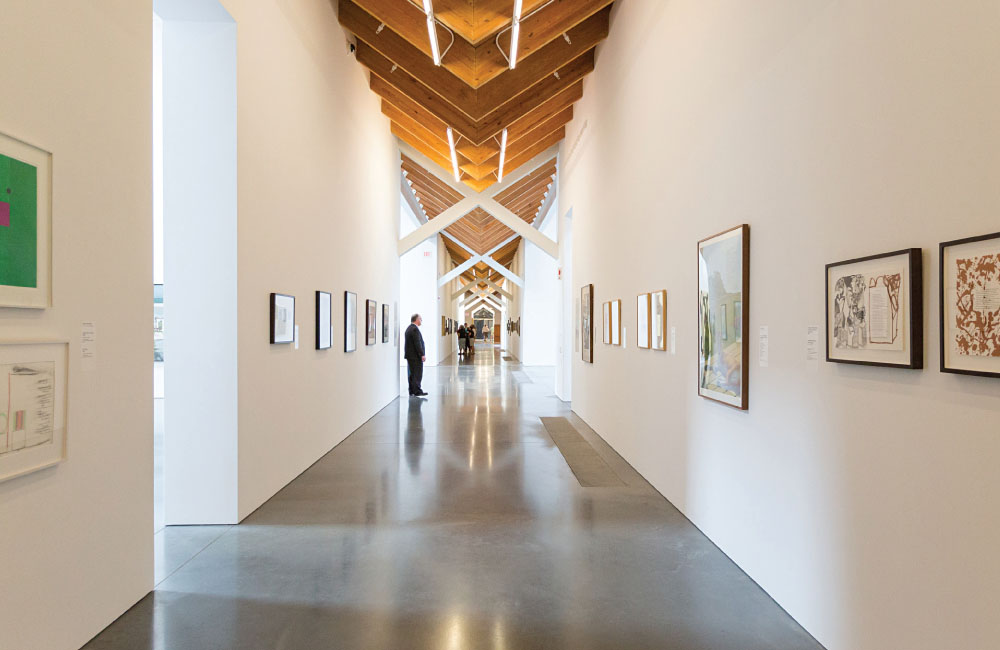 A classic art institution with an inviting atmosphere, Parrish Art Museum in Water Mill is a must-see. Though the museum was founded in 1891, its new facility—a modern, minimalist opened only 3 years ago. A permanent gallery pays homage to a healthy tradition of artists with local ties like Lee Krasner, Esteban Vincente, Willem de Kooning and Roy Lichtenstein. Parrish also offers numerous educational and cultural programs. Painting, drawing and photography workshops, yoga classes on the museum’s terrace, guided tours, film screenings and kids’ art and stop motion animation camps can all be found. The lineup is being added to constantly, but easily followed at parrishart.org. 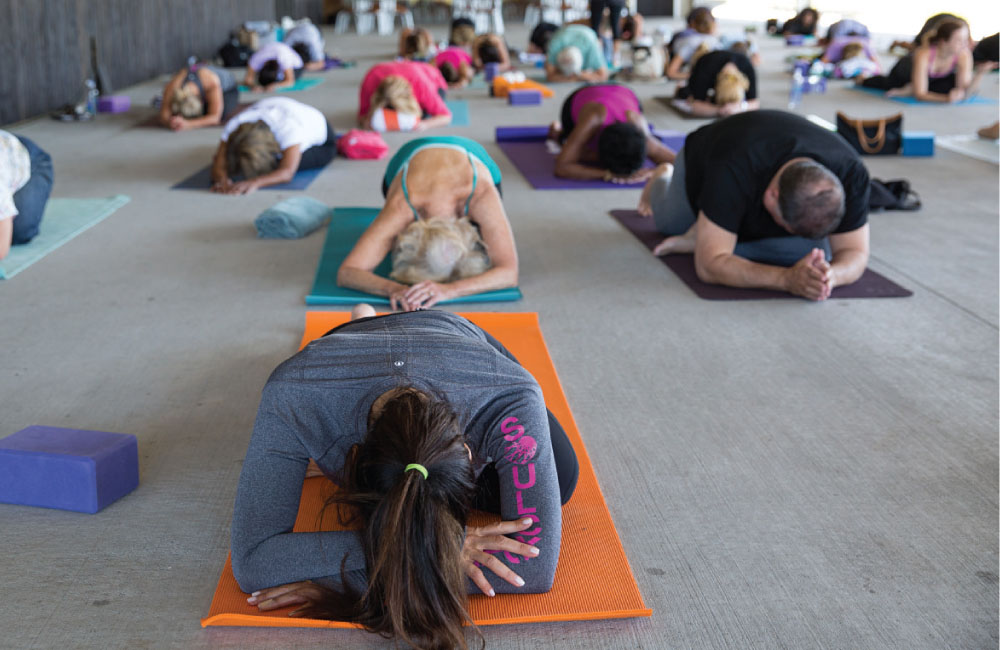 Yoga at The Parrish Art Museum

East Hampton is a hotspot for art and culture, while also being home to beautiful beaches, trails and waterways.

LongHouse Reserve is a refuge that blends nature and art. The 16-acre facility features a multitude of shrubbery and flowers that are indigenous to the East End climate. Artfully landscaped, areas like the Red Garden adhere to a strict design theme. Sculptures of stone, ceramic and glass are interspersed throughout the reserve, including an original piece by Yoko Ono. (Rumor has it the piece caused controversy among the pre-existing sculptures.) For something funkier, Robert Wilson’s Watermill Center is a playground for creative spirits. This summer’s gala (held in July) celebrates a Circus of Stillness and there’s no telling who will show up. Luminaries from the worlds of art, theater and entertainment lend their names and support to WC’s mission of providing artist-inresidencies at this unspoiled retreat.

The non-profit East Hampton Trails Preservation Society runs guided hikes of area pathways, which they also maintain. For those who wish to go it alone, the group supplies maps in exchange for a small donation. 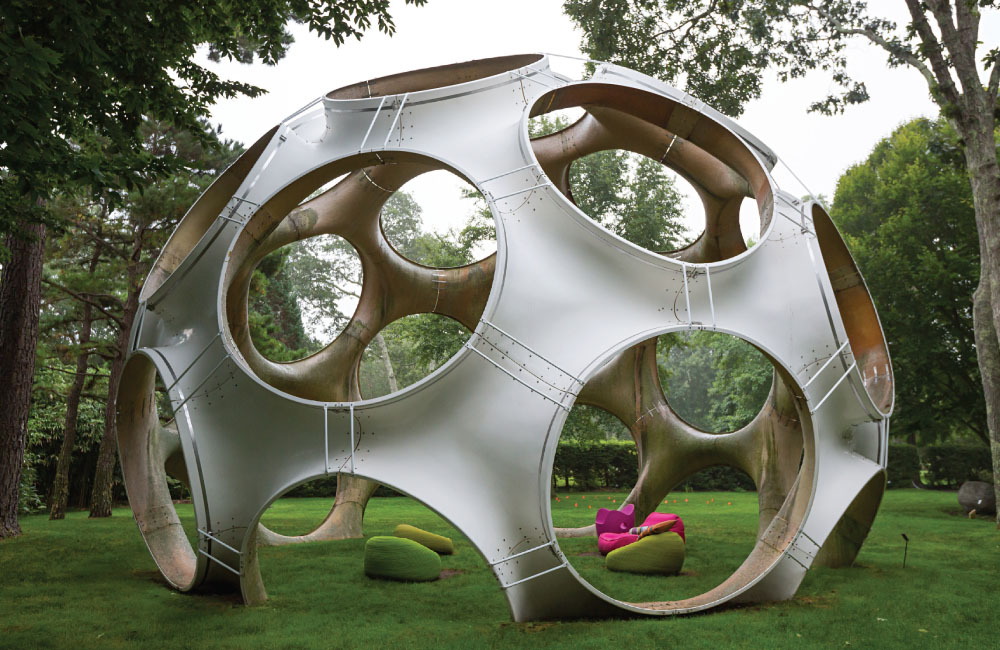 Pollock Krasner House & Study Center was once the home and studio of famed American artist Jackson Pollock and his wife Lee Krasner. The couple set up shop in East Hampton in the mid-1940s, moving there from New York City. Donated to the public by Krasner in her will, the house and accompanying barn, which overlooks the blue waters of Accabonac Harbor, now serves as a museum and art research library, staging various shows and cultural events throughout the summer. The floor of Pollock’s studio is lacquered with his paint drippings, a fortunate consequence of his signature style.

In the heart of the town, Guild Hall brings a variety of shows to the stage, from discussions with David Sedaris and Anthony Bourdain to documentary screenings, musical and dance performances and readings by well-known authors. The museum houses GH’s collection of visual arts and exhibits. And the celebs aren’t just onstage. You never know who you’ll wind up rubbing elbows with—the theatre draws the entertainment elite.

Georgica Pond is a great alternative to the crowded beaches. Main Beach Surf and Sport offers kayak rentals enabling visitors to glimpse East Hampton from an entirely new angle. The store also runs guided full moon paddles for those who want to watch the sunset from the water and paddle back under the stars. East Hampton’s Paddle Diva knows how to make even the most novice SUP-er feel SUPer. Founder Gina Bradley takes stand up paddleboarding to the next level, offering fitness classes and paddleboard yoga in Three Mile Harbor. 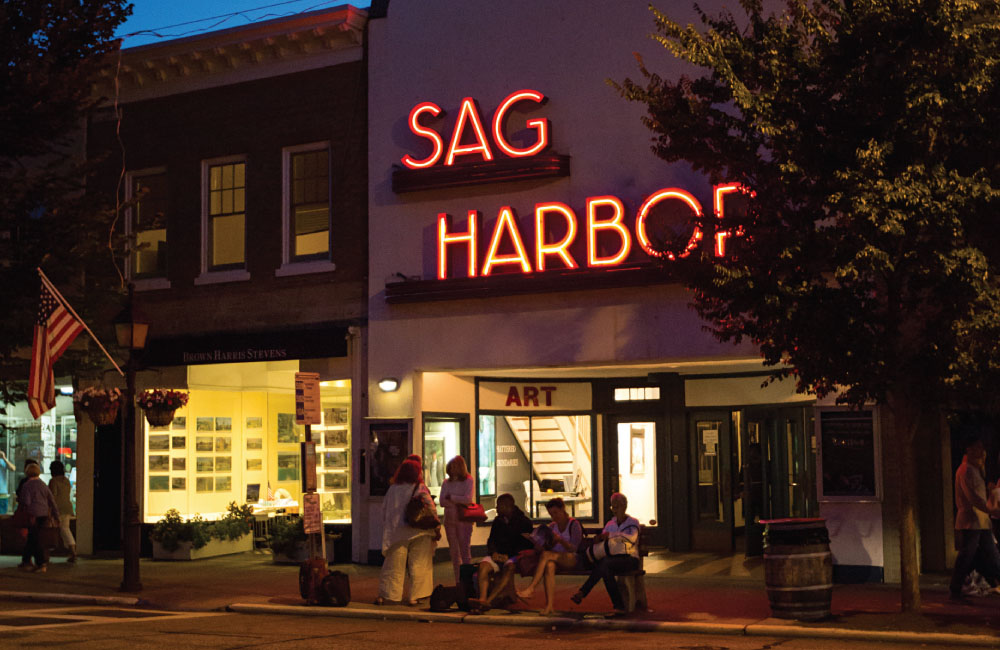 A small, unique village that spans only two square miles, Sag Harbor distances itself from the glitzy reputation of its neighbors. The historic whaling town was once a port that rivaled Manhattan in the late 1700s and early 1800s. Now, visitors are drawn to the shops, restaurants and scenery that give this coastal town its character.

Dock House is a signature Sag Harbor restaurant; a laid-back, casual seafood joint on the water that stores its live lobsters not in a tank, but in an antique, clawfoot bathtub. Locals go crazy for Estia’s Little Kitchen Mexican-influenced fare made from ingredients pulled from its own garden. Rows of lush greens yield typical produce, like carrot and snap peas, along with exotics like green zebra tomatoes and sunburst squash. They even harvest their own quinoa. But most agree a night that ends anywhere starts with cocktails at sunset on the porch at The American Hotel.

Down at the Waterfront Marina, which houses the iconic windmill, visitors can charter a sailboat for the day to better explore Gardiners Bay. Anchor and go for a dip or enjoy a catered lunch onboard. For those more inclined to watch than work, weekly regattas are a social event that welcomes friends and friends of friends.