Image: The Residence Tunis in the city’s chic Gammarth district is the most luxurious hotel in Tunisia.

Its balmy climate has attracted visitors for centuries, as have the delicious cuisine, friendly inhabitants and beautiful scenery. The location of a vast repository of ancient ruins and archeological sites, this prize holding of the Roman Empire retains its allure even into the 21st century. This is not Italy however, it is Tunisia. Located less than a hundred miles west (not south) of Sicily, Tunisia was a jewel of Roman civilization. Today, the empire’s vestiges make Africa’s northernmost country one of the world’s most surprising destinations. 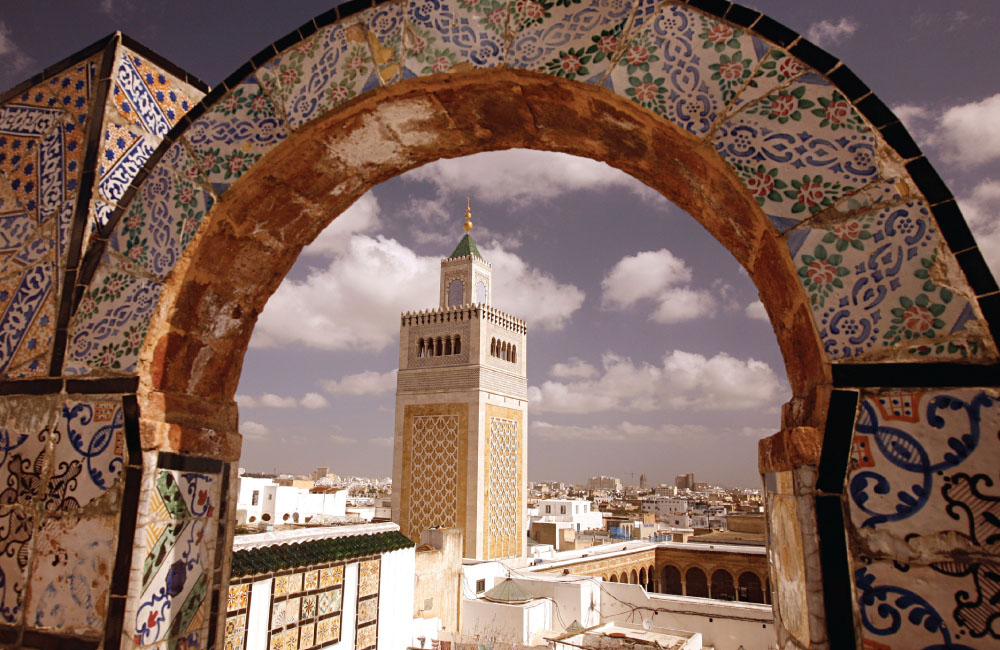 Location, Location, Location
The Romans were not the first society, nor the last, to covet Tunisia, a land well situated for military and commercial activity in the Mediterranean region. Preceding them were the Phoenicians, and following them were the Vandals, who did what vandals do and wreaked havoc and destruction everywhere they went. Traces of Tunisia’s time as part of the Ottoman Empire are still visible, especially in the octagonal shape of Ottoman-built minarets. More recently, the French had a noticeable impact, influencing the architecture of Tunis’ La Ville Nouvelle, a modern neighborhood and center of commerce and government.

An overview of Tunisian history is found only a few miles from the center of Tunis in what remains of the ancient city of Carthage. Seen from the top of Byrsa Hill which, in addition to the many stone foundations, is the location of both the Carthage National Museum and the Acropolium exhibition space in the deconsecrated Saint Louis Cathedral, the smart design of the Punic Port highlights the forward thinking employed to protect the strategically valuable harbor from invasion.

Carthage is by no means a forgotten repository of ruins. On the contrary, it is the most desirable residential neighborhood in Tunis where large mansions stand against backdrops of lush bougainvillea. The houses and gardens of Sidi Bou Saïd, right next to Carthage, are even more spectacular. One of the most beautiful villages in the Mediterranean, Sidi Bou Saïd’s distinctive style—chalk white walls and domes offset by sapphire fencing, windows and doors—can be attributed to the Andalusian Muslims who settled here after being forced to leave Spain during the Inquisition; they found safe harbor on a bluff with spectacular views of the sea.

Linked to Tunis by a light-rail line, Sidi Bou Saïd nevertheless remains worlds away from urban life. Now a UNESCO World Heritage Site along with Carthage, the village was declared a place of historical significance in 1915, becoming the first place in the world to have such protected status. Views of the sea are seen from everywhere in town, including the impressive Dar Ennejma Ezzahra, a superb building which is now a museum as well as the headquarters of the Center For Arab and Mediterranean Music.

Another interesting sight is Dar el-Annabi, like Dar Ennejma Ezzahra, a private home. This one however, is still partly occupied by its owner; most of the house, including an expansive rooftop terrace, is open to the public and is well worth a visit. 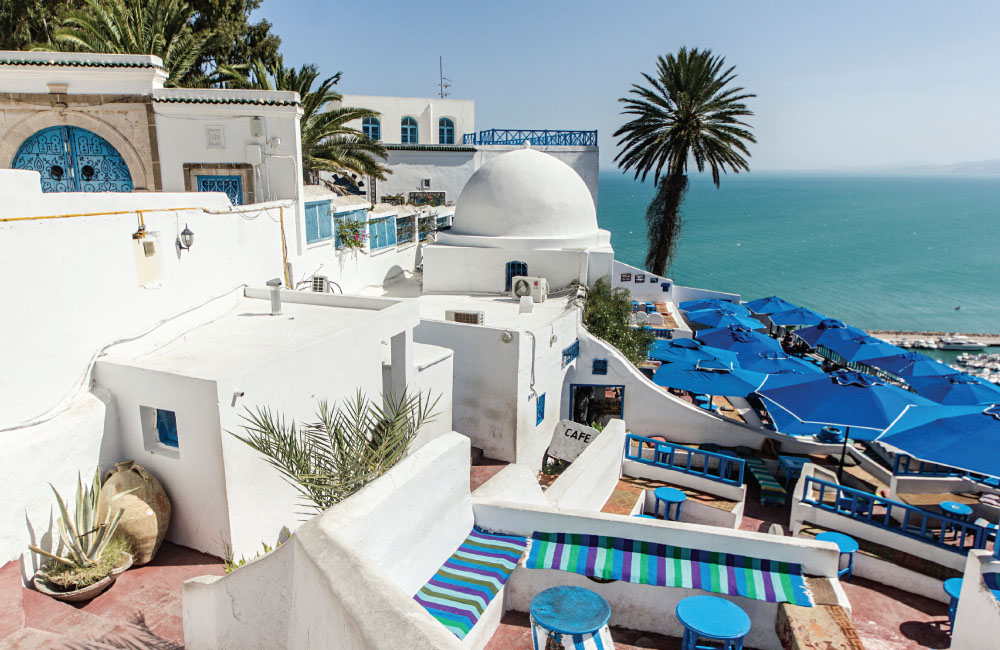 The Bigger Pictures
The impressive Bardo Museum, undoubtedly the single most important attraction in Tunis, is home to the largest and best collection of ancient Roman mosaics in the world. Why here and not Italy? As the wealthy do today, ancient Romans could pick and choose where they lived. Tunisia’s agreeable climate, picturesque landscapes and abundant materials for the construction of fine homes made towns such as Bulla Regia, Dougga and El Jem thrive during the imperial era.

Fashionable houses built for the upper classes were decorated with intricate mosaics portraying scenes rather than the simpler geometric patterns typical of less affluent residences. After the decline of the Roman Empire, the houses were abandoned to the sands of time, literally and figuratively, and many of the mosaics were eventually covered by layers of sand that shielded them from erosion and exposure to the elements.

Elsewhere in Tunisia are numerous sites dating to antiquity, open to the public yet virtually deserted Dougga is among the largest ancient Roman towns in the world. A two-hour drive from Tunis, this site is famous for its Capitol and its amphitheater, still in use to this day for an annual drama festival in August. Dougga makes a worthwhile daytrip from Tunis and can be combined with Bulla Regia, the location of subterranean villas and the origin of the best mosaics relocated to the Bardo Museum. (Those left in situ in Bulla Regia’s villas provide the opportunity to see mosaics in their original settings.) 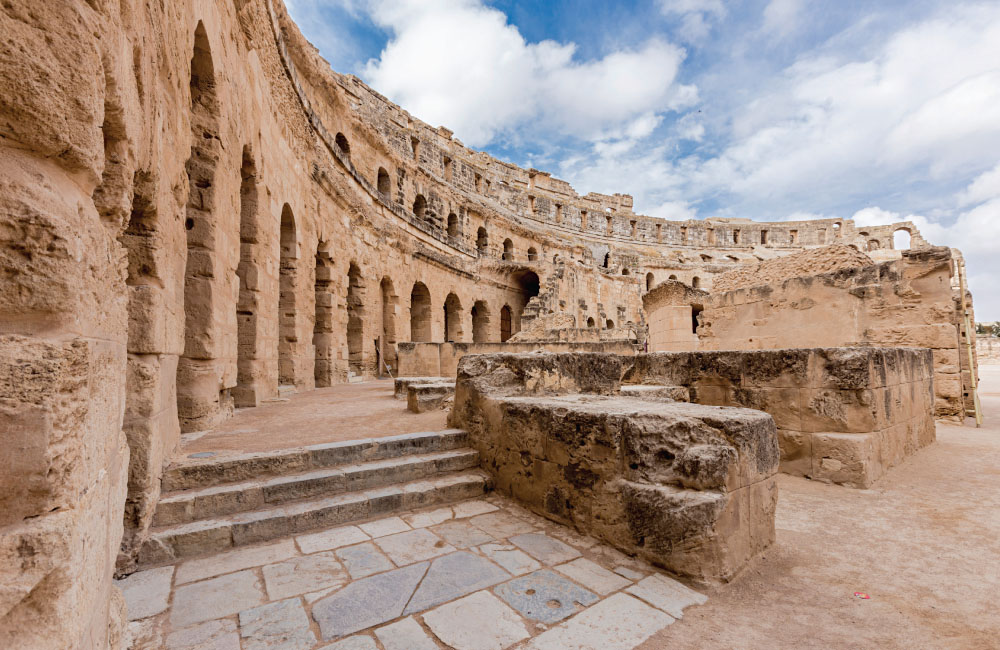 Image: The ancient colosseum at El Jem is the third-largest amphitheater left over from the Roman Empire.

El Jem, the location of a remarkably well-preserved amphitheater, is another option. The third-largest amphitheater in the Roman Empire (after those in Rome and Capua), the impressive structure is still in use today as the venue for the annual El Jem International Symphonic Music Festival.

A bit further west is the bastion city of Le Kef. Set on a plateau 2,500 feet above a sweeping plain, Le Kef’s kasbah, a (former) fort situated on the town’s highest point, is the main attraction. Le Kef makes an ideal base for exploring the Roman sites in the west of the country, which include Haïdra and Sbeitla in addition to Dougga and Bulla Regia. Thanks to its strategic location, Le Kef has been continuously occupied for 2,500 years by every civilization from the Carthaginians and Romans to the Arabs, Ottomans, Jews and French. Outside the town is a country manor, Dar Chennoufi, where the lady of the house, Madame Raoudha, welcomes guests to stay overnight and enjoy her collections of curious artifacts and books. 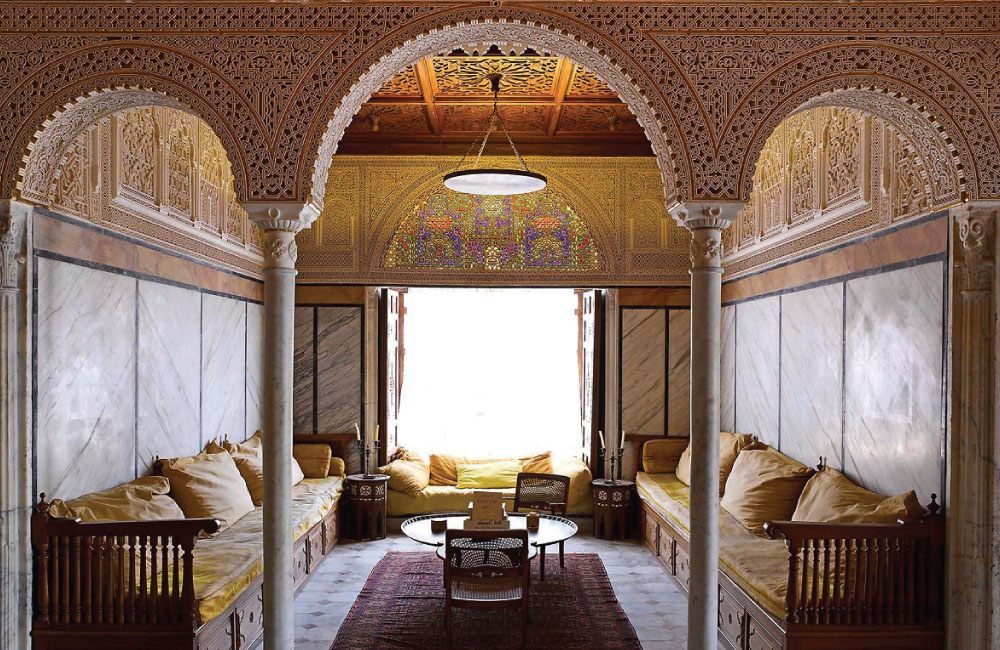 A Unique Identity
The Tunis medina is not Marrakesh and doesn’t necessarily seek to emulate Morocco’s most visited city, yet it is a charming place where authenticity prevails. The medina is undergoing gentrification as old mansions are converted into smart guesthouses and young Tunisian entrepreneurs open boutiques in the narrow lanes surrounding the souks, which remain the hub of the city’s retail activity.

Rue Sidi Ben Arous is the most sophisticated of the renovated streets in the medina. Diwan is a bookshop with books about art, culture and architecture in French and English; further along is la Maison du Parfumeur, where orange flower and cactus (the not-so-secret ingredient in Chanel No. 5) are held before being shipped to Europe.

Label Olive, whose name is a play on words in French for The Beautiful Olive (la belle olive), is a store dedicated to olive oil. Across the street, a silversmith carries on the work of his ancestors. The fragrances of sandalwood, rosewater, fresh bread and flowers commingle with those of garlic, drains and a working tannery to provide an olfactory experience that affirms traditional life continues in the medina as it has for hundreds of years.

In stark contrast to this working neighborhood are the ornate rooms of Dar Lasram Palace, which showcases both the work of artisans who created a glorious architectural legacy and the organization that maintains it. Currently the headquarters of the historical trust supervising conservation of the medina’s cultural patrimony, Dar Lasram is one of many grand buildings whose simple façades belie a rich interior. Much like Tunisians and Tunisia itself, an austere exterior can camouflage a wealth of cultural treasures within.

Tunisia Today
Tunisia doesn’t get much press coverage in world media because things are on the right track and therefore unexciting in the eyes of global news organizations. But it was in Tunisia that the Arab Spring began in 2011, and while other countries in the region are still in turmoil, Tunisians are working assiduously to establish democracy and improve the country’s economy. Tunisia is (for Westerners) a surprisingly multicultural society where people have lived together for millennia.

Also surprising to most visitors is the Jewish presence in this predominantly Muslim country. Jews have lived in this part of the world since ancient times and their legacy is still seen today, not least in the Bardo Museum’s Judaica Room where a beautifully preserved Torah is the main attraction. The beautiful Art Deco synagogue in Tunis is one of several in the city, though Tunisia’s most famous Jewish community is on the island of Djerba to the south. As for Christianity, the imposing Cathedral of Saint Vincent de Paul occupies a prominent location on Avenue de France, the main thoroughfare in Tunis’ modern Ville Nouvelle district.