Thirty-five years after the release of debut album In the Heat of the Night, Pat Benatar and guitarist/producer/husband Neil “Spyder” Giraldo are still making music together. In celebration of the latest milestone, the four-time Grammy winners released the live CD/DVD set Pat Benatar & Neil Giraldo: The 35th Anniversary Tour, which was recorded at The Paramount in Huntington. Along with classic hits like “Heartbreaker,” “Hit Me with Your Best Shot, “Shadows of the Night” and “Love is a Battlefield,” the track list includes 1981’s “Promises in the Dark,” the first song the couple wrote about their own relationship. A song that was a little “awkward” to play in the beginning, “Promises” has become one of their favorites to perform live.

What inspired all the battle-themed songs in Benatar’s repertoire? “All of the ‘angry’ songs were a combination of past relationships, observations of others and general angst,” said the Long Island-bred rocker.

Born in Brooklyn and raised in Lindenhurst, Patricia Andrzejewski was devoted to her craft from a young age. The daughter of a sheet-metal foreman and a trained opera singer, Benatar was steered away from activities like cheerleading by her high school choir teacher, Georgia Ruel. “She made it very clear,” said Benatar of her mentor: “‘Do you want to be a great singer or scream your guts out in a short skirt? Pick.’”

A mezzo-soprano with a rare four octave vocal range, Benatar studied classical music and was destined for Juilliard. But the stubborn 19-year-old decided to move to Virginia when her fiancé, high school sweetheart Dennis Benatar, was drafted. After a few years of working in a bank and singing cabaret in Richmond with local bands, Benatar had an epiphany in 1975: “My friends had bought tickets to see Liza Minnelli at the Richmond Coliseum. When Liza came out, the place went crazy! She started singing and I said, ‘I can do this.’ That was it. One second and everything became clear. I quit the band the next day and headed to New York.”

Singing mainly torch songs at Manhattan clubs like Catch a Rising Star, Benatar landed a manager and eventually signed with Chrysalis Records in 1978. She was determined to sing more like Mick Jagger than Julie Andrews—and look less like Gidget. “What I really wanted to do was be the female version of Robert Plant. But I didn’t sound like a rocker and I looked like a nice girl from Long Island. Inside was a relentless, rebellious, aggressive female ready to explode.”

After developing a tough, yet sexy, image with tights, boots and heavy eyeliner (inspired in part by the sci-fi film Cat-Women of the Moon), Benatar started working with session musicians, including Paul Shaffer, in the studio. But she felt the music was too pop-oriented and yearned for a partnership like that of Jagger and Richards: “The sound I heard in my head was raucous, with hard-driving guitars speeding everything forward,” said Benatar in her 2010 memoir, Between a Heart and a Rock Place. “But I had no idea how to make that visceral, intense sound happen.”

Then renowned producer Mike Chapman, who also worked with female forces Debbie Harry and Tina Turner, brought in a young guitarist named Neil Giraldo. As the story goes, Benatar had her back to Giraldo and when she turned around to meet him, her heart stopped. “Honestly, I was completely in lust with everything about him,” said Benatar, laughing. “But his playing sealed it. I actually said to myself, ‘There you are.’”

A multi-instrumentalist who had played with Rick Derringer, Giraldo grew up playing Italian songs in Cleveland until an uncle turned him on to the blues and British guitar-driven bands like the Kinks and the Rolling Stones. “I had always dreamt of finding a great singer and forming a rock band,” said Giraldo. “I just never thought it would be with a girl!” He was shocked when he heard his future wife’s “one-of-a-kind, God-given voice” and a lasting partnership was born. 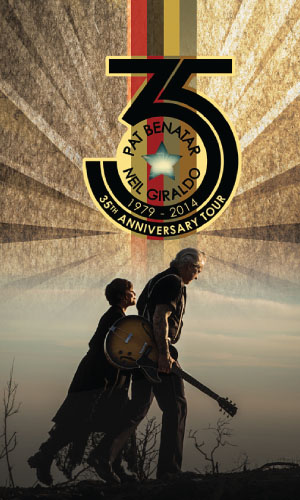 Giraldo played many roles in the band—musical director, songwriter, arranger, producer—but he’s most known as the aggressive lead guitarist that developed Benatar’s sound. Avoiding the typical synth-heavy 80s production, their first four records contained guitar-driven rock with piercing solos on songs like “Precious Time” and “Promises in the Dark.” “I always looked at guitar solos as melody extensions,” said Giraldo, who learned to play by ear. “They can continue to hold the listener’s attention when the vocal stops.”

One of the biggest attention-getters was the band’s video for “You Better Run,” which was the second music video to ever appear on MTV when the network debuted in August of 1981. Benatar’s fearless alter ego was on full display as the petite powerhouse strutted across the stage staring down the camera to let her deceitful lover know he better not show his face again. A week after the video aired for this song from their 1980s multiplatinum Crimes of Passion, the bandmates’ lives changed forever. “The exposure was so wide with twenty-four-hour, around-the-clock rotation,” recalled Giraldo. “It made it nearly impossible to go anywhere without being recognized.”

Benatar’s classical training has allowed her voice to get richer over time, leaving her more than capable of singing both ballads and hard rockers. While she doesn’t miss filming videos or the industry sexism she encountered as a female rock pioneer, she still finds the shared experience of touring seductive. The now-California-based parents of daughters Haley and Hana will continue the Benatar-Giraldo 35th anniversary tour throughout August. They also have some songs, novels and TV specials in the works. The power duo still finds the time to visit Benatar’s old stomping grounds, where they performed at a benefit for Sandy relief in 2013.

“Spyder loves where I grew up,” said Benatar. “It’s such a departure from his childhood. So we sneak back to the South Shore to visit my godmother and all of my crazy Irish/Polish cousins several times a year.”