“Everyone hated me on this movie,” laughs Charlize Theron, glancing at a photograph of herself as Imperator Furiosa, a shaven-headed, one-armed warrior in George Miller’s highly anticipated new installment of his legendary Mad Max films.

“We were going to make this movie several times and every time there was a whole different look and finally I called George and said, ‘I need to buzz my head.’ Then of course everybody hated me because it set the tone for the film – so about a thousand guys and girls had to shave their heads and the guys were worse about it than the girls.”

Mad Max: Fury Road was filmed over eight months in the scorching desert outside Swakopmund, Namibia. A new mother at the time, there was no way Theron was going to leave her infant son, Jackson, behind and thus he became something of a mascot on set, adored by his mother’s co-stars Riley Keough and Rosie Huntington-Whiteley.

“He was just under three months old when we went out there, a tiny little nugget. The girls passed him around like a little love-ball all day. They’d put him on the lunch table and he would just sit in the middle watching them eat, drooling over all the girls. And I’d be thinking, ‘that’s my boy!'”

I first met Theron 17 years ago when she was a newbie in Hollywood, promoting her first big-budget movie, Mighty Joe Young. Expecting to meet the latest in a conveyer belt of starlets, instead I found a confident and outspoken young woman who refused pigeonholing.

On the brink of turning 40, Theron is still that girl in some respects, still demanding to be heard and refusing to suffer fools. She is one of a handful of actresses who exude a real power, from her roles as a wicked queen in Snow White and The Huntsman or a female-rights pioneer in North Country to her unflinching, Oscar-winning performance as a serial killer in Monster.

She has met a match in the fiery Sean Penn, 54, whom she began dating 18 months ago, two years after she adopted Jackson, who is now three-and-a-half years old. The couple have been friends for almost 20 years, even collecting their Oscars – his for Mystic River – on the same night in 2004. As she told Esquire: “He’s hot. How do you say that in an interview? You’re a 40-year-old woman sounding like a 16-year-old.” Last year they collaborated on the human rights drama The Last Face.

As much as their shared careers, the couple have found common ground in their passion for humanitarian work. Penn has his Haiti relief mission and Theron her own organization devoted to raising Aids awareness in Africa. Politically informed, she can hold forth on any given issue.

The tough, ice-cool blonde that Theron presents to the world, is at odds with her real persona. “I don’t think of myself as tough,” she admits. “But there’s something in my personality that likes a challenge and can cope in tough circumstances. I wanna believe if push came to shove I would pull it together and survive?”

She trained hard for her role as Furiosa. 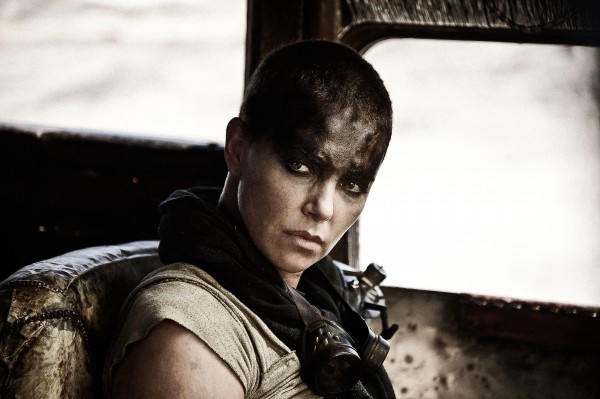 “I wanted to look like I had tremendous upper-body strength because there was so much physicality in the movie, especially with someone like Tom Hardy.”

She has a deep admiration for her co-star Hardy, who shoulders the burden of the film’s success more than anyone, possibly even more than its creator Miller.

“George has a real love for women. I really felt it in this movie and, selfishly, I feel like us women had the great pleasure of being supremely complex.”

She was happy to see the tables turn on the Mad Max set, with her male co-stars spending more time in the make-up trailer than she had to. “Nicholas had all these prosthetics and paint every day but I just had to look mucky, smearing grease on my forehead and buzzing my head.”

She refused to revisit the original Mad Max films prior to filming, and has never met Mel Gibson in all her red-carpet years. “I didn’t want to see the films again because then you’re sitting in the rig going, ‘oh my God am I being Tina Turner right now?'”

Next she next stars in Dark Places, adapted from Gone Girl author Gillian Flynn’s novel, which she also produced. She snapped up the film rights to Susanna Kaysen’s Brain on Fire, too, casting Dakota Fanning as the young journalist.

“I figured out a long time ago, that if I wasn’t being offered the roles I wanted, then I should do something about that,” said the actress whose Los Angeles-based company, Denver and Delilah Productions, is fast gaining clout. “I’ve hired the most talented people in their fields and it’s just sort of grown so now there’s a TV and a literary division. I like going to work each day.”