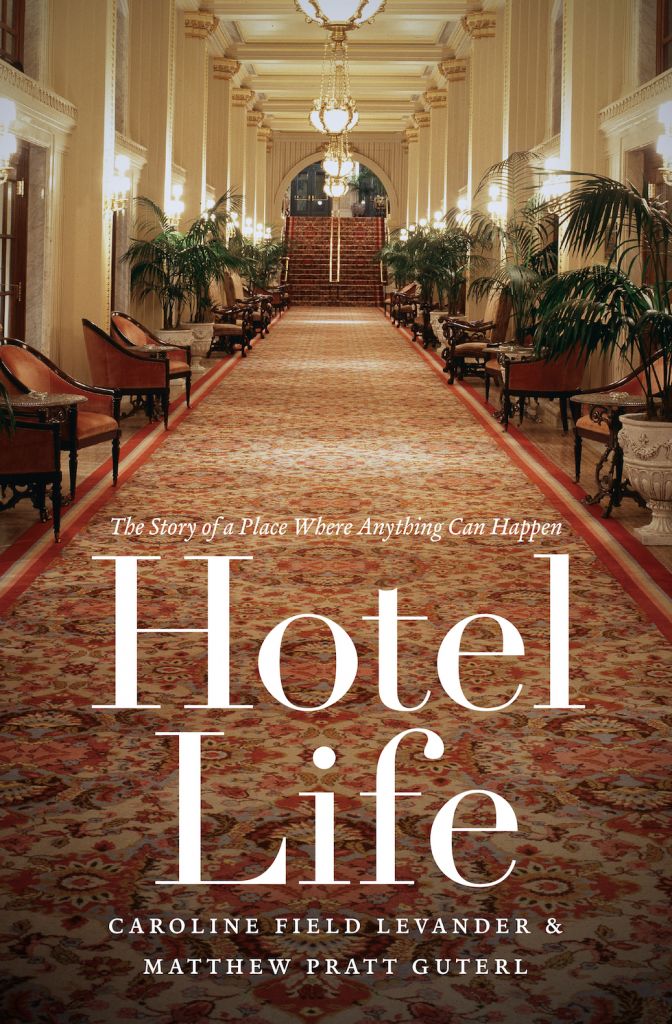 Your reservations have been made.

In today’s business environment, a work-trip is a treat and you’re determined to make the most of this one. Booking a nice hotel was the first step but, aside from amenities, did you ever consider the hotel itself?  Or the industry as a whole?  Read Hotel Life by Caroline Field Levander & Matthew Pratt Guterl, and you will…

Though travelers throughout the ages have certainly needed places to stay, the word “hotel” didn’t enter the general lexicon until 1827 when the world’s largest (at the time) one opened in Boston . From then on, hotels became a home-away-from-home for weary journeyers – and more.

Because of their public nature, hotels have played a part in history and language. As early as 1875, the hotel was “the battleground” for Civil Rights. At about this same time, the hotel lobby became a political verb, thanks to U.S. Grant, who “found himself besieged” by “lobbyists” at Washington ’s Willard Hotel.

With a nudge and a wink, the authors also remind us that hotels are intensely private. No one needs to know that you paid extra for the “Kama Sutra Essential Love Package” or that the hotel you frequent will “feed you, get you drunk, introduce you to strangers… and wake you up to start it all over again.”

But hotels aren’t just for travelers. In the early part of the last century, they could be part of a hospital for the elderly and ailing who had nowhere else to go; on that note, today’s spa hotels hope to keep you healthy or make you more so. But death is also “ubiquitous”; often seen as a last stop for the desperate, a hotel can be the site for suicide, murder, and accidents.

Sadly, celebrities are not immune to this aspect of hotel life.

In this book, you’ll see how Donald Trump angered Eloise. You’ll see which city’s hotels are known for having high suicide rates. You’ll find out how fabulous amenities can raise the roofs (literally) and how one celeb hopes to change hotels for the poor, you’ll read an eye-opening look at SROs, and you’ll learn where you never want to book a room.

I had definite mixed feelings about Hotel Life.

On one hand, it’s a good, fun read. Authors Caroline Field Levander & Matthew Pratt Guterl do a great job entertaining their readers with gossipy tidbits, jaw-dropping information, and little-known insider facts. That gives this book almost a beachy-read feel when you’re in the midst of those pages.

But when you’re not, Hotel Life is awfully high-brow. Readers who might enjoy the lighter parts have to endure PhD-speak, lengthy references to old movies, and the occasional scholarly architectural psychology. That’s not detrimental – there’s info to glean here – but it hardly matches the other bits of this book.

Overall, I think this is a dream-read for new hoteliers or concierges. It might be something to pick up, if you’re the curious sort and want something interesting and different. But wholeheartedly recommending Hotel Life?  I have my reservations…