Spending the weekend in the Hamptons, and looking for a ride back home? Want a tip? Don’t call an Uber.

As of Friday, June 5, towns from East Hampton to Montauk banned the use of Uber. The Hamptons are well known for their party lifestyles, but it looks like visitors will have to start catching taxis back to home.

A new rule the East Hampton town board passed requires every individual driver to register a business licensed in their own name.  Not only must they have the business registered but they must also maintain a physical business office in East Hampton. If a driver does not have an office in the area, they are no longer allowed to operate there.

According to 27 East, within the past two weeks local police and enforcement officers cited more than two dozen violations for Uber drivers. Most of the violations occurred in Montauk.

Uber said the requirement to have a physical business for each of its drivers is impossible and in and email to customers asked for support to change the law including sending emails explaining to East Hampton Town Supervisor Larry Cantwell why the car service is needed.

“We need your help to bring Uber back. Make your voice heard and contact town supervisor Cantwell today.” Uber said in the email.

27 East reported that Cantwell received more than 100 phone calls and 600 emails in response. 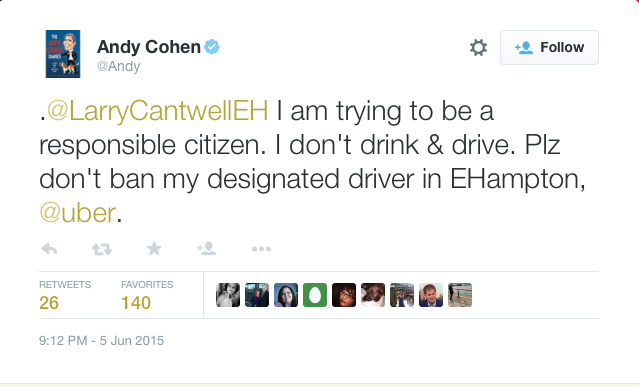 Some celebrities aren’t very pleased with the recent news.  Bravo host, Andy Cohen, is hopeful for change.  Just like Cohen, many Uber users feel that the company will help make the summer a safer one.

What do you think? Tell us in the comments.