Brew Crew Cycles is beer’s answer to the North Fork Wine Wagon. You ride a 14-passenger bike around to three Riverhead breweries, sampling local beers for two-and-a-half hours while breaking a little bit of a sweat. It’s such a great idea, it’s almost baffling that no one already came up with it.

They got their inspiration after going on a brew cycle in Portland, Oregon last year. It was a perfect fit for Riverhead, where there are three breweries. The tours make stops at Long Ireland Brewery, Crooked Ladder Brewing Company and Moustache Brewing Co., all within a mile of one another.

“There’s all these breweries in Riverhead, and this is something we could capitalize on,’” Clacherty said of the idea to start Brew Crew Cycles. “We found someone to make us the bikes and here we are.”

The bikes, which were manufactured in North Carolina, have 12 seats and a bench that seats two. Individual riders are $30, and groups can get the entire bike for the day for $375. Tours are currently available on Saturdays and Sunday and starting July 4, there will be tours on Fridays through the end of August. And even bigger plans are in the works. 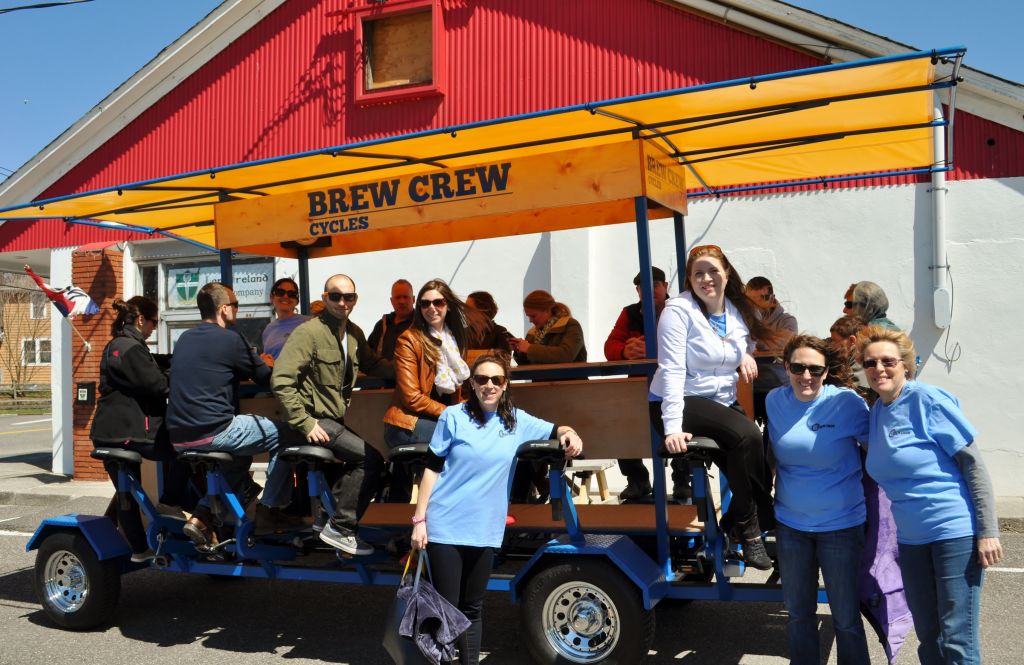 “We’re looking to expand to weekday tours and we’ve already started talking to some chefs about doing some tours that maybe involve offering some lunch,” Clacherty said.

Already a family business, Brew Crew Cycles has found an extended family in the Riverhead food and beverage industry, where the vibe is friendly rather than cut-throat. Take, for instance, the three breweries on the route.

“There are three breweries here that could really be in competition and they’re not,” Clacherty said. “They’re not competing against each other, they’re helping each other. They helped us.”

Like the breweries, local bars and restaurants have helped get the word out about Brew Crew Cycles.

In the second weekend, two groups of local bartenders went on tours. Afterwards, they spread the word, and locals have been coming because of it.

“There’s a lot of support, so that has really made our business,” Clacherty said.

And now, Clacherty and her family of Long Island natives hope to help Riverhead continue to emerge as a place to be.

“We all feel this is an amazing place to be and we want people to come here, she said. “It really is a unique place, and we really want people to get out here and see it.”