I once condemned cruising. Then, after back-to-back assignments—a chilly off-the-grid mountain trek in Myanmar and a Canadian Rockies crusade with my 10-year-old daughter where everything I said was countered by “How do you know?”—I pined for a breezy Caribbean auto-pilot holiday where my sole concern would be choosing between spelling bees, lime and ginger body massages, or a veteran Filipino rock cover band blasting Van Halen. Port Canaveral, FL, the launch-site, fades into the horizon, the outdoor DJ cranks Foreigner and AC/DC. 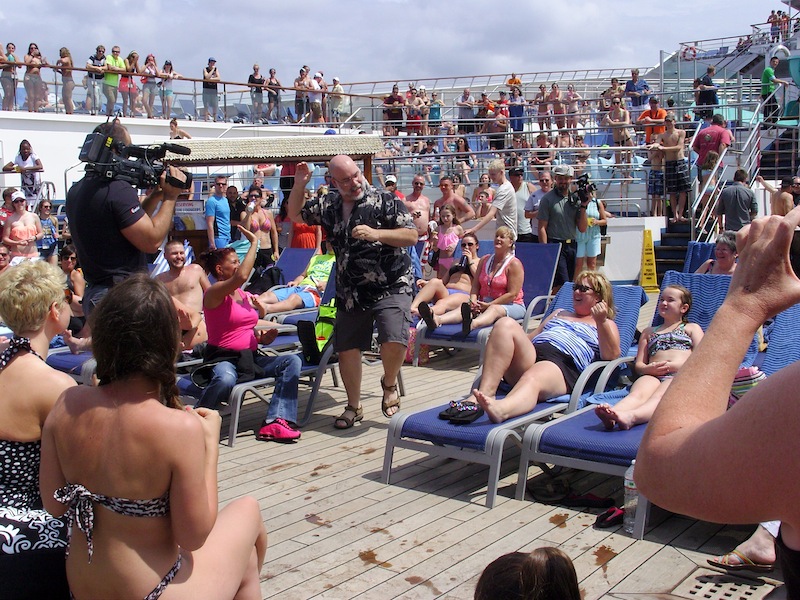 I began to settle into this friendly floating rock village, until Carnival Liberty’s “Men’s Hairy Chest Contest” stole the show. This signature event invites hairy men of all size and dimension to woo a panel of female passenger judges. The humorous catwalk format turns otherwise law-abiding dudes into mating-call dancers, who later answer a few game-show-style questions. The victor, a rotund fist-pumper, was ultimately redressed when the MC announced that the two final contestants would ultimately be judged by the accessories they could accumulate from female passengers in five minutes. My introduction to cruise culture percolates.

Some occasions, like weddings and concerts, automatically make it okay to treat everyone you meet as potential pals. The music scene alone on this ship struck that chord. Throughout the cruise, two up-and-coming solo guitarist/singers entertained, reminiscent of sought-after acts that play in Vermont ski lodges. The common-bond theme even flowed into the Seuss-a-Palooza Parade for tots. The animated storytelling troupe amused many adults attending without kids, including me. The wide-spanning demo included 15 percent kids. The kid population, not surprisingly, soars whenever school is out. 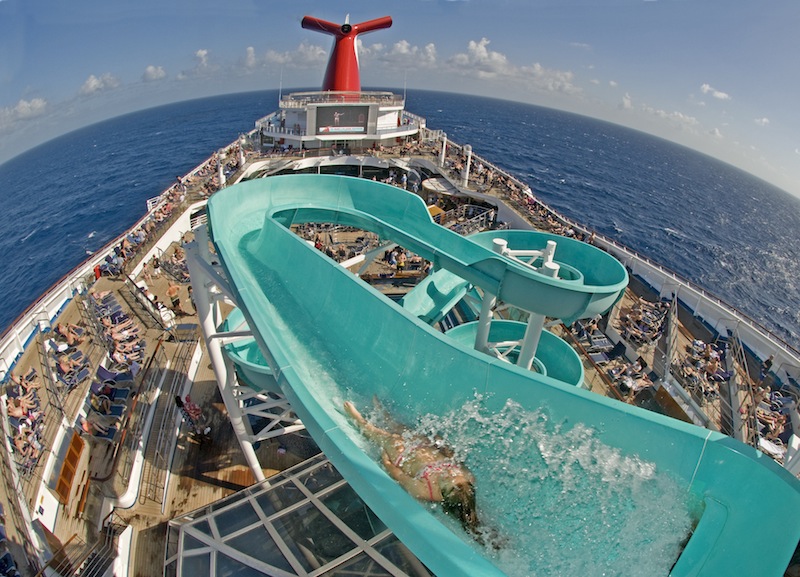 I passed the Hip Hop Dance Class in the lobby beneath a 10-story atrium. Things were heating up, so I headed to the penthouse deck where a running track encircles a court for basketball, volleyball, and soccer, all being played simultaneously. I am recruited to enter a free-throw contest and am outdone by a woman sporting a basketball jersey. I head over to another open-air attraction—a miniature golf course—and redeem myself.

After pausing in the sports bar for some March madness, I waltz past a flock of gambling fat cats, ultimately landing in the Piano Bar. Nearby, I’m reminded that dancing creates happiness when an easy-listening duo prompts a formally dressed elderly couple to dance up a storm. Later, at the nightclub, a grandmother and daughter boogie to the 70’s disco hit, That’s The Way I Like It. This is when I unleash my lasso-throwing jig. 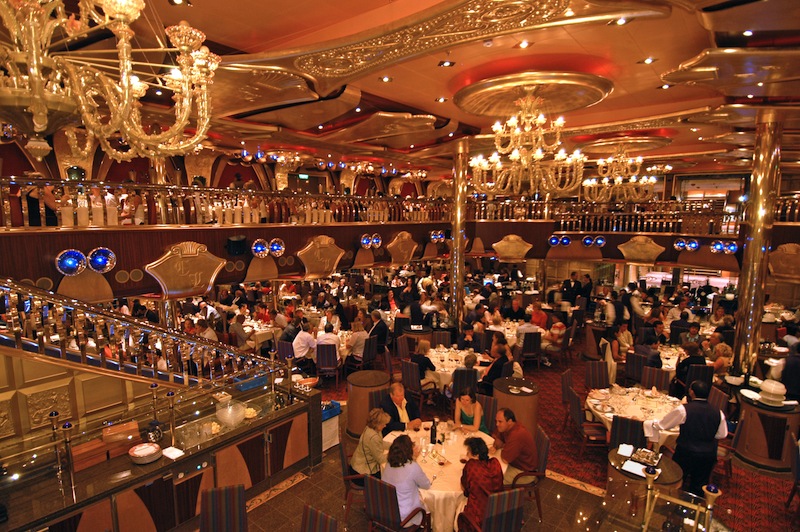 It’s important to nourish one’s disco habit. Fortunately, the onboard dining options, with cuisine that wows, include tempting buffets and formal sit-down dinners where the atmosphere recalls a festive wedding. Waiters occasionally break into group dance routines—you won’t see that at Outback. Two of the main pool decks’ outdoor offerings are a gourmet burger bar and a burrito stand. This outdoor amphitheater of lounge chairs is also where the musicians entertain, including groups relaxing in two Jacuzzis and at two opposing bars. The area also serves as a seaside movie theater where the stadium-sized screen creates a drive-in movie environment, but with comfy deck chairs. 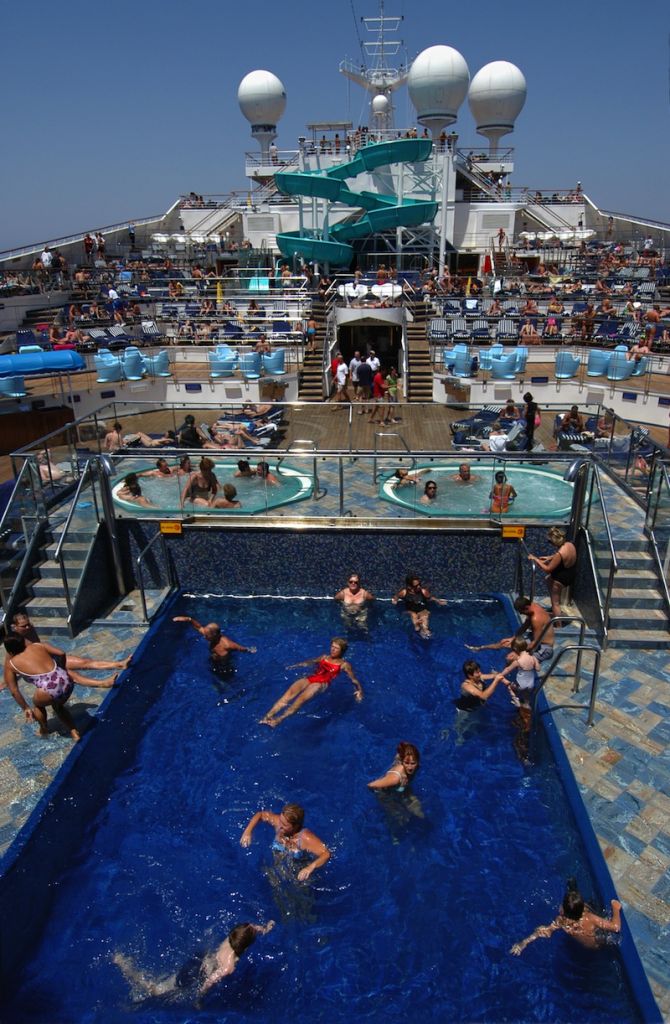 I enjoy digging deep into conversation with bartenders and police-types. As a travel writer, I’ve always insisted they’re untapped resources for what is really going on within their realms. Bartenders reign from everywhere, and ship security is handled by cordial Filipinos and Indians with law-enforcement backgrounds back in their homelands, thus they can all tell a story. I see a robust man wearing a green t-shirt stating something naughty. I consider regaling a security guard, but instead attend a free wellness seminar on acupuncture, detoxing, and back pain.

The first of three port stopovers is on Grand Turk, one of the 40 still British-colonized islands that make up Turks and Caicos. Bajari beach was transformed into a party when 50 daytrippers landed at a classic beach-bar reggae party with homegrown jerk chicken and free-flowing cocktails. The Rasta bartender explained, “Our entire island could go live on your ship.”

Next stop, Puerto Rico. Old San Juan, like Havana and every other Spanish colonial city, charms at every turn. Many of its landmarks are older than anything on our mainland. In fact, El Morro Castle is the oldest fort and oldest National Park in the U.S. The Spaniard-made treasures in St. Augustine and Pensacola hijacked the design. Sixteenth-century architecture and antique homes painted in every pastel hue line Belgian-made cobblestone streets made from iron and stone, giving them a bluish tint. It’s another world.

While sampling the music pouring out of various venues, I waltzed into Los 3 Cuernos, a dive bar blasting Puerto Rico’s trademark salsa, where currency, mostly US dollars, is the wallpaper. Each note is either artfully decorated or inscribed with words of wisdom, such as “Peace & Equality” on a Vietnamese note along with a handlebar moustache drawn on the president’s face, a pirate-eye patch drawn on a Saudi leader, and “What you think about comes about!” on a U.S. single. I enjoyed this concentrated blast of opinions, musings, and civil disobedience. On the way back to the ship, I see tourists posing with parrots on their shoulders. Who said tourist traps aren’t entertaining? 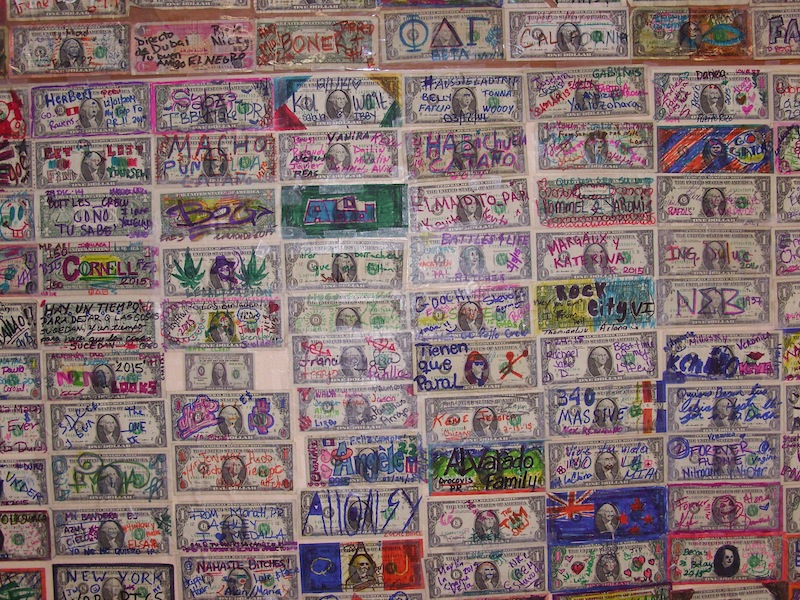 Back on board, I dine via the Mongolian Wok on some Thai barbecue while discussing the soothing aspect of living in a cabin with an always evolving view. (Tip: bring speakers for your laptop or phone to turn your cabin into a fun zone.) The next night in the top-notch steakhouse, I’m amused by the way the Eastern European waitress recognizes and cajoles the winner of the Hairy Chest Contest (many employees let their hair down and really get to know passengers). Then I was off to Epic Rock, a dazzling Rock of Ages type performance.

The final docking is in St. Thomas—tropical Americana—where I enjoy the option to snorkel and chat on a party boat that makes two snorkel stops. Afterwards, the party boat’s captain sent me to a local joint named The Dog House, an open-air hangout where locals bemoan the island’s expensive electricity, but celebrate its healthy economy. Meanwhile, live bands rock on an adjacent deck. It really is possible to get a feel for these cruise ship port regions if you dig a bit. 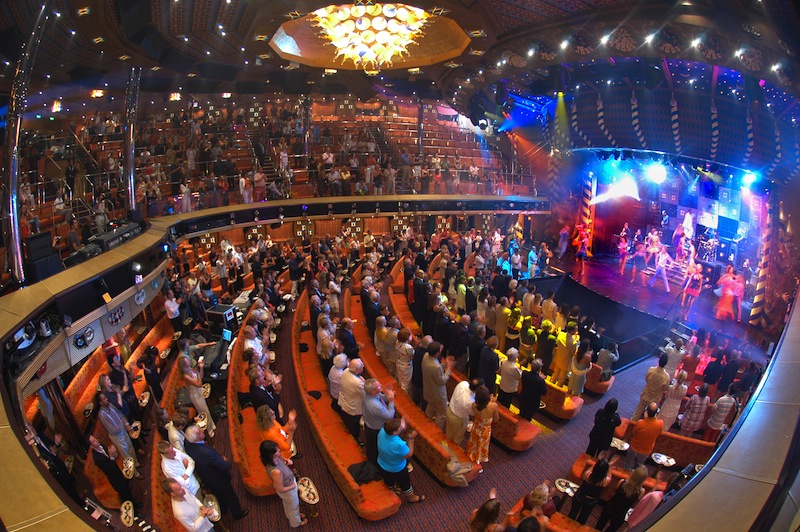 My draw to this ship, the Carnival LIVE Concert Series, is on roughly half of its 24 ships, which depart from several homeports along the east coast and Gulf of Mexico. In 2014, they hosted 49 shows on eight ships. Shows for 2015 include Boston, Heart, Journey, Lionel Richie, Little Big Town, Rascal Flatts, Styx, and the band Perry. While docked in St. Thomas, Journey performed in the ship’s 1,300-person theater, where there isn’t a bad seat. An intimate encounter with the musicians is practically guaranteed. Journey spiced up its powerful storm of hits with improvised guitar and piano solos, and the crowd roared—the best of rocking at sea.

In the end, the music made the cruise for me. It was a musical city with a constant breeze. After he played an incredible, extended lead from Eric Clapton’s Cocaine, I befriended the Filipino rock cover band’s guitarist and we talked about my hikes in the mountainous regions of his country. As I’ve been to nearly 140 countries, I also enjoyed the employee name-tags denoting their country, and then ultimately celebrating their music with them.