Chris Pratt is having the time of his life and he has no intention of holding back his enthusiasm. The former star of TV’s Parks and Recreation has undergone a massive transformation both physically, he has lost over sixty pounds from his peak “fat boy” days, and professionally. Last year’s surprise summer hit Guardians of the Galaxy put him on the A-List and now he’s embarking on his second blockbuster franchise in Jurassic World the fourth installment in the franchise that Steven Spielberg first directed.

The film will also doubtless reinforce the notion that Pratt is a worthy successor to Harrison Ford as a popular action/adventure star.

Ironically, there have been rumours circulating around Hollywood that Steven Spielberg has tapped Pratt as Ford’s replacement in a possible reboot of the Indiana Jones franchise. So how does the loveable, effervescent, and irrepressible Chris Pratt feel about his rise to fame and fortune?

“I’m just loving everything about this,” Pratt gushes. “I remember how I had got into this mindset of being the fat guy who loved to party and I let myself go physically. But it wasn’t a healthy way of thinking and I wasn’t going to get a lot of good parts playing that kind of character. Now I’m in a position where I’m up for the biggest parts. It’s amazing!” 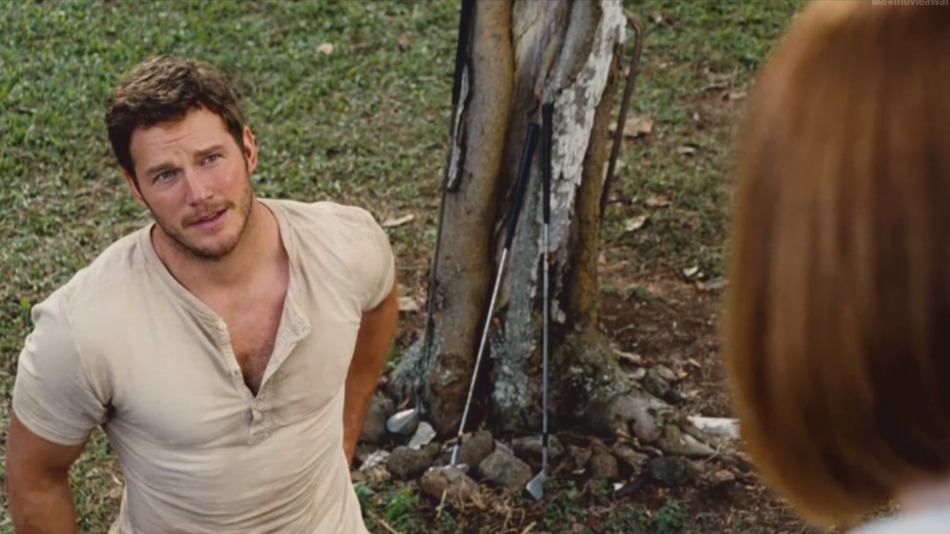 Louder. More Teeth.” as a way of attracting tourists to the vacation destination. When Rex leads a dino revolt, it’s up to Grady and Dearing to find a way of saving thousands of edible human visitors to the park and stop Rex in his tracks.

The handsome, boyish-looking Pratt is best known for playing the dorky Andy Dwyer on Parks and Recreation where he earned a cult following.

Meanwhile, after going on various fitness and weight-loss programs, the 6’2″ actor opened up a whole new career in films ranging from Moneyball (2011), The Five-Year Engagement (2012), to Zero Dark Thirty (2012) as part of the Seal team that killed Osama Bin-Laden.

Pratt, 35, lives in Los Angeles with actress Anna Faris (Scary Movie), 38, whom he married in 2009 after they met on the set of the comedy film, Take Me Home Tonight. They are parents to a two-year-old son, Jack. He recently recalled that prior to becoming a star, he was often treated as Anna Faris’ ungainly escort: “I’ve had those moments,” he says, “where I was like the guy holding the purse at events and people just looked right through me.

And, you know, actors would come up and just blatantly hit on my wife in front of me and don’t even look at me. I’m like, ‘What the fuck, dude?’ I can think of exactly who they are, too, and I hope they fucking audition for (the next) Guardians of the Galaxy.”

Long Island Pulse: Chris, did you go see the original Jurassic Park film when you were a teenager?
Chris Pratt: Oh, yeah. Everybody I knew was going to see the movie. I was 13 at the time and I remember taking my then-girlfriend to the movie but unfortunately we noticed that her parents happened to be sitting two rows behind us. I don’t think they enjoyed the movie very much because they were much more interested in watching what we might be doing. (Laughs)

And now, 23 years later, I have to make a confession.   The girl and I went back to see the movie the next day so we could relax and watch it alone together. It was so much fun being able to watch a great Spielberg film and it was also a really nice moment for us!

Pulse: Does it mean a lot to you to be appearing in your second summer blockbuster following last year’s Guardians of the Galaxy?
CP: I think it means that a studio is willing to trust me to lead a franchise like this. No one had any idea how Guardians was going to do. It was a huge risk and a lot of people were predicting that it would never work. But it turned out to be one of the biggest films and biggest surprises of the year.

Pulse: Do you feel a responsibility to the franchise?
CP: Sure! Jurassic World has a huge history to it and in a way I’m being given a chance to extend the franchise and reach new audiences with it.

It’s exactly where you want to be as an actor. I’m taking my shot and that’s what counts.

To even be an actor for a living is very much a dream let alone being instrumental in continuing to tell the story of a franchise that was a legacy. The idea that we get to be part of this movie and the fact that the film is really good is a genuine relief! 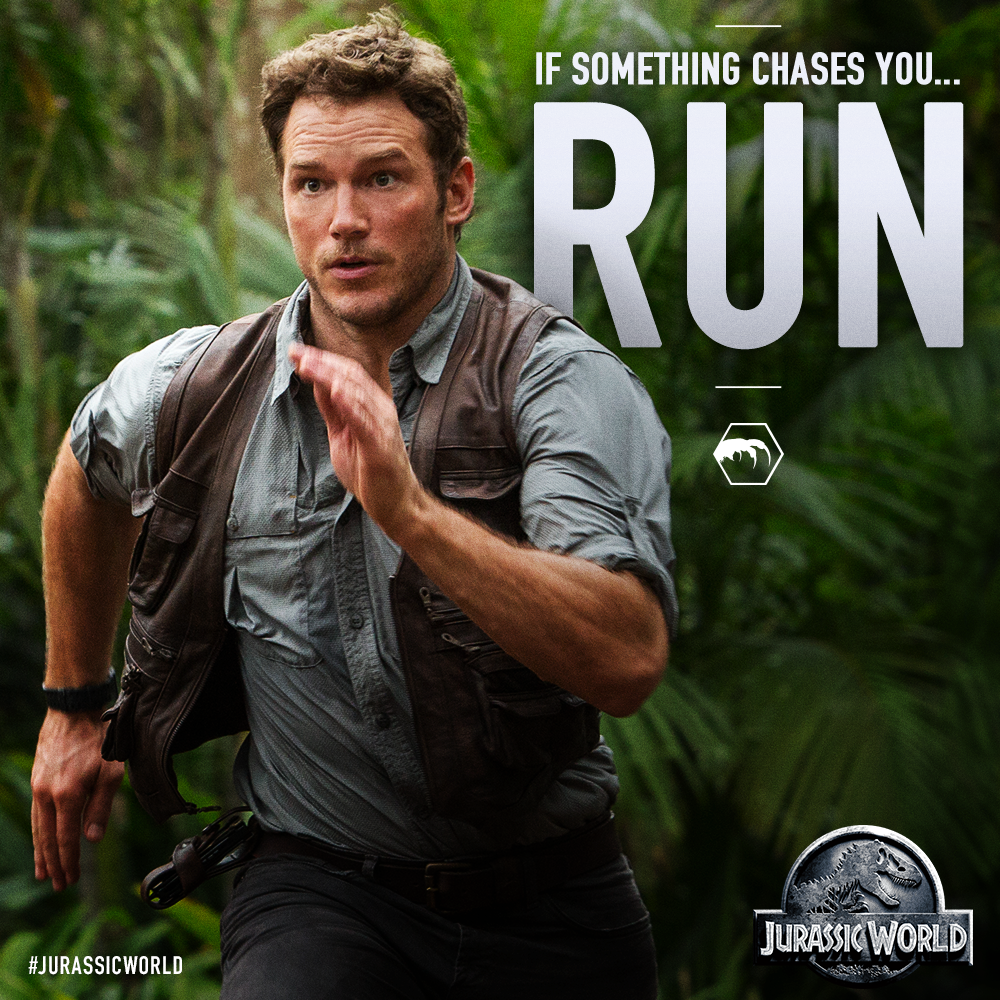 Pulse: Did you jump at the chance to be part of Jurassic World?
CP: I was excited to have the opportunity but I absolutely wanted to read the script first before I agreed to do it. I didn’t want to go down in history as the actor who played the man who caused the final extinction of the dinosaurs! I want to choose a film for the right reasons rather than treating them as cash cows. The plot, however, dispelled all my doubts, because it addresses the sensitive issue of environmental ethics.

In order to attract more visitors and hype the park, they decide to manipulate nature and create a new species. This is a commentary on our modern society and how we often make decisions about our planet and how we transform our world without first examining the ethical and environmental impact of those decisions and actions. We’re also a culture that enjoys instant gratification and we don’t question why we indulge in certain types of behaviour or choose certain forms of entertainment.

Pulse: Your character has a precise ethical and naturalistic view of the animal world that is part of his way of understanding what human nature is all about?
CP: Yes. One of the interesting and nice things about the movie is the human relationships which are of course important for any story. In this case even though of course audiences are going to be thrilled by the dinosaur scenes and making that world come alive, what really keeps you interested is my relationship with Claire and how we’re using our survival skills. Those are the human stories that are so key to the kind of impact the movie is going to have on you.

Part of that human story is my character Owen trying to draw the animal out of Claire. At some point the whole situation sees the fighter mentality drawn out of her and she does something incredibly heroic that leads to this unexpected romantic moment between Owen and Claire. Owen has great respect for the natural order of things and he sees humans as animals. So he liked it when Claire turned into an animal! (Smiles)

Pulse: You’ve undergone a striking transformation in your life in recent years.You’ve gotten into shape, become a sex symbol and major movie star, in addition to getting married and having a child. How do you put all that into perspective?
CP: I had to overcome this paradox of being the happy fat guy when in fact I was not that happy about myself and my body. I was living a very unhealthy life and I wanted to change my appearance but it was hard for me to get to that point. But I had a very supportive wife.

Anna didn’t care if I was fat and she always made me feel that she cared and loved me even if I was fat. She liked me as I was and she still tells me how she never minded that I was out of shape although maybe she’s just being nice in case I get fat again! (Laughs) And she was also partly responsible for my being chubby, she’s an amazing cook!

Pulse: You’re a very proud father to your son Jack. Are you and your wife Anna thinking of expanding your family?
CP:Anna and I would like to have another child, even if the birth of Jack, who was born nine weeks premature, was very complicated and was a very trying and emotional time for us. We’re even thinking of finding a home far away from Hollywood, where the fact that you’re in the film business and how much money you earn doesn’t matter to other people and you can just live a very normal and regular life. People who know me know how I’m a very simple guy, the son of a miner and construction worker and a Safeway cashier. I have no illusions about who I am. I want to lead as real and honest a life as I can.

Pulse: What’s the best thing about dropping all the weight?
CP: Everything’s better. Better sex, more energy, less aches and pains in your back and knees. You feel like you’re a whole new person.

Pulse: What kept you going during the darker times when you weren’t very happy with your work or your life?
CP: I always had a crazy blind faith in myself. I knew that I would one day be playing big parts and have a great career. I didn’t know how I was going to do it and I didn’t even have much of a career plan until much later. But there was always something inside me that gave me hope and confidence that I was going to achieve something greater in life than anyone would ever have expected me to achieve.

Pulse: What is the best thing about your life with your wife Anna Faris?
CP: We make each other laugh all the time…and the sex is fantastic!