Strong, clear, and incredibly dynamic, David Crosby ‘s voice permeated the electrically-charged atmosphere of Brooklyn’s Kings Theatre, bringing the sold-out crowd to its feet time and again during the triumphant May 16 performance by Crosby, Stills and Nash. Graham Nash was equally as powerful in his own right, and Stephen Stills reclaimed a level of vocal strength not heard in years, but it was Crosby who astounded the most.

Like the young Byrd who flew into uncharted musical territory in the 1960s, Crosby’s voice soared effortlessly to stratospheric heights, melodiously swooping down, around, and through the voices of his two partners, creating transcendent harmonies that left me open-mouthed in awe from start to finish. Judging from the reviews of CSN’s recently-completed U.S. tour, the group has reached deep into itself and found new reserves of energy and stamina, delighting audiences from coast to coast. Speaking with David backstage after the May 16 show, it was immediately apparently just how stoked he was with the performance, citing the audience’s overwhelmingly positive response as the catalyst that brought out the very best in the band. Including—as always—new material with the classics, Crosby’s solo spot provided a tantalizing hint of what is to come when he brings his summer solo tour to Town Hall in New York City on June 25. 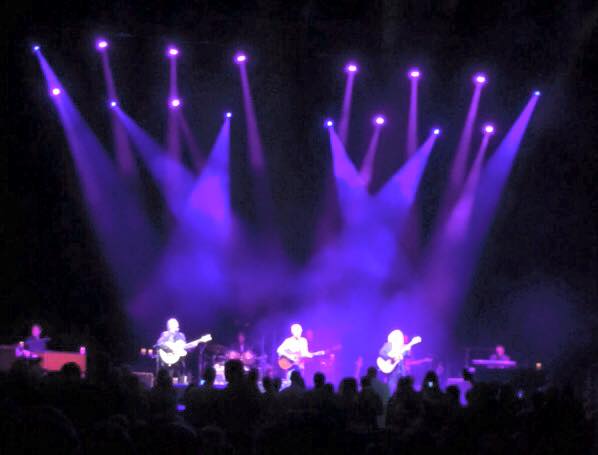 A lengthy phone conversation with Crosby conducted on May 30, one week prior to the tour’s launch on June 6 at the Kerrville Folk Festival, provided an opportunity to revisit some familiar territory and explore uncharted terrain with a musical legend.

Long Island Pulse: Having seen CSN on every tour since 1978, what I witnessed at Kings Theatre on May 16 may well have been a performance high. I’ve read nothing but stellar reviews of the shows. With the US tour wrapped up, what was the general consensus from the three of you?
David Crosby: Well, frankly, we’re kind of surprised at how well it’s going. We felt the same way as you did. Those were stunner shows, the two of them there. We did two out in New Jersey and we did two there. I was amazed. You know, we can deliver a certain level 95% of the time but a great audience pulls us up. That was a great audience. They were really into it. I think it’s partly because it was New York and partly because it was Brooklyn, and partly because that theater was so good. Is that a beautiful theater or what?!I don’t know if anybody’s going to play the Beacon anymore! That place is a stunner!

Pulse: Going back to last year’s performance at City Winery in Manhattan in support of your Croz album, your voice just keeps getting better and better, defying both time and logic. Although I asked you this question last year, how do you account for it? Do you do vocal exercises or anything of that sort to keep it in shape?
DC: Like fine wine and good cheese, it improves with age! I have no real explanation for it, man. If I were religious, I’d say well, they have more work for me to do … but I’m not. I can’t really find any sensible way to look at it except to be grateful. I go for it in the middle of a song, and it’s there. I can hear it; I know it is, I know I’m singing well. I don’t want to brag about it, because it’s not something that I am really responsible for, as if I had cleverly written a great song. I’m personally proud of it when I write a great song, that’s something else. But to be given the gift of being able to sing the way I do at this age, I can’t take personal credit for that; it’s just something that’s there. The only sensible thing I can do about is be grateful … and I am incredibly grateful.

A conversation with David Crosby is always a fascinating journey. For the full trip, visit Island Zone Update