Our mothers told us not to judge a book by its cover, but I have something to admit. I almost always do and it’s not just books. Perusing bottles of wine, beer and liquor in the package store it’s always the label that catches my eye first.

Greenport Harbor Brewing Company must understand this fascination with packaging. They’re offering a behind-the-scenes look at the creation of their new labels in the art exhibit, Message On A Bottle, on display now through July 20, at their Carpenter Street location.

Message On A Bottle features the sketches artist Scott Bluedorn did while working with Greenport Harbor Brewing Company co-founder John Liegey to create images for the brewery’s recently released bottles.

“We created final images that recall the maritime heritage of the region while conceptualizing the character of the beer,” Bluedorn said. “The original “House of the Whale” image, a pen-and-ink drawing that came out of in-depth study of whales and local architecture, served as the springboard for several ideas of taking a locally important animal and “dressing it up” to serve the art in a fun and imaginative way.”

The exhibit gives a glimpse into the story and conceptual foundation of the labels on Greenport Harbor Brewing Company’s four new ales: Harbor Ale, Other Side IPA, Summer Ale and Duck Porter Ale. 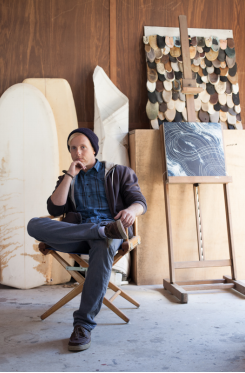 Harbor Ale, for instance, has a label featuring a North Atlantic right whale, spotted in Greenport Harbor in October of 2014. Right whales are incredibly rare, with only about 600 left in the wild.

“The right whale was nearly decimated in the 19th century because it was the “right” whale to hunt, it is full of oil and floats when dead,” Bluedorn said. “The combination of this beautiful animal with the architecturally characteristic shingling of the east end of Long island serves to link these things as part of our heritage.”

The label for Otherside IPA is the one that Bludedorn said gave him the most trouble. The beer is an ‘east coast’ version of a hoppy west coast India Pale Ale, where the craft beer movement started. Bluedorn wanted the label to reflect the idea of being somehow opposite but the same, like a mirror.

“Many concepts later, we arrived at the image of a submarine in the form of a striped bass probing the surface of the ocean, but right side up in an upside-down environment,” Bluedorn said. “This idea is funny in so many ways: imagining this craft piloted by an underwater species exploring the ‘above-water’ world in the same way we would. The periscope is aimed at some fishermen in a little dory, and they are mutually curious. “

Message On A Bottle also displays prints of Bluedorn’s original label art. Design sketches, and works unrelated to the labels.

Next time you peruse the aisles of the package store, go ahead and judge the labels. you may know a bit more about the labels or maybe just wonder about them even more.