Chef Jason DeBriere oversees the kitchen of La Brisa in Montauk as it sends out his version of casual Mexican taqueria food. But Google him and one of the first results is a video of him teaching Martha Stewart how to make biscuits. He’s managed to do both earnestly and the connection between that 2012 clip and where he is now happens to be a memorable fish taco.

DeBriere grew up around Mexican food in San Jose, CA. “The friend I grew up next to came from a first generation Mexican family…The crux of the house revolved around the kitchen and eating. Every time I was there his mom would make me sit down and eat something,” DeBriere said. Back at home he enjoyed being in the kitchen with his mom or grandmother and by high school took on making family dinners. 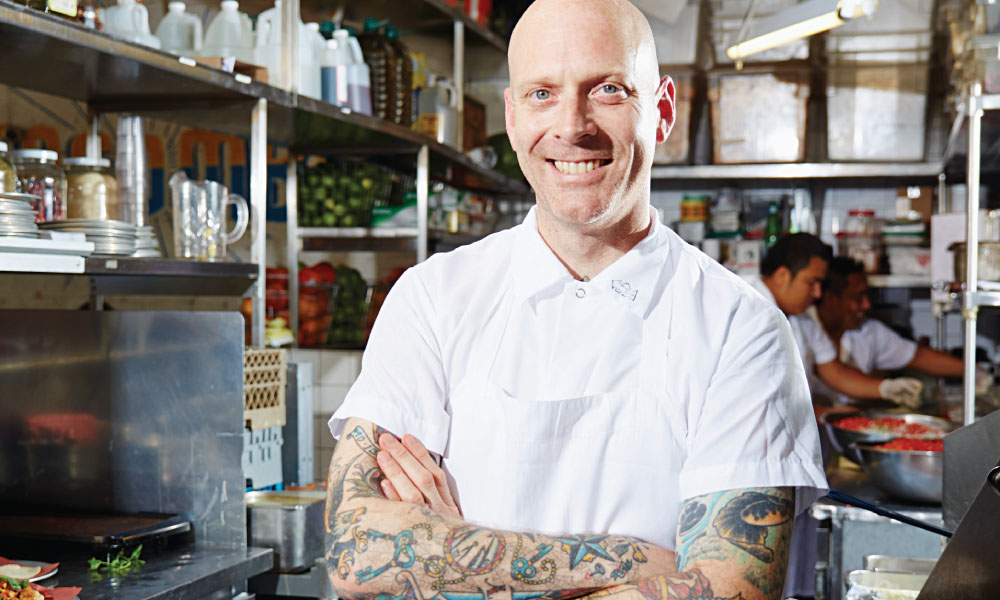 Chef DeBriere is bringing a breath of fresh air to Montauk with his soulful Mexican dining experience. image: yvonne albinowski

After college he worked as a scientist in the biotech industry but eventually used a connection to get into the kitchen of an Italian restaurant in San Francisco where he made sauces, pastas and sausages from scratch. All the while he was visiting Mexican taquerias during trips to Tijuana and Baja California, cataloging the flavors he draws on today.

“In Baja you’d get, on a larger corn tortilla, a piece of fresh, flaky, buttery white fish that they seared off on the plancha with salt and some chili powder, finished with a nice fresh pico de gallo and shredded cabbage dressed with a little lime juice. For me, that and a nice cold beer, I’m set.”

After a cross-country drive to New York City with $500 in his pocket, he started working with chef Marc Meyer (at the now closed Five Points) who focused on using local, sustainable produce. That shaped how DeBriere buys products. As the executive chef of Tacombi’s restaurant group (including NYC’s Tacombi at Fonda Nolita and Café El Presidente), DeBriere buys whole hogs from farmers for meat and lard, sources heirloom beans from Mexico and makes tortillas from scratch.

After Five Points he helped open Peels, which is where DeBriere’s name first caught on with foodie websites. “One of the biggest things we did was this build-a-biscuit idea where you’d order a biscuit with anything you wanted. So I set out to recreate a family recipe for this buttermilk biscuit I remember my grandmother making.”

For La Brisa’s second season DeBriere is bringing together the flavors and experiences he’s had in Mexico. “I was in Mexico City not that long ago and there are these little breakfast places where you just stand there, tell them what you want and they make you a little taco. You eat five or six of them, then go to work.” That’s what he’s bringing to Montauk—light, fresh, food with a big seafood component served casually to-go or for staying behind to enjoy with a Modelo.