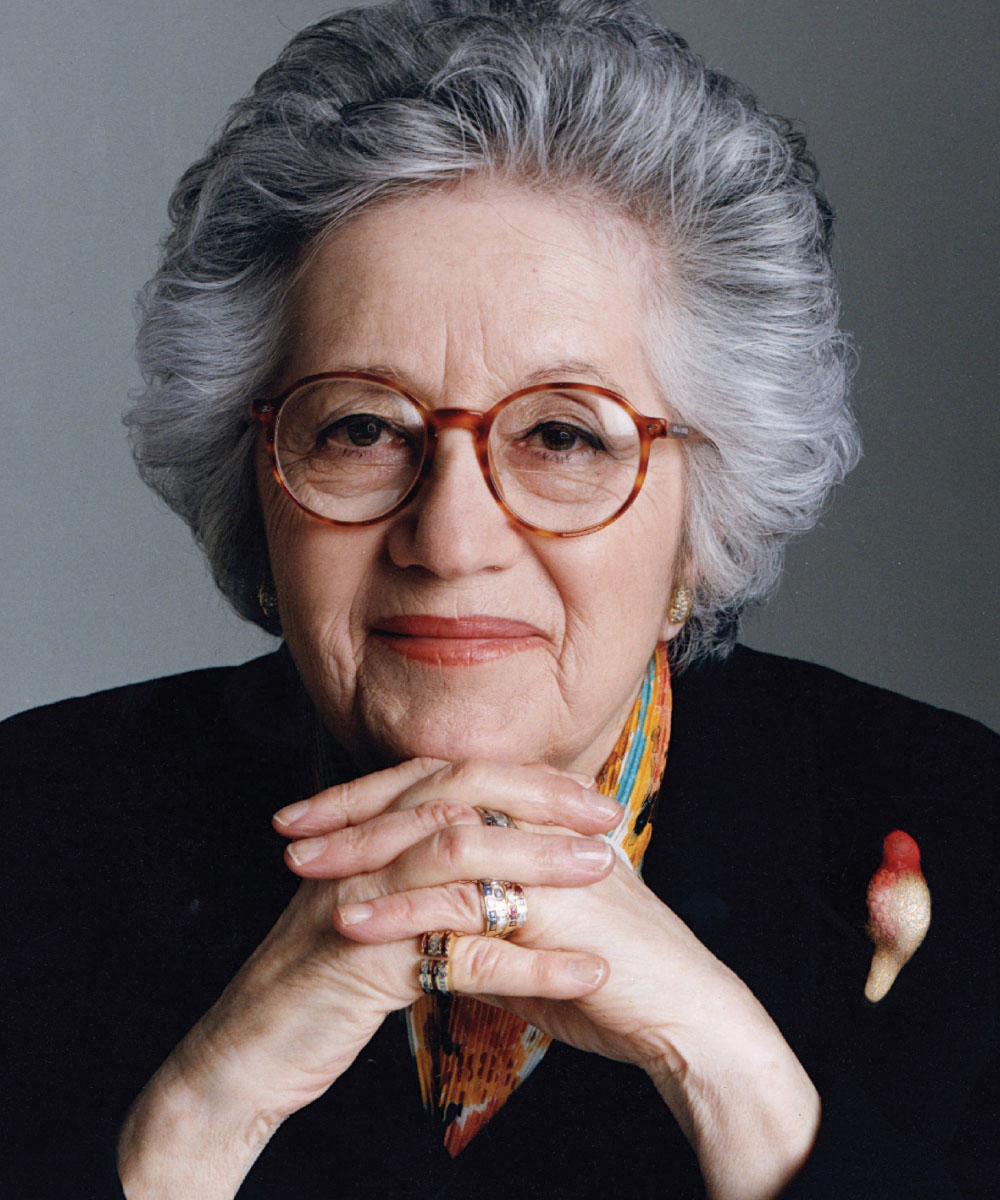 The way Judith Leiber’s handbags sparkle with crystals, they are the definition of decadence. But Leiber’s life has been no limousine ride. Born Judith Peto, she was set to enroll in school for chemistry in her native Hungry in 1939 when World War II broke out and threw Europe into a tailspin.

But Leiber was ambitious. Although most forms of employment were off-limits to Jews, she was able to get work in an artisan guild that had a small factory in Budapest. The husband and wife that owned the business had her running basic errands, but she wanted more. “I wanted to learn the trade,” Leiber, now 94, said in her East Hampton home.

She eventually apprenticed under a man who could sew, cut and make skiving (thinned pieces of leather made workable to use in the designs). He would work directly with a single customer and execute every aspect of the creative process. “In America, there was a framer, a cutter, a helper,” Leiber said. “In Europe, the handbag maker did everything.”

As Hungarian Jews were being carried off to concentration camps, Leiber and her sister found shelter at a Jewish Community House. “Theoretically, we were mending men’s pants,” a task that was crucial to the war effort. During that time, her father was able to get a Swiss pass that protected the family, but eventually the Nazis moved them, at gunpoint, to a ghetto. There they hid in a cellar, waiting out the battles between Russian and German forces and watching the atrocities unfold. “We were very lucky,” said Leiber.

By the end of the war, the Americans came in and set up right in the center of Budapest. At the time, Judith’s future husband, Gerson Leiber, was a radio operator with the allied-control commission. “The Siege of Budapest was extremely tough,” said Gerson. “Most of the buildings were heavily damaged. A couple of GIs and I were standing out front of a pension and along came two women. Judy was dressed to the nines and she spoke English with an English accent. I was very taken with her.”

The two started dating, spending as much time as they could exploring the museums of Budapest. Gerson studied painting at the Royal Academy there and Judith worked at a home business selling handbags to women in the American Legion. They were married in 1946 and the next year, they left for New York.

Once she came to America, Judith’s skills were quickly put to use. After a few tedious positions, she landed a job at Nettie Rosenstein, the most expensive handbag designer in New York at the time. She climbed the ranks at Nettie Rosenstein over the course of 14 years until 1963, when Gerson succeeded in urging Judith to go out on her own. Gerson, whose abstract paintings are in the permanent collection of the Art Students League of New York and whose prints are in the Smithsonian, was intimately involved in the launching of Judith Leiber as a brand. “We started out just the two of us and a small crew. A sewing machine operator, a cutter and a helper,” Judith said.

In those days, the whole handbag industry could be found in a few square blocks in Manhattan. The skiving company, the company that provided material for linings, everything was right around the Empire State Building. And the Leibers had an apartment in the heart of it on 34th Street and Park Avenue. Soon after Judith Leiber launched, Ladybird Johnson carried one of her bags at the inauguration of her husband. From there, Leiber’s name grew, as did the operation.

“Every two years we expanded and we moved from a small loft to larger and larger,” Gerson said. “We started with three workers and ended up with 200.” About half of those workers were devoted solely to the task of affixing the Swarovski crystals, one by one, onto the handbags. And Judith was on the floor every day, running up and down the three flights of stairs to oversee every step of the process.

“I made all my own patterns,” she said. “In the beginning, and for a long time, I made everything myself. Later on, we got busy so we expanded, but I wanted to be checking on things.” Ten years after they went into business, Leiber received a Coty Award. It was the first time the prestigious fashion accolade was granted to a handbag designer.

In 1993, the Leibers sold the business, but Judith stayed on as a consultant until 1998. The last handbag she designed was in 2004: a peacock that is on display in the East Hampton museum the Leibers built on their property in 2005.

Even though Judith Leiber bags are still being made, the namesake doesn’t feel particularly connected to them. “I’m not terribly excited about it,” she said about the future of her name. “They do things differently than I did, with the manufacturing in Thailand. There’s no factory in America anymore.”

Still, the designs Judith set in motion remain timeless. “Judy is a modest person,” Gerson said, “these bags were extraordinary and they deserve to be cared for and preserved for the general public to appreciate.” About 500 bags at a time are on display at the Judith Leiber Museum. In addition to housing a permanent retrospective of Judith’s work, the space also exhibits Gerson’s recent modernist paintings. Together the displays are a time capsule of late 20th century art and design, as well as a testament of one couple’s life together.