Musicals vie for available Broadway theaters while dramas imported from the UK clog the Tony Award acting categories, yet the state of non-musical comedy seems particularly parlous these days. In the entire 2014-15 Broadway season, only three new straight-up comedies opened on the Great White Way. One, Living on Love, by Memphis Tony-winner Joe DiPietro, closed three weeks after it opened. The other two arrived late in the season, one to huzzahs by most critics and the other to audience delight despite critical scorn.

Hand to God, a pitch-black comedy that debuted off-Broadway arrived fangs intact at the Booth Theater in the spring. Taking its cue from Avenue Q, Robert Askins’ play tells of a timorous teen that finds he can speak out only through the sock puppet he’s designed for bible class. Alas, the puppet turns progressively evil and thirsts for truth, revenge, blood and eventually Jason’s very soul. Meanwhile, the church pastor (Marc Kudisch) has designs on Jason’s mom (Geneva Carr) while she’s busy fending off the advances of an ardent underage student (Michael Oberholtzer).

It’s all very post-South Park in terms of crudity, shock value and blunt religious satire. On the whole, this is the kind of show I would have loved when I was 15 (oh boy, someone tears up a bible!), liked when I was 20 (ooh, the two “sex” scenes are sick-funny) and now makes me shrug and sigh at 51. For all the exertions—and the truly great performance by lead Steven Boyer, who must bounce between being a tormented youth and a demonic puppet—the laughs are few and forced.

In Rex Reed’s scathing New York Observer review of Hand to God, he said, “[it was] the first time in all my years on the aisle that I have finally seen an entire stage filled with unmitigated crap.” To be fair, Reed admits to loathing the delicious Avenue Q. One might be prone to digest his poison here with a grain of salt. Certainly, readers posting under his critique are virulently dismissive of his supposed prudishness and lack of a sense of humor. I dare say that his excoriation feels a lot more justified than the hosannas being heaped on Hand to God by other critics who should know better. The show feels like a teenager’s tantrum, leavened by clever gags and submerged in punishing Grand Guignol horror. 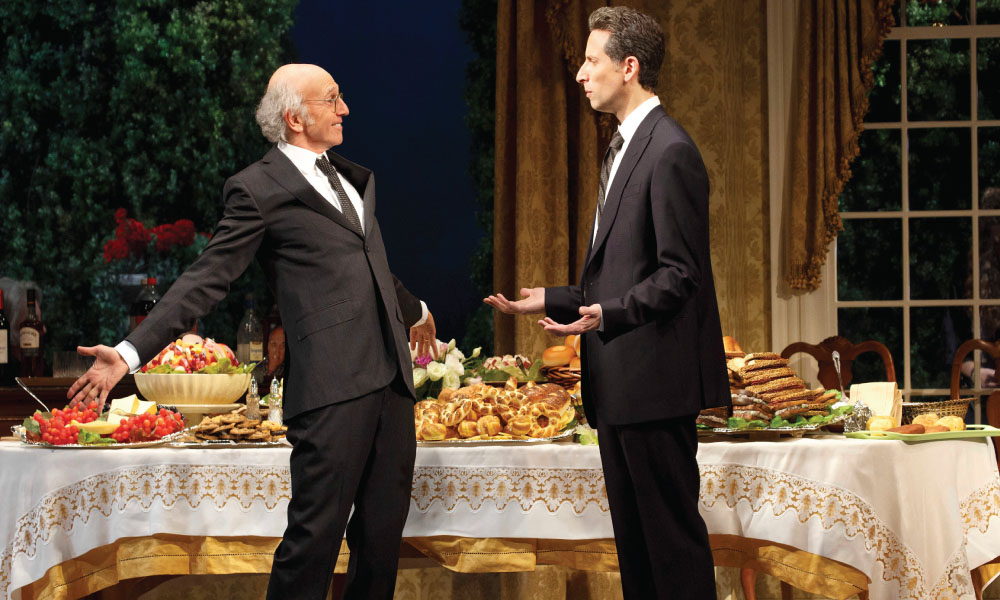 Meanwhile, death, incest and kooky nookie are also on the bill at Fish in the Dark at Cort Theater, although somehow this brand-new show feels decades old, trading on the familiar tropes of not-quite-farce and the comforting awfulness of Jewish families at their worst. The plot is almost deliberately inconsequential: papa dies, so which of the two feuding brothers will be stuck with intolerable mom? À la Seinfeld, there are subplots about greedy relatives, a Latina maid (Rosie Perez), who was more than a cleaning lady to dead-old dad and a eulogy of questionable provenance. It’s all silly and sloppy and, as one friend put it, like a hyper-extended episode of Curb Your Enthusiasm.

It is also, without a doubt The Larry David Show, since he wrote and stars in the piece and parades around the stage like an even more exaggerated version of, well, himself. Given to rampant mugging and line readings so eccentric they sometimes have no connection to the actual dialogue, David is like an exotic bird, becoming more perversely fascinating the more he shows off his plumage.

And yet despite it all, Fish in the Dark gives audiences (myself included) a jolly good time. Those old 1960s Broadway comedies were playful in ways that today’s more “serious” comic playwrights either ignore or can’t emulate. But David understands a basic fact: glorious comic mileage may still be derived from a bunch of middle-aged Jews yelling at each other. And for all David’s scenery chewing, his physicality cannot be denied. His long arms, big hands and tapered fingers are always gesturing, his posture always finding a new contortion of discomfort or defensiveness. I don’t exaggerate when I say that he may boast the most expressive body language of any comedian since Groucho Marx.

But by the time you read this, Jason Alexander will be starring in Fish in the Dark instead of David. Who knows—the Seinfeld and Duckman alum may actually find a human being to play in the comedy. If so, the show will be both richer and poorer for it.