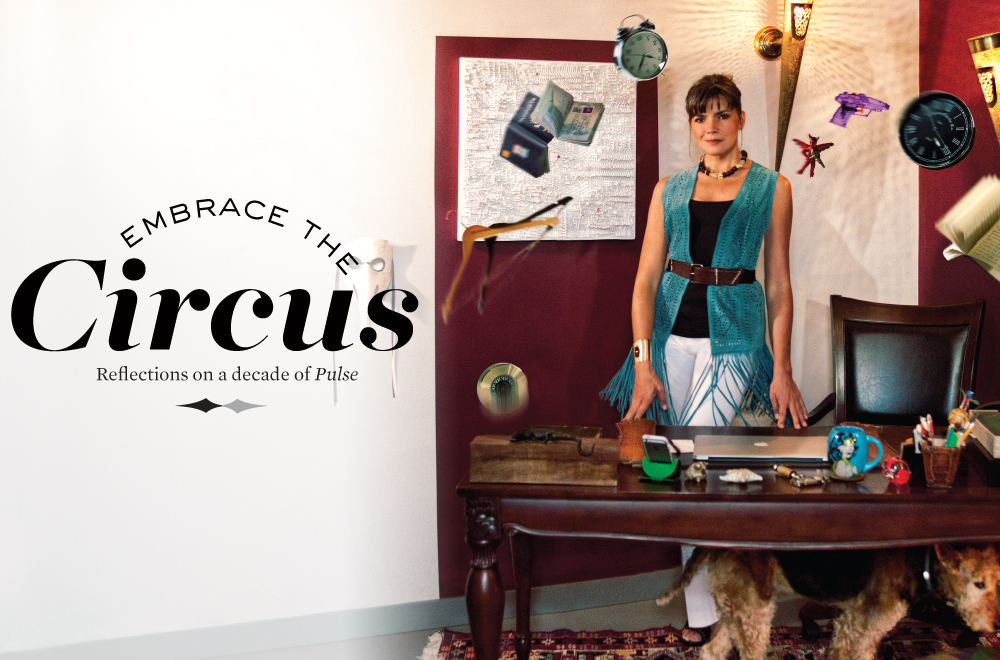 Ten years ago, Long Island Pulse came into existence with the vision to celebrate the people, places and things of Long Island. But the idea to applaud the richness of this vast, diverse region was actually conceived in a much smaller, very intimate context. “It basically started out as a salon,” said founder, publisher and editor Nada Marjanovich. After spending years in dot-com companies in Manhattan and Boston throughout the 90s, she moved to Long Island and eventually opened the doors of her home to routine gatherings of poets, artists, musicians and filmmakers. They came to dance, drink and jam with each other deep into the night, tapping into those life-affirming conversations where new ideas are born. And they were.

Pulse is a rootsy amalgamation of these voices. From its lo-fi early days, the mag found a way to focus on both the underground and the main- stream. The first issue featured a local story about a singer-songwriter series in a barn owned by the Huntington Historical Society (penned by yours truly) juxtaposed by an interview with the late great B.B. King, and that duality continues. There are serious investigative stories like edgy, seminal articles on the rise of heroin or a charge against Shell Oil’s proposed Broadwater LNG terminal off our North Shore, as well as whimsical musings by local celebrities like Billy Crystal, Russell Simmons and Natalie Portman. And, of course, there’s the celebration of all things Long Island. “Ultimately, we cater to a high-end lifestyle,” Nada said, “but that doesn’t mean we don’t write about the $5 dinner as well…it’s just that it will be the best $5 dinner around. There’s room for both.”

Initially, it was a challenge to capture the advertising revenue that would ensure sustainability—back then, the market was very crowded. Although Pulse was the only general interest lifestyles publication—and the only one to dare to go island-wide—there were more than a dozen established titles in print. But as the brand evolved, so did the content. 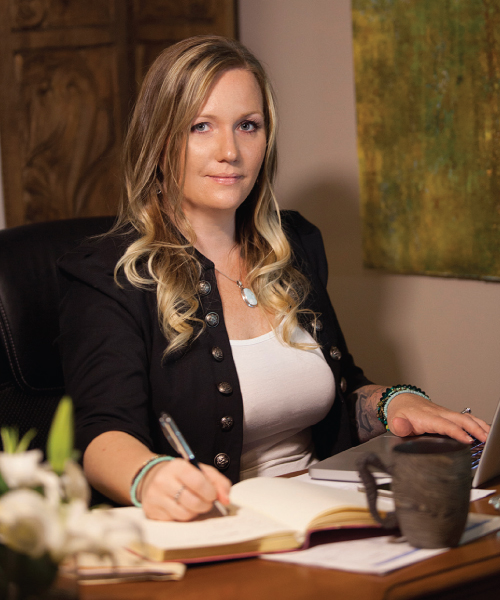 Director of advertising Lilie Perito oversees a staff of eight in driving the business of the magazine.

The arts, culture and entertainment pages were a staple since the beginning, but wellness, home, product and fashion pages were added to support the commercial viability of the publication. “A changing point for the advertising department occurred once we started to include fashion stories. These spreads opened the doors to enriched content, as well as new business opportunities,” said director of advertising Lilie Perito, who’s been at the magazine since 2007.

Pulse grew, always innovating (one of the first magazines in the country to capture 2D barcodes to bring pages to life, the first magazine on Long Island to embrace online and social communities, the first regional media to seriously leverage events as a revenue modality) to find its way into the hearts and imaginations of Long Islanders. It went from 15,000 copies of the first issue in 2005 to 100,000 copies per month in 2006. Pulse has maintained that circulation every issue (with the exception of an increase to 125,000 copies every July), holding not only the distinction of be- ing the only island-wide publication ever available but also one of the largest regional magazines in the country.

And now, more than ever, the magazine has a considerable presence in both counties with offices in Patchogue and Roslyn. “It seems like we’ve always been in a state of construction,” joked art director Kenny Janosick, who’s been with the magazine since  2008. His reference to the continued physical build-out of office space echoes the company’s growth in employees, the magazine’s increased pages and continued evolution of systems and products, like the recently relaunched lipulse.com. 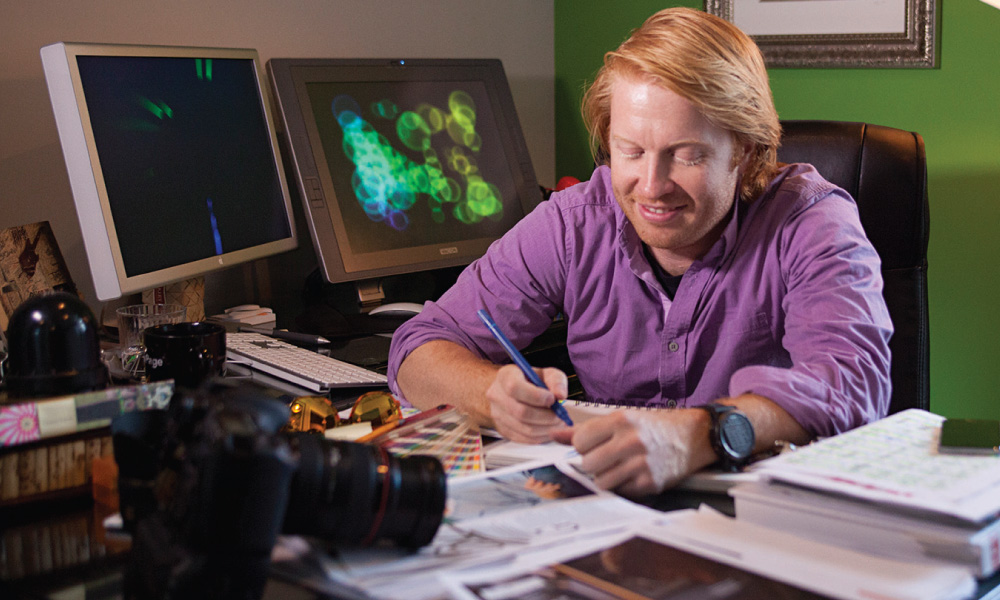 As art director, Kenny Janosick executes the creative sensibility of the magazine, translating the brand’s vision into a singular aesthetic.

Pulse’s success hinges on the enthusiasm and hard work the team puts forth. “We’ve seen no shortage of sunrises through our office windows,” Nada said. She described the inner workings similar to surfing, only the wave of momentum pushing the magazine and its staff is more like “a rogue wall of energy that we all gingerly balance on top of…you have to be sure of your moves and not think about falling.” It takes the entire staff’s acute focus on both the task at hand and the big picture at all times. It’s about syncopation and attitude, passion and tenacity. The details are infinite—it’s not just these words and photos on the page, it’s all the other elements too (page numbers, captions, photo credits, ads…).

Behind the scenes there is a constant hum of details. A fashion shoot takes Nada, an assistant and crew five days to accomplish. Still life of a cocktail for the Drinkology page? A full day of staging, shooting, retouching, writing and editing—one full day, three to five people for just one page. “And because the process is so collaborative, if any one person misses his mark, the five people behind him who have to touch that page are now affected,” Nada said.

There are schedules and schedules to schedule the schedules. And there is unbreakable concentration on not skipping a beat, “Everyone has to be ready for everything. It’s not just the magazine. There is always an event going on. There is the active social network, the website, digital newsletters, productions, building campaigns for clients… the wheels have to stay in motion whether or not you have a headache or the windshield chips on your way in. We can never miss a promise to our advertisers and readers.”

Still, at Pulse headquarters, there’s a constant playfulness in the air, despite a distinct and almost manic energy that surfaces right around deadline time. “We have this phrase we use here…it’s called ‘embrace the circus,’” Lilie said. “Nada always says it’s going to roll through town regardless! Her leadership has created a team dedicated to striving for excellence beyond what any of us are capable of seeing. She’s always reaching for the sky, the moon, the stars and all that’s in between. It is an honor to work alongside someone so utterly commit- ted to success.”

Naturally, the devotion and perseverance of the ad sales team has had to be unwavering. The pool of advertising dollars was particularly shallow during most of Pulse’s infancy (see recession 2007-2011), yet Lilie and her team pulled through, inventing opportunities for clients that grew their businesses, and in turn, Pulse. The events became legendary, the buzz formidable.

There is also a strong belief that content is king: the writing is colorful and sharp, and the design rivals top national publications, winning awards for both areas nationally and locally. Kenny describes the aesthetic direction as “clean, classic with an edge…the idea is to not overwhelm the page…to use restraint.” It’s no small task to “define the life, styles and culture of our region,” as the masthead says, but the team is not afraid of taking chances. “It’s about not saying no, it’s about looking for solutions,” Kenny said. “We’re not afraid of criticism, internally or from the street. That feedback is essential and reminds us to stay honest…We have grown up but we still break the rules and do things on our own terms.”

Mark Twain once wrote, “The difference between the right word and the almost right word is like the difference between lightning and the lightning bug.” The same can be said about the right magazine for a time and place and the almost right magazine. What’s so remarkable about a publication like Pulse is that it has been able to bring together communities that are often defined by their disparities. That, more than anything else, may be its key to a decade of success. Cheers to ten by ten more.