Music wafts through downtown Glen Cove every Friday night this July and August. It draws people to the corners of Glen and School Streets where thousands gather in the Glen Cove Village Square to listen, enjoy the night and just relax at what may be one of the best free summer concert series on Long Island.

For 19 summers, Downtown Sounds has brought music to Glen Cove. Artists, selected by a group of local residents and business owners, include everyone from Long Island bands, tribute bands and even Richie Cannata and JohnOates. Bands that are particularly popular are often invited back, although the goal has always been to introduce something different each year. 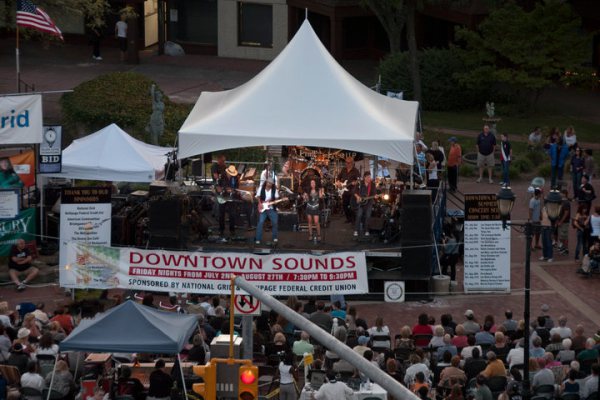 This year, the 20-piece Swingtime Big Band starts off the series on July 3. Led by saxophonist and artistic director Steve Shaiman, Swingtime Big Band performs original and Big Band classics that are impossible not to move your feet to. Other bands for the 2015 season include Los Cintron, opened by Glen Cove native Matt Grabowski (July 17),  MacTalla Mor  (July 31) and The Little Wilson Band (August 14).

In the nearly two decades since Downtown Sounds began, what started off as a small community concert to provide a place for young people to perform while giving the community something to do and generating  businesses has turned into one of the can’t-miss music series of the summer. You’ll often find 1,000 to 2,000 people at the rain-or-shine concerts with people turning up from across the Island, the boroughs and even those visiting from overseas.

If you want to be one of them, head to the Glen Cove Village Green between 7 and 10pm on a Friday night this summer. There’s free parking in the municipal lots and if it rains the whole thing moves to  The Wunsch Center, Robert M. Finley Middle School. If you ever find yourself not able to make it, OWWR streams the concerts online.

Find the full schedule below and visit downtownsoundslive.org for more information.