Don’t get fireworks-ed out this weekend. Save a little room to honor the people who have kept our country the land of the free at the Annual Philharmonic Concert at Heckscher State Park. For the second straight year, the theme of the night is Honor our Hometown Heroes. As always, Fireworks by Grucci will be a part of the grandest of finales.

Grucci will be doing a duet with the Long Island Philharmonic, which will retake the Heckscher State Park stage after a two-year absence.

“It’s such a perfect culmination to an evening,” Moran said. “You have this evening of music under the stars and then you have the final piece being played with the claps of thunder and booms of the cannons and then all of a sudden the fireworks come out and it’s great.”

The show promises to have a little something of everything.

“Long Island Philharmonic is putting together a combination program that will have a little bit of this, a little bit of that,” Moran said. “At one point, we’ll be honoring Joel Ratner with a piece by Louis Armstrong.”

Ratner was the Brentwood district’s coordinator of music and fine arts who passed away in February. 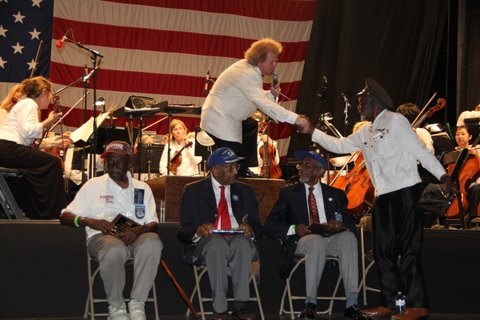 The performance will be one of many touching moments of the evening. Fireworks by Grucci won’t be the only show in the summer sky. Islip Arts Council will be honoring Tuskegee Airmen of the Claude B. Govan Chapter, and one of the honorees, Bill Johnson, will be a part of the flyover with the Bayport Aerodrome Fliers in an aircraft that the Tuskegee Airmen once used.

“He’s so excited to be able to go up into the plane that he actually flew in,” Moran said. “To have [the Tuskegee Airmen] present is just an honor for us.”

A portion of the proceeds of the event will go towards helping the Tuskegee Airmen and other veterans and their families through the United Way Military Family Fund. While the Islip Arts Council has changed the theme of the night over the 36 years of the concert, with so many veterans returning from Iraq and Afghanistan suffering from post-traumatic stress and other issues not always easily seen, there was no hesitation about repeating Hometown Heroes.

“We always look to see what area of the community needs the most help,” Moran said. “[The veterans] are having a hard time infiltrating back into the community. We realized that since this is such a large proportion of our community that that would be the best area to help serve.”

So plan on repeating plans yourself and checking out fireworks two weekends in a row. It’s summer, after all, and it’s Grucci.

For a complete list Fireworks by Grucci shows taking place on Long Island this summer visit this fireworks guide.