A torpedo boat is a relatively small but fast naval ship designed to carry torpedoes into battle. The first designs rammed enemy ships with explosive spar torpedoes, whereas later designs launched self-propelled Whitehead torpedoes. They were created to counter battleships and other large, slow, and heavily armed ships by speed and agility. A large number of torpedo boats attacking simultaneously could overwhelm a larger ship’s ability to fight them off using its slower-firing guns. A fleet of torpedo boats could thereby defend against much larger fleets.

The introduction of fast torpedo boats in the late nineteenth century was a serious concern to navies of the era. In response, navies operating large ships introduced smaller ships to counter the threat. Initially, these were somewhat larger than the torpedo boats they faced, and mounted a light gun battery as well as torpedoes. As these designs became more formalized, they became known as torpedo boat destroyers–and these, in turn, evolved into the modern destroyer. Today the class is generally known as fast-attack craft.

And here’s a bonus photo for you: 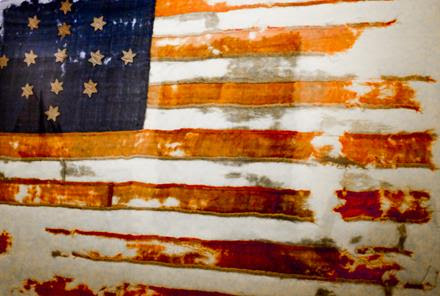 The Hulbert Flag, c. 1775.  A controversial artifact from the SCHS permanent collection believed by some to have been made by Captain John Hulbert of Bridgehampton and carried by him and his militiamen from Fort Ticonderoga to Philadelphia in 1775 where, after having been seen by representatives at the Continental Congress, it might have influenced the design of the first American flag. The flag has been examined by a number of experts who remain divided over the oral tradition of the flag’s origins. The Hulbert Flag remains one of the best known and most discussed artifacts in our museum’s collections.