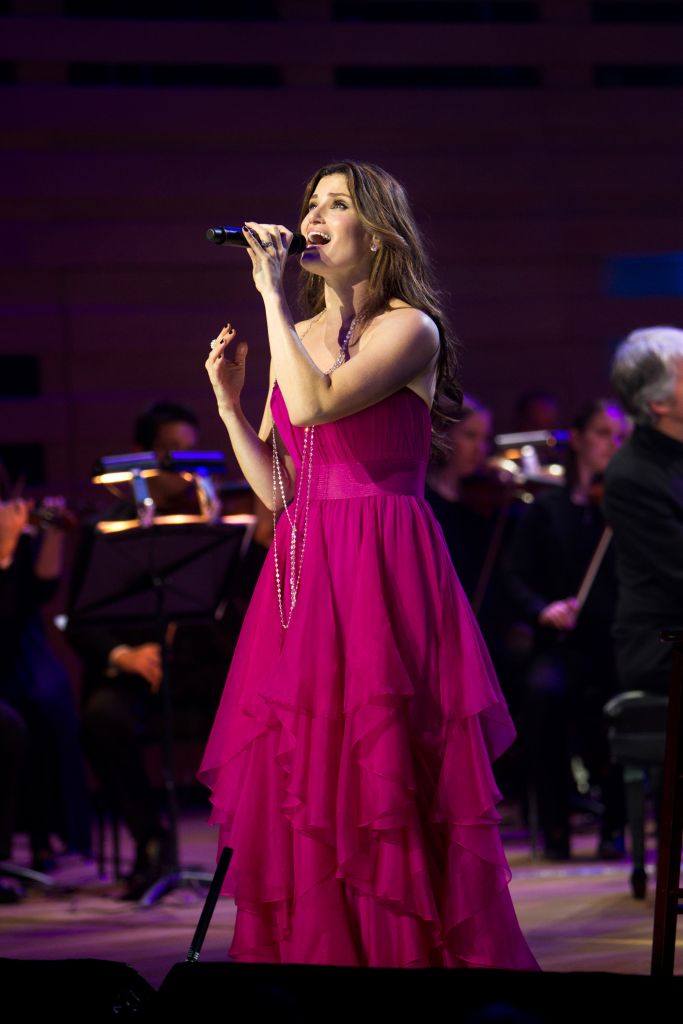 From Oz in Broadway’s Wicked to Arendelle in Frozen, Idina Menzel has visited some unique locales. With her current tour, the singer and actress traveled to the far reaches of the planet, including Japan, Ireland and the United Kingdom. However, only one venue brings her back to her Syosset roots. On July 17, she will take the stage at Nikon at Jones Beach Theater for “the first time with the water behind me!” she said giddily. “It’s going to be a very special evening for me.”

Menzel, who debuted on Broadway with fellow Syosset graduate Adam Pascal in Rent, went on to win a Tony Award for her role as Elphaba in Wicked and another nomination for her lead role in If/Then before winning over a young generation of fans by bringing her talent to Frozen’s hit number, “Let It Go.”

“People don’t realize that each defining project and role that I’ve been a part of has garnered a very young audience,” she said in considering her audience at Jones Beach. “Between Rent, Wicked, Glee and now Frozen, I’ve always had to figure out how to navigate around a wide demographic, which is obviously a gift, but also can be tricky. I’m a 43-year-old woman up there on stage. I might swear about something. Suddenly, I realize that’s a mom in the front row with her 8-year-old daughter in an Elsa costume!” she laughed. “But I have to be myself too.”

Through singing live, Menzel hopes to exhibit the fact that her music is very personal to her.

“Every song, show, character and project is a different part of the chronology in my life,” she said. “It makes me reflect. It changes too. A certain song can hit me in a different way on a different night or a different time in my life. I think that’s what’s so beautiful about what I do. When I was younger, that was frightening. I learned that that’s the only way to connect with people. You have to allow yourself to be vulnerable. I want every city and every audience to feel like they got something that was particular and specific to that evening alone.”

Menzel’s concert at Jones Beach will certainly live up to the high standards she has set for herself. After all, she went to the popular theater for concerts frequently when she was in her formative years and always knew that she would be using her voice for something special.

“Even just thinking about it gets me emotional and excited,” she said of returning to her hometown area. “It’s a beautiful place to play, and returning after having an incredible year or two is a little bit surreal.” As a kid, Menzel said she thought she could do anything. Now that she can be more realistic, her success is even more mind-numbing. “I’m like, wow, really? You’re going to buy tickets and I can fill Jones Beach or Radio City, or Korean and Japanese theaters where I’ve never even before? How do they even know who I am?” she laughed.

She’ll have another opportunity to showcase her talent when she launches the United States tour of If/Then in October. With high-profile performances at the Super Bowl, the Academy Awards and the White House behind her, she hinted at getting back to work on a new album and possibly a new Broadway show. For now, she looks forward to the joy that comes with performing her own sets.

“Being in a play, the minute it starts it’s like being on a runaway train,” she said. “Being in my own concert, I can take my time, I can stop for a minute and talk to someone in the audience. I can even change the order of the set, so that’s kind of fun.” Menzel said that her younger self influences the performance she’ll give Long Island when she comes home.

“Now I just try to harness that younger self of mine and remember that she wouldn’t have taken no for an answer. She just knew she was good at what she did,” she said.